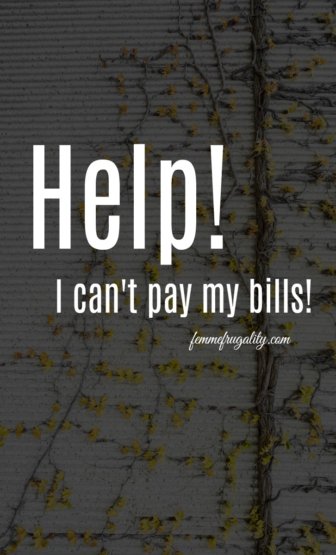 A couple of weeks ago Femme Frugality had a post go live addressing what, exactly, a good credit score is. We also talked about how you can improve your score to get into the “good” range.

But a recent study from US News & World Report would indicate that 32% of people with bad credit don’t stand a chance of finding that article–because they’re not actively trying to improve their credit.

Those numbers would make it appear as if 32% of people had just given up. Maybe they have. But maybe they just have other things to worry about–like how they’re going to pay rent or get together enough gas money to get to work.

The same study reveals that about 51% of people with bad credit have needed plastic at least once–and in many cases more frequently–in the past year just to get by. They’ve used credit to purchase items like gasoline, groceries or other household necessities.

When we consider that more than half of this group is swiping just to get by, it makes a whole lot more sense that a third of them aren’t actively working on their credit score. There are more immediate problems at hand.

I know you think you’re not poor, but…

When we think of a group of people that has problems meeting their basic needs, it’s easy to mentally classify the whole as impoverished. Their income must be crazy low. They probably live in Section 8 housing. They must not have access to resources or education. The more crude among us may even imagine someone that’s gaming the system because they’re too lazy to get a J-O-B.

Just to be clear, that last one is not something I personally would ever, ever say about welfare recipients.

But these assumptions may not be accurate. As middle-class income has become more erratic, it has become harder for families to budget. In many cases, these families have to charge household necessities after wiping out their savings for a series of unfortunate events–which usually includes a slow down or loss in one of several income streams.

Since 2000, the largest pockets of poverty have not sprung up in urban areas; it’s the suburbs that have seen the most dramatic shift in economic standing. Many of us are just one emergency away from watching our finances spiral out of control.

Whatever you consider your socioeconomic standing to be, get real with yourself, because this post is for everyone.

I can’t pay my bills.

If you are struggling so badly that you can’t meet your basic needs, get help. Welfare recipients get a really bad rap, but the vast majority of people are just trying to get through a tough time until their hard work pays off.

Humble yourself and get basic needs like food, electricity and childcare met. Qualifications are going to vary based on where you live, but look into eligibility requirements even if you think you make too much money or don’t consider yourself to be “poor.”

In many areas, those limits are higher than you may think, and simply filling out an application can make you aware of programs you didn’t previously know existed.

Maybe you don’t qualify for those programs. Maybe you can’t meet your basic needs because you’re in massive debt and your minimum monthly credit card payments are insane. If you have bad credit, you’re not likely to qualify for a card with a 0% introductory interest offer–so you feel like you’re stuck paying interest rates above 20%.

But you do have options. You could attempt negotiating with the credit card companies, though it’s more difficult with bad credit.

You could refinance and consolidate your debt into a personal loan. With bad credit, you’re not going to get the best rates, but they’re likely better than the interest you’re paying on your credit card.

If you need help figuring all of this out, you may want to go in for credit counseling. Do your best to stay away from debt relief and debt settlement firms, though, as they tend to be shady and sometimes even predatory in their dealings. Vetting a good one is difficult, so credit counseling is not only safer, but easier.

I’m not going to patronize you here. If you’re having trouble making ends meet, I totally believe you when you say you know  your budget down to the penny. Been there. Done that.

If done properly, you’re also highly likely to have a little bit of extra money left over at the end of the month. Take every penny and throw it at your debt and an emergency fund. Paying down debt should eventually up your credit score as a nice side effect. Having even a small emergency fund can mitigate the damage of the next financial emergency that is surely around the corner–it’ll keep you from having to pull out the plastic again.

This is really hard when you can’t make ends meet. But it has to be done. Do whatever you can to make sure that balance is going down instead of up. Frugality is key, here as you attack the big, monthly bills first:

The biggest problem is that you don’t have the money you need to pay your bills. Reducing your bills definitely helps that problem, but the best way to solve it is to bring in more money.

Getting a promotion at work or going back to school are great long-term plans to alleviate the stress of not having enough to pay for household necessities, but they’re long-term. And you need money today.

Find ways to hustle in your off time. I know there’s not much of it. And I know it adds even more stress to an already depressing situation. You may already feel hopeless. But if you can do this for a little bit of time, there’s a decent chance your tomorrows will be far less stressful.

Here are some hustles I picked up when going through a seriously rough financial patch:

You can also do things like temp part-time, become a brand ambassador, teach English online or become a virtual assistant. This last one is particularly good if you’re into social media–it’s a task a lot of small business owners, even bloggers, don’t always have time for.

Just because your money’s a mess doesn’t mean you’re lazy. You’re going through a hard time, and it’s a lot. You’re not alone in your suffering, but you can get through it.

While you’re worth far more than money, that doesn’t mean you can’t get a handle on it. Once you do, come back and we’ll talk about specific ways to get that credit score up.