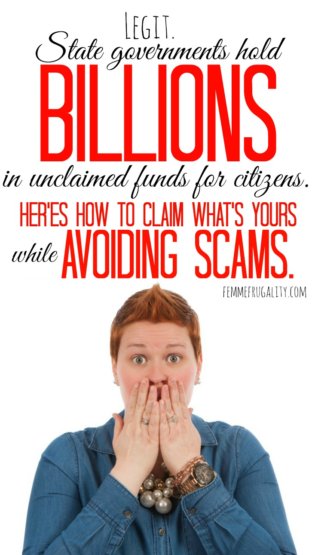 Do you have unclaimed money sitting around just waiting for you?

Believe it or not, you may, and you could find it sitting in your state treasury.

When a business or other entity tries to issue a payment to you, but they are not able to reach you, they don’t just get to pocket it. They have to deposit it with your state.

Maybe you moved and they didn’t know  your new address. Maybe you were set up on direct deposit and switched bank accounts. Whatever the reason for the discrepancy, the money must eventually makes its way to the state for safe keeping.

How to Get What’s Yours: Unclaimed Money

To check and see if you have any funds waiting, you can use this interactive tool to find the landing page for unclaimed money for your, specific state.

From there, you’ll be able to search your state’s treasury to see if there is any money waiting in your name. If there is, it will pop up with some basic information, including the last address on file and the name of the company that originally issued the payment.

You will not know exactly how much you have waiting for you, even if something pops up. In my home state of Pennsylvania, the treasury classifies funds as “over $100” or “under $100.” You won’t know the exact number until you receive the check in the mail.

Before you receive that check in the mail, you have to fill out some paperwork. You can print it out from your state treasury’s website or request that a hard copy be mailed to you. You’ll have to verify that you are the person who is owed money and sign the supporting documentation in front of a notary.

After the treasury has received your paperwork, they will issue you your long, lost check.

We did this years ago, and while we didn’t turn anything up for ourselves, we did find something for my mother-in-law. It turns out she had a final paycheck waiting for her from a past employer. She had fought them over it at the time, but got tired of the battle. Apparently they eventually realized she was right, but not before losing contact with her.

It was nice for her to receive a legit paycheck in retirement!

How to Avoid Scams Related to Unclaimed Money

Recently, the husband received a letter in the mail. In this letter, the company told him he had unclaimed funds amounting to around $2,000. They did have a specific amount, which I’m not sure how they got, but I’m not sharing his personal info on the internet.

To claim them, all he had to do was fill out the enclosed paperwork certifying that they would get a 15% cut. That would have been around $300.

THIS WAS A TOTAL SCAM.

They weren’t completely misleading—he did have unclaimed money waiting for him with the state treasury amounting to the same figure that they laid out. But they didn’t disclose that he could get the money on his own—without paying anyone commission—simply by going to the state’s website and filing the paperwork himself.

Which we did. It turns out that big check was an insurance claim that he had fought for and subsequently given up on, even though they really owed it to him. The insurance company eventually figured that out, too, though I’m not sure how they “lost touch” with him since he’s had continuous policies with them for years.

There was an added bonus we discovered, too–an over payment on school district taxes.

The moral of the story is two-fold:

You may also like: Strategize Your Way to Free Gift Cards with Swagbucks