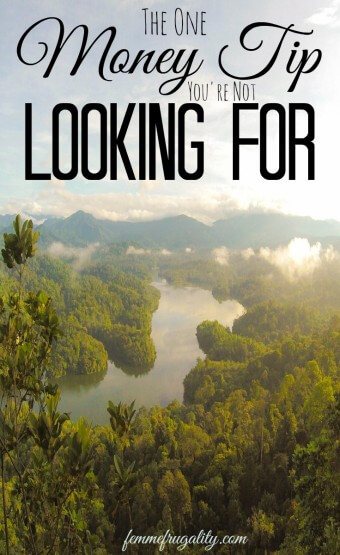 Part of my job as a content producer is researching what people are looking for on the internet. That way, I can make content that will actually get some eyeballs on it. On this site, I sometimes implement that methodology, but sometimes I write whatever the heck I’m thinking about or respond directly to my reader’s concerns.

During a recent research fest, I found something alarming. When people are searching for money tips, there’s one major strategy they’re glossing over.

People want to know how to make more money. A singular term in that strand has upwards of 300,000 people searching per month.

People want to know how to save money on the purchases they’re already making. The internet wants to know that a little over 100,000 times per month. (Again, for one singular term.)

But what aren’t people looking for?

The Money Tip You’re Not Looking For: Reduce Your Spending

When you look up “cut spending” or “reduce spending” or variants thereof, you’ll find that only hundreds of people are looking for advice. That number is in the low hundreds.

Why is this alarming?

As a personal finance blogger, and one who got her start in the realm of frugality, I find this disturbing. Making more money is awesome as long as you’re managing it properly. Saving money on the things you already purchase is pretty rad, too. I do it all the time.

But a massive aspect of managing your money is reducing your spending. If there are things you can learn to live without, you’ll never incur that cost again for the rest of your life. Then, when you implement those fab money-making tips you found online, you’ll be able to pocket more of it for your emergency fund, retirement account or whatever else you may be saving for.

It’s not surprising that in a country where 60%-70% of the GDP comes from consumption that the populace isn’t overly concerned with consuming less, but rather is focused on saving on the things that they consume or making more money, presumably so they can consume more.

How to Cut that Spending

I’m not an echelon of righteousness when it comes to cutting expenses. While we did effectively cut our yearly costs by over $4,300 with just a few life adjustments like cutting cable and switching to a low-cost phone carrier, I’ve also documented our struggles to stop spending for convenience when we found ourselves short on time.

It’s not all about being perfect, though. It’s about adjusting your sails when real life happens. There are two basic strategies I’ve implemented to help us correct course when we’re not happy with our habits or money situation.

When we cut our cable, it was really painful. Being from a sports town, we have three sports to watch, and games on just about year round. Football is the only one that’s always available on broadcast TV.

So when we decided to cut the cable, there was no getting around it. It was going to hurt. We were going to have to give up something we loved suddenly, but it had to be done. The savings was just too huge.

We ripped that band-aid off. Yes, there was initially pain. There may have even been screaming, if we’re honest. But eventually, we started listening to hockey games on the radio. We downloaded a baseball app that shows us what’s happening, including where the pitch hits in the batter’s zone, which is pretty cool. We also found a way to go to games in person for super cheap.

It sucked to pull that band-aid off. But now that we’re over that initial pain, we’re thrilled to have over $1,400 back in our pocket every year.

I’ve always tracked my spending. It’s a good way to gauge your financial habits and health, and can help you write realistic budgets moving forward.

We did reach a point for a while there, though, where retroactive tracking just wasn’t doing it for us. It wasn’t helping us make better decisions in the moment. At that point, we tried Moven, an app that beeps at you right after you make a purchase to let you know if your spending is normal, below normal, or holy-crap-you-need-to-stop-right-now-because-you’re-going-to-be-broke high.

You know what? It worked. It alters your behavior because you know there will be immediate accountability. Before you buy all the things at Target or stop to grab some food on the way home, you know you’re going to have to deal with that beep and the ensuing notification about how good or wretched your spending habits are. It’s enough to make a girl put that adorable toddler outfit we don’t actually need back on the rack.

What You Gain When You Reduce Your Spending

I’m not saying you have to go all extreme with your frugality. (Though I certainly know and respect people that have.) What I am saying is that for every dollar you unnecessarily spend, you’re giving up some of your financial stability.

You’re giving up the opportunity to have the money ready to go in your emergency fund when your tire blows. You’re giving up the ability to save some cash in your child’s college fund. You’re giving up savings and the compound interest that comes with investing for retirement. You’re also giving up time as you have to spend some of it taking care of all the crap you bought. Or working off those calories from dining out.

It may not be a money tip you were looking for, or even one you like hearing, but if you can learn to cut your spending, everything else in your financial life will become so much easier.