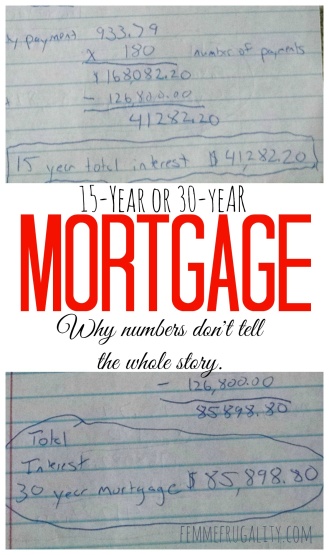 Some of you may remember that my husband is taking a course in calculus. It’s going really well for him.

A few weeks ago, his class was working on amortization tables. They were given an assignment to find a house they’d like to buy then figure out the difference in interest if they took out a 15-year mortgage versus a 30-year mortgage.

He was sitting there doing his work when I heard, “What the heck?!”

“Why would anyone ever take out a thirty-year mortgage?”

Here’s what he was looking at: 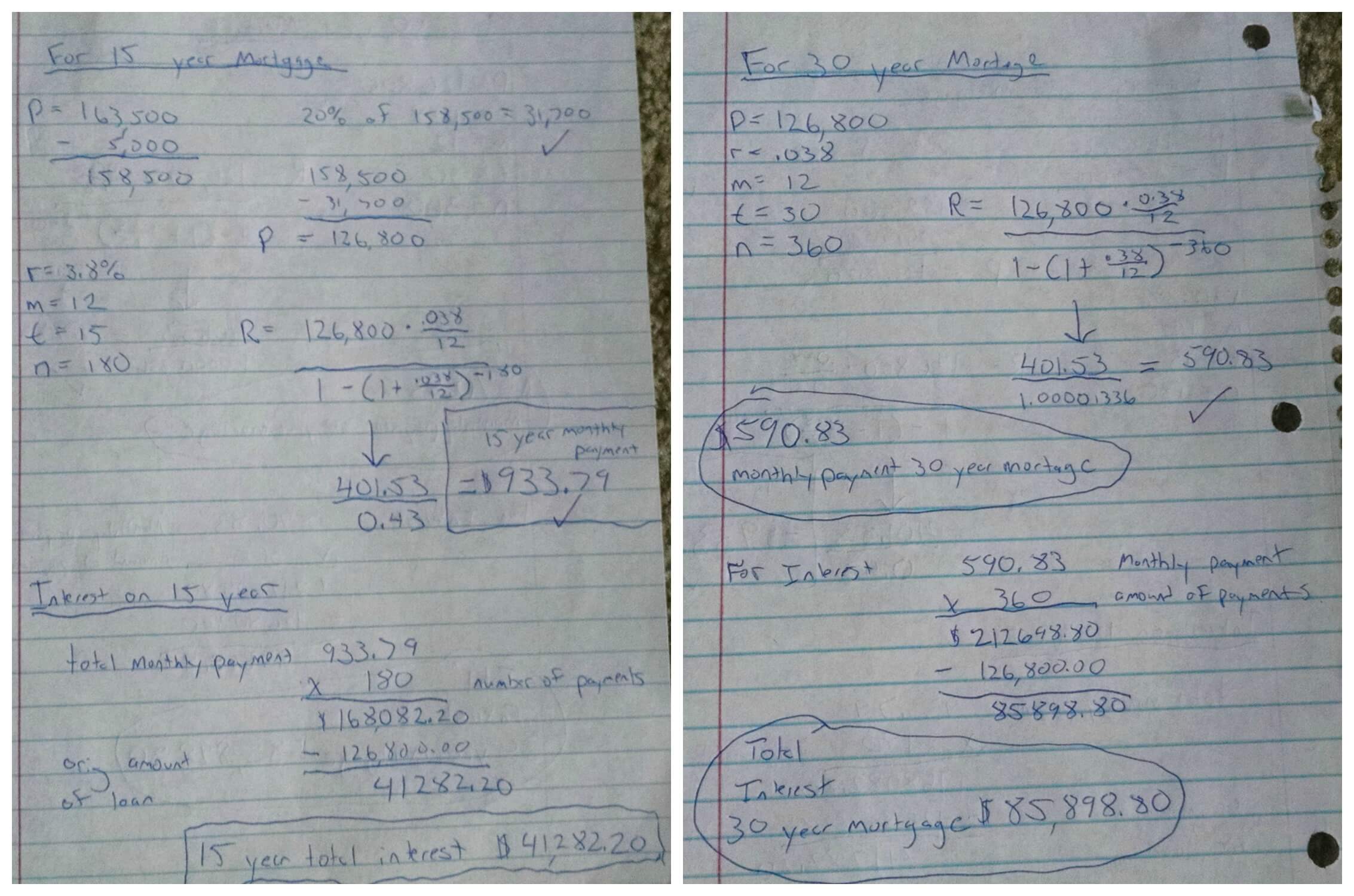 Literally the only thing that caused that $40K+ difference was the length of the loan.

Want to run your own numbers without having to do calculus? PenFed has a great tool to compare the two mortgage lengths; just enter your own parameters!

This led us into a pretty in-depth conversation about our housing situation. We’re currently saving for a home, but don’t yet have the 20% needed to avoid PMI. While we could totally afford a 15-year mortgage in the given price range, we also have pretty hefty property taxes in our county which may or may not take us outside our desired budget.

In his paper, he chose the 15-year mortgage. Because obviously. It’s way cheaper.

When a 30-year Mortgage is Smarter

Just because it’s cheaper doesn’t necessarily mean it’s a better decision, though. Our income is notably variable. Let’s say we could afford a 15-year mortgage at $933.79 per month and the additional $250-$400 per month in property taxes. And then home owners’ insurance on top of it.

What happens if we have a bad month? We could obviously draw cash out of savings. But what if we had a bad quarter? What if, like last fall, an income stream suddenly dried up? (This last one could happen to anyone, regardless of if they have a variable income or a “steady,” every other week paycheck.)

In that case, we’d be glad to have the longer mortgage with the lower monthly payments of $590.83. It would give us $342.96 of wiggle room per month, and, as long as there’s no pre-payment penalty, there would be nothing to stop us from paying off the mortgage early.

Which is exactly what we would do. Let’s say we made the same $933.79 monthly payment every month, but got the 30-year mortgage. We’d still save $39,222.71 in interest. And we would have given ourselves flexibility should we meet a lean month.

There’s an argument out there that says because interest rates are so low at the moment (3.8% in this example, and even lower for us with our preapproval,) that you stand to build more wealth in the same period of time by investing the difference between a 15-year and 30-year mortgage.

Not a strong argument, unless we used the investment to pay off the home. Then our home equity would be $158,500, plus the $15,664.64 leftover in investments. This calculation is generous in that it doesn’t include the tax bill we’d have to pay for pulling that money out of the market.

But assuming a 6% return is dangerous on a short-term basis. (I consider 15 years a short-term timeframe given my age and risk tolerance.) Then there’s the fact that no matter how it’s classified on paper, we will not be viewing our home as an investment. For many, the mental burden of debt will win out even over solid numbers that show they will be building wealth. (We’re not of that ilk, but it’s another thing to take under consideration.)

We haven’t quite decided yet. Admittedly, we probably won’t go the investment route. While the husband picked the 15-year on his assignment, the flexibility of the 30-year mortgage with an early payoff date is an enticing option, too.

What would you do?

*This post is in partnership with PenFed Credit Union.*