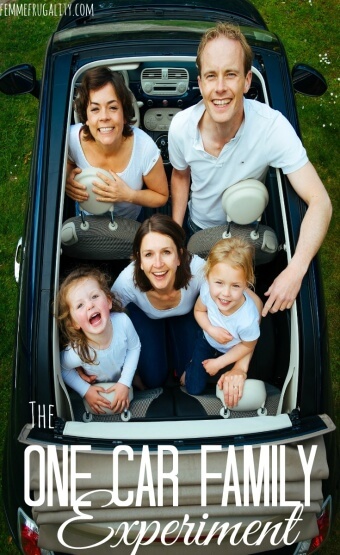 We have more than one vehicle in our family. During our entire relationship, my husband and I have never been without at least one car loan.

That’s stupid, right? We could save SO much money if we became a one car family. On financing, insurance, maintenance…the list goes on.

One of our vehicles, the one that’s actually paid off, has been giving us a lot of trouble lately. Like my-head-wants-to-explode-because-of-the-mechanic-bill problems. Last week, we had to take it in for a five-day long session while they fixed hundreds of dollars worth of additional problems.

My initial reaction was horror. How the heck were we going to survive? We had appointments and classes and all kinds of things to do, especially since the school year was wrapping up.

I took a deep breath, and decided to treat this like an experiment. This could actually be a blessing in disguise. If we could make it through the week, maybe we could just ditch that car without replacing it or sinking any more money into repairs. With the money we’d be saving on insurance, we could pay our remaining car note off in no time flat, and then use the extra money leftover every month to pay for our next vehicle in cash.

Plus, we’d be improving our carbon footprint in a big way. I’m so into it that I’m signed up for Tesla’s newsletters, but they have yet to send me one with a RSP that I can read without LOLing.

This could actually be a really good thing, if the test run worked out properly.

The Results of the One Car Family Experiment

During the course of the week, we had to get our kiddo to school, hit up baseball practice, go to various therapies, get the husband to his night classes, get him some new shoes as his were more than beat, and get to a doctor’s appointment. On top of it all, I got sick (yes, again,) and had to see my own PCP at the last minute.

On top of all of that, I had to get to work. While I work for myself as a freelancer, I don’t really work from home. I’m lucky enough to have a friend that lets me use their place and internet connection to type and edit words on a screen while they’re at their 9-5. It provides me with quiet solitude while my own home, full of young children, provides chaos. My friend’s place is not in my neighborhood, so I typically commute. In the second car.

The unexpected hiccup that we came up against was my own doctor’s appointment. I could only get in half an hour before the other, conflicting family medical appointment, and to get between the two offices we had to cross downtown. So I was dropped off at mine and had to wait until the husband could come back and get me.

It was inconvenient, but not really that tragic. I walked a mile to go get some lunch and he just picked me up there. I checked bus schedules, but nothing could have gotten me to my appointment on-time, and him picking me up was much quicker than waiting for the next bus home.

The bad part was my work. Over the course of the week, I only got to my friend’s place for a couple of hours over the entire five days. I did meet all deadlines by working at night, but I typically like to be ahead of the game. Being ahead mitigates emergencies. Like when the car breaks down.

Because of the surprising lack of public transport in our neighborhood, getting to my friend’s place would’ve taken hours. Those are hours I don’t have with all of my familial obligations. If I have to choose between getting my kid or husband to school while working nights or working days while they’re stranded, I’m going to choose night hours.

But that’s not really good for my health. Besides the mental burden of going all day knowing there’s a pile of work waiting for you after everyone’s in bed, my sleep got all out of whack. While the arrangement served as barely functional for a week, overall I have to mark it as a failure. That type of schedule is not sustainable for us on a long-term basis.

My heart is a little bit broken. I really want to save the planet. If Stephen Hawking says we’re all going to have to hop in space ships within 100 years and only the rich will get a ticket to ride, I want to do everything I can to help make that nightmare a fallacy.

But what to do when it isn’t functional?

Ways We Could Become a One Car Family

Plan better. Public transport may be inconvenient, but if we completely revamped our schedule and I was cool spending hours commuting, we might be able to make it work. Though it would remain terribly inconvenient. I’ll be mapping this out more in the near future to see if we could make the dream a reality. I still don’t know what we’d do about emergencies like last-minute doctor’s appointments, though. Or me going into work on the rare occasion where I still work my old day job.

Move to a different neighborhood. Perhaps one that was more of a central hub for buses so I wouldn’t have to transfer so much.

Move to a new apartment. Theoretically, I could work at home, but our internet doesn’t reach any of the rooms that have doors to close out the ruckus. If we moved to another apartment with thinner walls, this problem could be potentially alleviated. I would likely not be as productive since everyone would know where I was hiding, but maybe the routine would eventually get everyone used to it. The problem with this is that rents have inflated a lot since we first moved into this place, so it likely wouldn’t be a cash-positive move.

Get a new modem. This is the most likely one to happen. Maybe if we got a more powerful modem we wouldn’t even have to move to a new apartment.

Buy a house in the burbs. This is our goal for the next couple of years, anyways. Counterintuitively, moving to the suburbs may cut down our needs for more than one vehicle depending on if the husband is location independent or not after he graduates and how close the new place is to a park’n’ride. We plan on adding one bedroom above our current living situation, and in our area most houses have some type of basement. I don’t care if it’s finished or not; I can set up shop away from everyone else with a layout like that.

Do you think you could downgrade to a one-car family? Or even just eliminate your vehicle altogether? What would you need to do to make it happen?

23 thoughts on “The One Car Family Experiment”