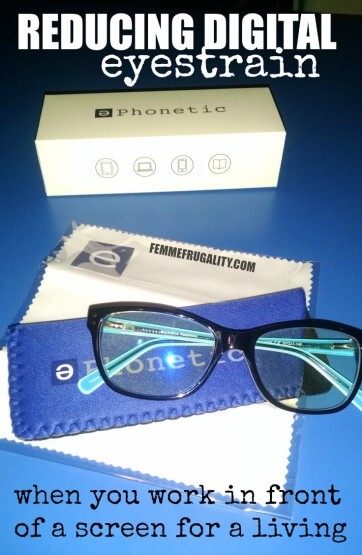 In the past year, a large portion of my income has shifted to my online endeavors. That means more and more time in front of screens. There are good things and bad things about that. On one hand, technology allows me to work from anywhere. On the other, I pretty much have to stare at a screen during the hours I’m producing income-earning work.

I was starting to feel the effects. My sleep was messed up, which was making me crazy grumpy. My eyes were starting to dry out, and I started noticing that my vision was declining. It was odd because the next day, my vision would get about +20HP. Then by evening, I’d be squinting to read again.

I’m not the only person who has had odd health problems after switching to online work. After upping the ante on her online work, Sarah started having trouble with sleep, too, and got an insane migraine. Ruth recently had to take a step back because of a headache that lasted almost a week and neck pain.

The Mayo Clinic lists all of these as symptoms of eyestrain, with one of the biggest causes being too much screen time. Both Sarah and Ruth were advised by medical professionals to make a few changes, including cutting back on screen time. I didn’t go to the doctor, but I’ll get to why in a minute.

The good news is that eyestrain in itself will stop if you just stop doing things that are bad for your health, like staring at a computer screen all day. Screens of all kinds, including tablets and phones, create blue light, which is terrible for your health.

But for those of us who can’t just stop using devices because we’d lose our living, Harvard Medical School has another suggestion: wear glasses that block blue light when you’re in front of a screen.

Typically, when you shop for blue light blocking glasses, you get something like this:

Or something that will turn your whole world orange:

A week or two into my dry eyes and blurry vision (but months into my bad sleep patterns,) a local company called Phonetic Eyewear reached out to me to see if I’d like to try their product. They make blue light glasses that aren’t weird colors. They also have frames that actually look good, and offer their product in either prescription or non, so you don’t have to wear two pairs at once like Super Dork.

I picked my frame, the Caitlin in Black Blue Raspberry: 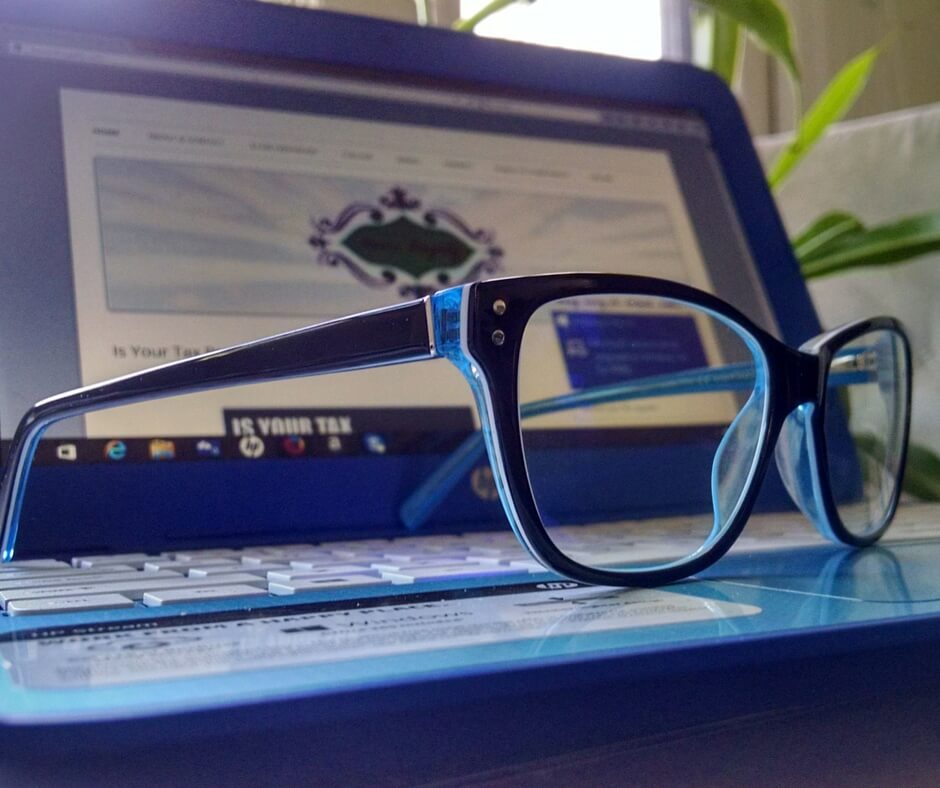 And they are awesome. I can see again, consistently, and I don’t even have prescription needs. My eyes no longer dry out on a daily basis. And, the most surprising part to me, my sleep patterns are about a million times better.

I thought my sleep was messed up because I lead a busy life, and just wasn’t getting enough of it. Then it got better after I started wearing the glasses, and I found out it was one of the symptoms of digital eyestrain. It turns out, I do have enough time for sleep. I just need to prevent the blue light from messing up my sleep patterns.

When I look through the glasses, I don’t notice anything different. It feels like I’m just wearing a clear lens. But when I hold them up to a screen, I can see that they’re literally reflecting away the blue light. I made a video to show you what I mean:

If you’re not having symptoms of eyestrain, it’s not a bad idea to take preventative measures because the symptoms aren’t fun. If you are, I’d highly recommend trying out blue light blocking glasses. Let’s face it: not looking at a screen isn’t an option for many of us.

In my opinion, the product is well worth the price as I’ve been seeing some immediate results. It’s also not the most expensive product on the market, especially if you try to get the same thing through a doctor. If you choose to buy from Phonetic, which I also recommend, you can save 10% by using code: FEMME10. (Just be sure to use all caps as it is case sensitive.)

Have you ever experienced eyestrain? What did you do?

This post is in partnership with Phonetic Eyewear. Regardless, all opinions are 100% honest and 100% my own. Using the promo code not only saves you money, but also supports this blog.