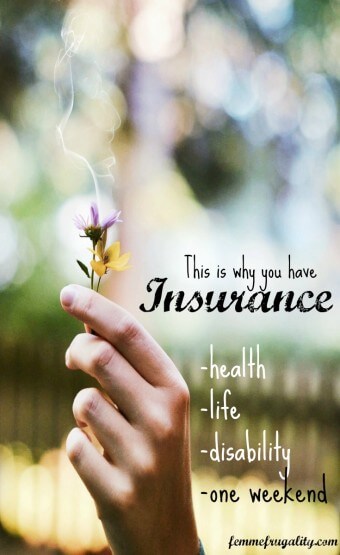 This past weekend I got sick.

By the time my mom convinced me to go to the hospital, I had tried all kinds of ways to get it out of my system. I hydrated. I attempted sleep. I tried sweating it out. Taking a cold shower. Taking OTCs. Moaning on my bed.

None of it was working. So to the hospital we went, health insurance in hand. Honestly, it was kind of scary. They interviewed me. Shoved something up my nose to test for the flu. Had the test come back negative. Then they drew my blood.

They started talking about all of these potential diseases and deficiencies. Kidneys and liver. Family history.

And then they left the room while I was hooked up to an IV bag.

Later, my husband told me that at this point, the first thing he found himself thinking was:

If my wife dies, how the heck am I going to take care of the kids?

Fair question. Though he was probably smart to keep it to himself in the moment.

We split our tasks pretty equitably in our house. Whenever one of us has “free” time, we’re watching the kids so the other can go to work or school. We’re getting dinners ready, driving around to activities and doctors, or just flat out entertaining the most tireless of audiences.

I’m also the primary bread-earner in our household at this moment in time. So losing me would mean losing more than a decent chunk of our income.

I was still kind of surprised with his concern, though.

I have life insurance.

This is exactly why I have life insurance. The policy would replace my income, plus get some platinum childcare, for about four years. That’s definitely enough time for him to finish school and then have a good bit of time to look for employment.

I get it, though. It’s not all about money. It’s not all about income and childcare expenses. It’s an emotional toll. It’s the relief we provide each other. It’s about parenting being the hardest job ever if you give a damn about it, and the fact that losing your partner in your joint vocation would be devastating.

I’m not dead yet.

After much testing, they eventually found out that I had something that could simply be treated with an antibiotic. It was an emotional journey to arrive at a simple answer. But I’m on the mend.

And I swear I’m going to get to all of your emails.

While I was there, though, waiting for those tests, waiting for a diagnosis, I had some time to think. (In between repeated cringes of pain, that is.)

As I was contemplating my mortality, money didn’t pop into my head once. My biggest focus was on recovery. On just getting the heck better.

But what if I didn’t? I wanted more time with my kids. More cuddles. More smiles. More years.

I wanted the people in my life. Not more cash. Not more stuff. Not even any specific, monumental experience. It’s those social ties that are important above any other desire.

I also had in the back of my mind that while I was scared, my fears were probably irrational. No tests had come back positive yet. As far as I knew, I’d most likely live.

And I did. I’m recovering like any normal, young person would from a minor illness, even if it felt like a huge one during the days it invaded my body.

19 thoughts on “This is Why You Need Insurance”