Note: This post may contain triggers for those who have been in abusive relationships or been through sexual assault.

The month of October is Domestic Violence Awareness Month. To highlight the issues that victims face physically, emotionally and economically, Femme Frugality will be discussing the issue every Friday. Except this Friday, I got the post up late. My apologies.

We will explore these issues through a mix of stories, conversations and factual articles. To help raise awareness, please use the hashtag #DVAM when sharing these articles. 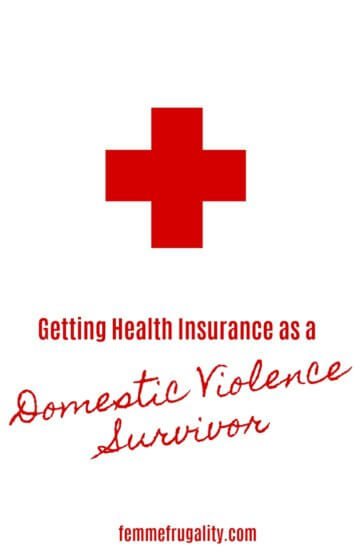 There’s a lot of financial rebuilding to do after you’ve escaped an abusive relationship. Just some of the things you may have to worry about are:

All of these things are important, and necessity may dictate that you handle them all immediately.

However, you’re also going to be dealing with some other pretty serious stuff after you leave. First, you’ll need to work with a professional to make sure you are safe.

But even after you have that basic need covered, you’ll likely be battling the after effects of psychological, emotional and/or verbal abuse, which can escalate as far as PTSD and can prevent you from doing seemingly simple things like paying the bills, filling out the welfare application or holding down a job even if you’re extremely well-qualified for your position.

For this reason, it’s important to make sure you have mental healthcare services. Healthcare itself can be cost-prohibitive, though, so today we’re going to look at some ways you can get your hands on health insurance as a first step to getting your financial life back on track.

In the States, you are required to carry health insurance. If you don’t, you’ll have to pay a tax penalty–though that penalty is eliminated starting in the 2019 tax year.

But you don’t want to dodge a tax penalty. You actually want healthcare services. Usually, you can only apply for health insurance through the marketplace during open enrollment, which is November 1 through December 15 this year.

However, when you leave a domestic violence situation you qualify for an exemption, and can apply for coverage right away even if it’s the day after open enrollment closed.

You may have lost your health insurance when you left your abuser. You may not have had it in the first place, or you may have had to leave the employer who provided you with your insurance thanks to the abuse.

Some states have not expanded Medicaid at all, though, so you may not qualify for this free or close-to-free coverage even if you are living below the poverty line. Instead, you’ll have to pay for an ACA Marketplace plan which will be subsidized based on your income level. States that have not adopted Medicaid Expansion are:

Virginia’s Medicaid Expansion will kick in on January 1, 2019, and Maine was supposed to have expanded by now, but the governor has been illegally blocking implementation.

What if I don’t qualify?

If you don’t qualify for Medicaid, you should still apply for it through the marketplace anyways. This will allow you to purchase a marketplace plan.

If you really, truly feel like you can’t afford your health insurance off the marketplace–even with subsidies–there are a couple of other options.

First, you could forgo health insurance and seek mental health care elsewhere. Your local domestic violence shelter is a good place to seek out these services. You may not be able to get a bed as many of these shelters are frequently full, but many times they can connect you with mental health care.

I don’t like the idea of you forgoing health insurance. Even though the tax penalty is going away, it’s still a risky gamble to go without it. You may find yourself needing healthcare outside of mental health services, and if you’re caught without health insurance, that could mean financial ruin via medical debt.

Another option is to go through a Healthcare Sharing Ministry. You pay a smaller monthly fee, and then the group will use the pooled fees to cover your medical expenses when needed. There are a few problems with this method:

Getting access to quality health insurance in the United States is still a difficult task, though it has gotten easier in the years since the ACA passed. The good news is that because you are a domestic violence survivor, you will actually have an easier time getting a policy thanks to the open enrollment exemption. That doesn’t guarantee you’ll be able to get coverage, but it does mean  you should have a slightly easier time than the general population as a whole.

You may want to call around to different therapists who will accept your insurance at the same time as you are applying for it. In many parts of the country, mental health is understaffed. It’s not unheard of to end up on a wait list. The sooner you can get on that list, the better.

1 thought on “Applying for Health Insurance as Domestic Violence Survivor”