October is Domestic Violence Awareness Month. In recognition, Femme Frugality is running a series on the topic every Monday. This series will include a mixture of factual pieces and personal stories.

Please use the hashtag #DVAM2017 when sharing this article on social media.

Note: This post may contain triggers for survivors of abuse. 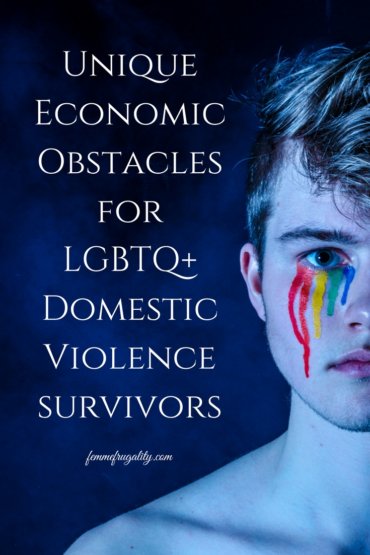 Over 35% of American women have experienced intimate partner violence (IPV.) While violence isn’t a prerequisite for financial abuse, when physical or sexual abuse is present, 94%-99% of the time, financial abuse comes along with it.

When we think of of abuse, we typically think of women in relationships with men. We assume these women are heterosexual, even though they may fall on a different point of the spectrum of sexual orientation. For example, bisexual women or pansexual women may be in a relationship that appears to meet our cultural perception of heteronormativity.

Financial abuse is a problem here, too. In fact, there are additional forms of abuse LGBTQ+ individuals are subject to. These abuses affect their personal finances in real and potentially devastating ways.

What is financial abuse?

Financial abuse is when your partner attempts to entrap  you in a relationship by robbing you of your economic power. Abuse in all its forms is a way to assert control.

Your partner doesn’t have to be the primary breadwinner to pursue financial abuse. You can be bringing in the money and still be robbed of your control, and therefore your ability to leave.

To learn more about financial abuse, read this article.

Prejudices against the LGBTQ+ Community

We have come a long way in our country towards equal rights for some parts of the LGBTQ+ community. But we still have a very long way to go.

We hold prejudices we don’t even think about as we go about our day-to-day lives. We systemically oppress and allow these prejudices to influence policies and laws. This behavior is dangerous at all times, but it has a particularly pronounced effect on LGBTQ+ survivors.

Andi Tremonte, advocate with OUTreach Utah, defines heteronormativity as, “the assumption, in individuals or institutions, that everyone is heterosexual, and that heterosexuality is superior to homosexuality or bisexuality.”

Heteronormativity has real impacts on employees in the workplace — whether or not they are in an abusive relationship.

Heteronormativity gives birth to homophobia, which Tremonte describes as, “the irrational fear of homosexuals, homosexuality, or any behavior, belief or attitude of self or others, which does not conform to rigid stereotypes for relationships and attraction.”

For as hard of a time as our culture has denouncing heteronormativity, we have an even harder time distancing ourselves from cisnormativity.

Tremonte defines cisnormativity as, “the assumption, in individuals or institutions, that everyone is cisgender, and that being cisgender is superior to being trans.”

Cisgender simply means that you express the gender you were assigned at birth in a way that is viewed as acceptable to our society.

The thing is, gender expression is a spectrum, too. In fact, Tremonte notes that you’ll find a wide array of identities and expressions when you look at the trans community.

Cisnormativity can lead to transphobia, which Tremonte says is, “the irrational fear of trans people, transgenderism, or any behavior, belief or attitude of self or others, which does not conform to rigid sex and gender-role stereotypes.”

Financial Impacts of Heteronormativity and Cisnormativity on Survivors

Heteronormativity and cisnormativity in and of themselves inflict financial oppression.

Until June of 2020 when federal protections were officially acknowledged by the Supreme Court for the LGBTQ+ community, in states without appropriate Non-Discrimination Acts (NDAs,) workers could be fired simply because their boss thought they may fall outside of heteronormative or cisnormative cultural expectations.

Employment isn’t the only area of concern, though. There are separate NDAs — or lack thereof — for the following areas, too:

Because it is legal to discriminate in these areas in some states based on your sexual orientation or gender identity, you can run into some really serious financial problems if you are outed.

Tremonte notes that especially for trans individuals, it goes beyond finances: Being outed can be the difference between life and death.

LGBTQ+ survivors face unique types of abuse that heterosexual and cisgender survivors typically do not: Cultural abuse and identity abuse.

One way these types of abuse manifest is when someone threatens to out you. They may out you for being gay, for being transgender, for being HIV+, etc.

Those who aren’t LGBTQ+ can face these types of abuse as they relate to religious practice or immigration status.

Cultural and identity abuse leak into so many areas of your life, including your personal finances. Because of the country’s generally weak stance on protective NDA laws, being a victim of cultural or identity abuse has the very real potential of making you permanently unemployable, homeless, or — as Tremonte pointed out — dead.

He also notes that a lack of NDAs are not just a concern for the LGBTQ+ community; if you are simply thought to be outside the bounds of heteronormative or cisnormative biases, you can face the same consequences.

What You Can Do About It

All of this can feel extremely overwhelming. But there are things you can do to help make the situation better.

Survivors: Know That You Have Rights

Leaving an abusive relationship is difficult for anyone, but when you’re not an apparently straight woman, things get even harder. There is limited shelter for men, and prejudices have historically made it difficult for LGBTQ+ women to get the help they need.

However, in 2013, the Violence Against Women Act was updated to provide more protection to the LGBTQ+ community. You can read about the updates here.

Voice Your Support to Your Legislators

In 2020, the LGBTQ+ community was finally acknowledged in protective employment laws that previously only extended to straight women in the eyes of the courts.

This doesn’t solve everything. We still need to keep putting pressure on our state  and federal legislators to further enforce LGBTQ+ rights in codified law.

Type in your address to find those that represent you at the federal level.

Select your state from the map to see the legislators that affect state laws where you live.

The legal acknowledgement of gay marriage was only achieved after decades of advocacy from the LGBTQ+ community. When the Supreme Court was finally convinced that American public opinion had shifted, equal rights in one realm were realized.

But we still have a long way to go, and equal rights in other realms are still out of reach. You have a voice. Use it.

When you see heteronormativity or cisnormativity in action, call it out. It doesn’t matter where you notice it — at work, around the dinner table, or coming out of your own mouth. Things are not going to change, and LGBTQ+ survivors will continue to face additional barriers in leaving abusive relationships, until we change public opinion and therefore legislation.