October is Domestic Violence Awareness Month. In recognition, Femme Frugality is running a series on the topic every Monday. This series includes a mixture of factual pieces and personal stories.

The final post of the month is contributed by Kenisha Burke — a Communications Professor, Author and a Motivational Speaker. She has spent years motivating and inspiring audiences to tell their truth and empower themselves.

She is the author of Silence No More and a motivational speaker.

Please use the hashtag #DVAM2017 when sharing this article on social media.

Note: This post may contain triggers for survivors of abuse. 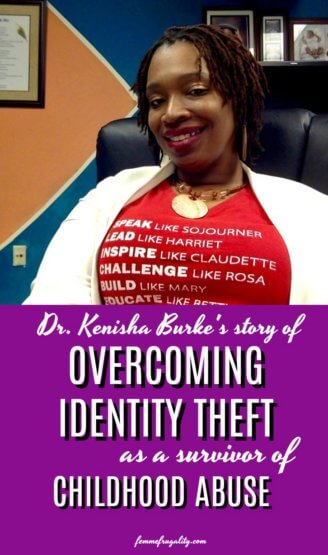 I grew up in a home where I never knew if the electricity would be on, the car would be repossessed or if there was enough food in the refrigerator. I was thirteen years old when my mother forged my age on a document so that I could get a job.

For most of my life I did not know this was unusual, but money is an issue for people from my community. A lack of education placed my family in a perpetual cycle of financial crisis where more was spent than earned, and there was never a nest egg to fall back on.

I will fully disclose that I am a survivor of childhood sexual abuse and that lead to some of my naivety as a child and a teen. I had to hide from people and keep secrets. As a result, I did not interact with people on the same level that other children did.

Entering the workforce at thirteen made me realize that my family needed money. Every time I got paid, I was asked to provide funds for a bill or food. When I was sixteen, I was working almost full time while attending high school.

I had no concept of credit or financial responsibility. I did not even know what it was. I watched my family bounce checks and accumulate bills — never thinking of the consequences.

My main concern in life was to do well in school so I could leave home and escape my abusive household.

When I was a freshman in college I found out that I had bad credit.  This discovery changed the course of my life.

I remember walking through the quad and seeing all the credit card vendors soliciting. I stood in line with several of my friends to obtain my first credit card.

The exact same week a friend questioned me about not having a cell phone, which was something I had never even thought about. I did not have anyone to call and never really saw the need. My new friends were outraged that I did not have a phone and said that I needed one for safety purposes.

I thought about it for a while and a few weeks later, I went to the mall to obtain a cell phone.  It was while I was at the cellphone kiosk that I found out that I had bad credit. I was turned down for a cellphone account because of my credit.

The same day when I arrived back to my dorm I received a rejection letter from the credit card company.

I was upset and confused because I knew that I had never obtained anything with my credit before. The credit card denial came with the notification that I could obtain my credit report to find out why they turned me down for credit.

I contacted the credit agency and requested my credit report.  While I was waiting for the report to come, I started doing research on credit.

When the report arrived, I was already aware of the consequences of these denials. What I was not prepared for was the amount of debt that had been accumulated in my name. I was thirty thousand dollars in debt and some of the accounts had been opened in the last year.

I Can Fix This

I contacted the campus lawyer and brought him my credit report. Thinking the bills were created without my knowledge and I was not old enough to create these bills, I was confident I could fix this and be able to start my life without bad credit.

The campus attorney told me that to remove the items from my report I would have to press charges against the person who created the accounts.

That person was my mother.

I knew it was my mother because she was the only person who had access to my social security number.

When I contacted my mother to ask about the information on my credit report, she acted as if it was no big deal. She admitted to using my credit and said she would take care of it, but I knew she wouldn’t.

I never had the heart to press charges against my mother. I had bad credit and I could either pay the bills or wait seven years for some of the bills to be removed from my credit report.

My Solution to Economic Abuse

I went through college ignoring the fact that I had bad credit. I paid for everything in cash and if I could not afford it I did not buy it. I was supporting myself financially with two jobs while in school. I was unable to go on spring break or take road trips with my friends.

I was eventually able to get a cellphone in my senior year of college, when cell phone companies allowed people with blemished credit to get accounts.

After graduation, I found a car lot that would sell to consumers with poor credit and obtained a loan. I made sure to pay that loan on time, and within a few years I obtained a secured credit card.

I started to create positive credit in my name and payed for a credit monitoring service so I would know if any new accounts were opened in my name.  My mother tried to use my credit again, but I was notified by the monitoring company as soon as the attempt was being made. As a result, no more fraudulent accounts were ever established.

Where I am Today as a Survivor

I have done the hard work of repairing my credit on my own. It was not an easy journey. I am hypervigilant now about my credit and bills, but that is just a result of my past experiences. What I have found out is that I am not alone–there are a lot of children who have bad credit.

It is called identity theft, but it is the one that seems to be the least prosecuted and the easiest for parents to do. Until something is done to prevent the abuse of a child’s social security number this will remain a problem in America. Financial literacy is not taught in many schools, and most children will not know until they are adults that they have bad credit.