What is financial abuse?

When we think of domestic violence, we typically think of the last part of the word: violence. We think of it practiced physically and sexually. While this is a very real part of the issue, there are several ways that abusers exert control.

One of these types of abuse is financial abuse, also commonly referred to as economic abuse. This is one of the most common ways abuse is perpetrated, but it is so seldom talked about that the term isn’t even found in many of our most-used dictionaries.

Here’s a definition for you: 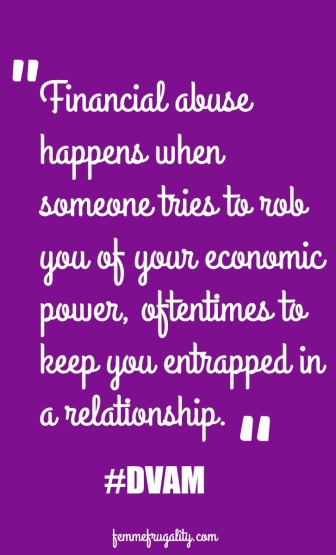 There are so many ways that someone can try to control you through money. Here are a few:

All of these things make it extremely difficult to leave the relationship, even if you want to. It’s emotional, but it’s also incredibly practical. How are you going to get a job with no job history? How are you going to manage finances if you’ve never done it before? How are you supposed to get back on your feet when they literally control all of your assets, both long-term and liquid?

Financial abuse contributes to the homelessness of many survivors, and can make it difficult to establish financial security even years after leaving.

Why does abuse happen?

If you are in an abusive relationship, know that it is not your fault. As much as the offender may tell you that you’re to blame, there is no deficiency inherent in you that’s causing this.

Abuse happens because the offender is seeking control. Many times, they feel out of control in their own lives, so it makes them feel better to try to control you.

You cannot fix their behavior. They may be able to change, but it’s not very likely to happen. The want for change has to come from within themselves. Then, they must actually work at it.

Who does domestic violence affect?

But that number doesn’t tell the whole story. In that same study, twenty-three percent of men living with a male partner reported experiencing IPV.

What are the effects of abuse?

Obviously, none of the effects of abuse are good. Unfortunately, there are many of them.

We’ve already talked about how this can affect survivors on a personal level, but some of the national statistics are shocking.

How can I get help?

If you find yourself experiencing any type of abuse, check out these resources. Be very careful not to make any big decisions about your relationship until after talking to a trained professional as these situations can turn dangerous very quickly. But do know that there is help available. People do care, and there is hope.

28 thoughts on “What is Financial Abuse?”