Today an anonymous reader joins us to share their story about the other side of financial abuse. While some partners exercise this abuse by limiting the amount of income you are able to bring in, others will go to the opposite end of the spectrum and take advantage of you if you are the sole or primary breadwinner.

Thank you to today’s contributor for having the courage to share their story, and for having the wherewithal to acknowledge that this, too, is financial abuse. 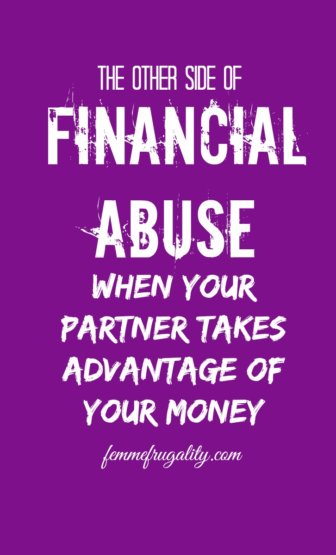 I don’t like to think that I was in a financially abusive relationship. It’s hard to see it that way. Horrible to think that the person you love would take advantage of you.

But if it had been somebody else’s relationship that I was observing as an outsider, I would have called it financial abuse without hesitation and urged her to call it quits a lot earlier.

I can’t pinpoint exactly when a once functional relationship deteriorated into an unhealthy one. I suspect it was a slow and gradual decay rather than an overnight switch.

All this happened over the course of couple of years. He was in and out of employment during this time, with some temp/contract/casual stints in there too. In the meantime I changed jobs twice, enjoying significant pay rises each time. It hurts to think about how much further ahead I could be by now if we’d both been working that whole time – but there’s no point dwelling on what could have been.

In a way, I think that exacerbated the issue. I was bringing in even more than before, so what was the problem? Numbers-wise, I could support us both, so that gave him some room to figure things out, right? Earning more eased the pressure for sure, but it made me even more resentful, because I wasn’t really able to benefit from the money personally.

At the same time, I was also hustling and freelancing on top of all that. Busting my ass to earn as much as I could so that I could actually save money even while supporting two people on my income.

If I was underemployed or unemployed, you can bet I would be sticking to a budget. Looking for every opportunity to save money. Putting 150% into job hunting. Doing anything I could to earn money wherever I could. And taking care of everything at home.

The same was not true in reverse. Overspending, instead of frugality. Not pulling his weight around the house. What often seemed to be a half-hearted effort at job searching. And most egregiously, lending money to others – small amounts here and there, but still, lending my money, without asking. Nearly every time I logged in to look at our account history I would find unpleasant surprises. After multiple instances of this, I realized I could no longer trust him.

I accept and understand there were almost certainly issues at play on his side – loss of self confidence, maybe even mild depression, etc.

But what it came down to was the fact that the toll of being the sole income earner (while he failed to contribute to the relationship in any significant way) was seriously impacting my well-being – physical, mental, emotional. Stress is a killer. It finds its way out, one way or another.

I stuck in there until I could no longer ignore the ongoing effects on my health. That’s when I knew things had to change.

I felt like I was letting him down. Abandoning him at his lowest. I worried about what he would do and how he would support himself. But I realized that ultimately, I am not responsible for anybody else. I had willingly shouldered that burden for so long, and the only thing stopping me from letting it go was myself.

There’s a great list in this BBC piece on the 10 common signs of financial abuse that I recently came across. In hindsight, I could have ticked off a few more of those than I’d like to admit.

In my case, supporting a partner through a rough patch devolved into being taken for granted and taken advantage of, whether or not either of us truly realized it at the time.

11 thoughts on “Financial Abuse: My Partner Nearly Drained Me Dry”