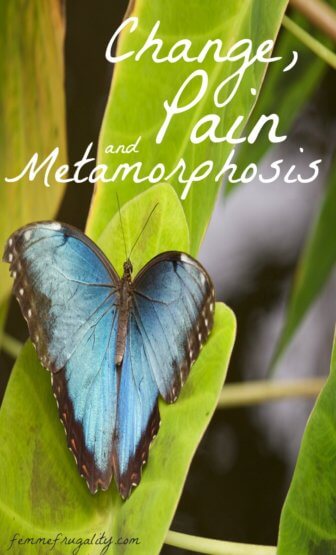 There’s this show on Netflix called Beat Bugs. My kids love it because it’s geared towards their age group. I love it because I’m in awe that I lived to see a day in which the rights to Beatles songs are distributed so liberally.

Every episode, the bug crew meets a challenge that a Beatles’ song helps them conquer. In a recent episode we viewed, the bugs put on a birthday party for their caterpillar friend. She was feeling ill, and it bummed everyone out.

She pulled herself back to her home, lamenting the fact that she could no longer enjoy the things that once brought her happiness. Despite wanting to enjoy the party with her friends, something inside of her just didn’t feel right. It was painful and depressing.

She wraps herself up to rest in her chrysalis, feeling alone and tormented.

When her friends come to find her, she busts out of her chrysalis as a butterfly. Those growing pains and dis-ease that she felt were necessary parts of the process of her development into something new and beautiful.

She loves being able to fly. She can look at everything around her with new perspective, appreciating all the beauty the world has to offer in new and exhilarating ways.

When I was young, change was something I looked forward to. Not knowing what was next was an exciting concept that allowed for adventure and discovery.

Maybe it’s simply something that happens as you age.

Regardless of the cause, I, like most people, became that caterpillar who didn’t like the feeling of discomfort before crawling into my chrysalis. In fact, the prospect of the pain scared me so immensely that I’d avoid crawling into it at all.

It’s silly, of course, because the pain persists as long as you resist necessary change. It’s the fear that prolongs the process and prevents you from becoming a butterfly. From seeing the world anew. From finding new paths to stability and empowerment. From becoming this beautiful creature that can freaking fly.

Accepting the new-found pain that accompanies change in my life has been difficult. But it’s something I’m learning I must face with bravery and courage in order to grow wings.

This can happen in an array of different areas in our lives. Maybe you have a ton of debt to pay off, but you know confronting the realities of your finances is going to be overwhelming and depressing, so you ignore it, digging yourself in deeper all the while. If you just accepted the pain of looking your money problems in the face, you’d be able to do the work to get to a point where your situation was better.

Maybe you’re in a toxic relationship, but still love the person. We had a reader contribute her story on this very topic a few months ago, and making painful decisions was the first step in getting her life back to a happier place.

Maybe you need to push yourself outside of your comfort zone in order to grow in your career. The initial feelings of inadequacy are anxiety-producing, but without confronting them it’s improbable that you’ll gain the new skills and network that you need in order to progress.

[Tweet “Sitting in the same place is the path of least resistance, but it doesn’t lead to happiness.”]

Sitting in the same place is the path of least resistance, but it doesn’t necessarily lead to happiness. Feel the pain. Feel the suffering. Know that those feelings will eventually pass, and that your new wings await you on the other side.

Music to Help You Cope with Change

In case you’re curious, this is the song they integrated into that Beat Bugs episode. They removed the bits that referenced death and implied sexual relationships because their target audience is about four years old:

While I do love In My Life more than words can say, a song that helps me get happier when I’m facing down the fear that comes with change is this one:

Have you every battled fear before making a major change in your life? How did you overcome it?