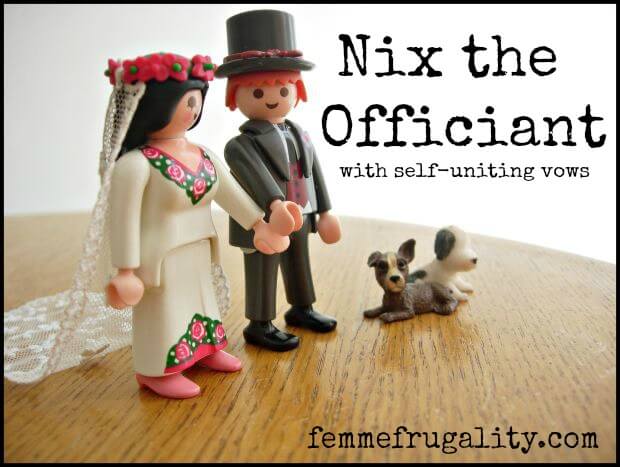 We are not particularly religious people.  Okay, we’re not religious at all.  We try our best to be spiritual, good people.  Just not in an organized, Sunday-church-going type of way.  So a church marriage was just not “us.”  We’ll just be getting married at our reception site by a family member who is ordained.

But let’s say we weren’t lucky enough to have that option.  It would be super weird and inconvenient to pay a religious leader we didn’t know or really even support to officiate our vows.  Or what if we were atheist and didn’t want to go to the Justice of the Peace?  Or get married on a boat or by a mayor?

Pennsylvania can be pretty cool.

Luckily, we live in the great state of Pennsylvania, where reverent, God-fearing people have accidentally paved the way for modern-day heathens.  (At least I’m sure that’s how the 1700s group would view us.)  Quakers played a huge role in the foundation of this state.  One of the many laws that reflects that is self-uniting marriage.  Because they traditionally have no clergy, when Quakers marry they don’t have an officiant, as it’s God marrying  them, not any man.

This is why for all of its history Pennsylvania has allowed self-uniting marriages.  So if you want to just write your own vows, you can.  And skip the clergy fee.  (Just make sure you have two witnesses.) I think it could be kind of beautiful.  (Though I’m happy with our decision to have our family member involved; it means a lot to us.)

When you go in to get your license, be sure to mention right off the bat that you want a self-uniting marriage.  Do your research before you apply.  Some clerks might be jerks and refuse to give it to you.  If you do get a jerk clerk, you really could, and I’d argue should, throw this ACLU case in their face.

Essentially what happened was that Allegheny county asked a couple if they were Quakers. They said no.  So they refused to give them the license.

Let me recap:  they asked them their religion, and because of their answer, refused them a government service.  Allegheny county screwed up royally.  So from what I understand they are now much more accommodating to couples who want to take the self-uniting route.

I also understand that they do not charge a fee for this service.  This is not true in all counties.   UPDATE:  A reader was recently issued a self-uniting marriage license in Philadelphia county.  Contrary to how it is presented on their website, the fee for that county is only an additional $10, making the entire affair $90 TOTAL.

Planning a wedding on a budget? Get this free budgeting template!

Other states offer self-uniting marriage, too.

Here are some states that offer similar options, or just options that may be better for some more secular couples:

If you know of any other pretty cool state marriage laws pertaining to the officiating, let me know and I’ll add it to the list.

76 thoughts on “Self-Uniting Marriage Can Save Brides Money”