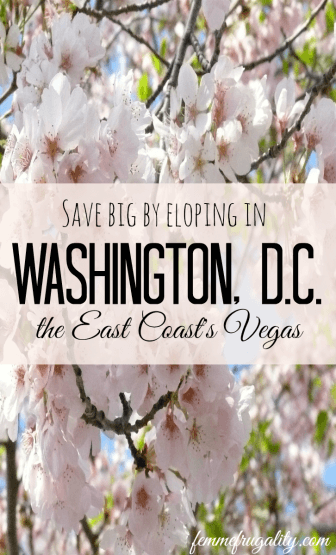 When you think of eloping, odds are your brain will conjure up images of an Elvis impersonator in a white chapel surrounded by casinos and desert. In other words, you’re picturing Las Vegas.

Getting married in Vegas is easy. But for those of us on the East coast, it’s quite a haul, and we do have other options much closer to us.

There are quite a few reasons our nation’s capital is the perfect place to say, “I do,” without blowing your budget. Here are a few of them:

The turnaround is quick on marriage licenses.

As long as you bring all the necessary paperwork, documentation and money to pay appropriate fees, you can get your marriage license the same day you apply. Let’s say you left Pittsburgh at eight in the morning. You’d get to Washington, DC sometime between noon and 1P, fill out and submit your paperwork, and have a proper license potentially before 2P. Depending on the type of marriage you opt for, you could be legally bound minutes later.

Essentially, a self-uniting marriage is one where you don’t have an officiant. That means that not only do you not have to pay clergy fees, but you can also literally marry yourself, taking whatever vows to whatever God (or no god) that you prefer.

Want to learn more? Check out the US states that allow self-uniting marriages.

While many states that allow self-uniting marriage require the participation and signatures of witnesses, DC has no such mandate. It can literally be just the two of you. You can get your license, sign it and be done in minutes. (Just be sure to check the ‘Self’ box on your application.)

It makes for beautiful wedding photos.

Even if you’re eloping at the last second and don’t have a fancy white dress or tux, you’re likely still going to want photos to remember your big day. There’s only one spot in the courthouse where you’re allowed to take them (and I hear it’s not that great of a backdrop,) but luckily, there are a myriad of places in the district that present memorable scenery. Think national monuments and the various parks and green spaces.

Also, you don’t HAVE to get married in the courthouse. You can take your self-uniting license and get married wherever, or meet your officiant at the location of your choice.

DC is a pretty central location for almost all the states on the East coast. While it’s true that it’s a further drive from Bangor than it is from Philly, it’s still a lot more doable of a drive than heading across the country.

Because today more people are eloping for time and convenience’s sake rather than to escape the family, it also means that your guest list won’t be as limited by airfare if you do indeed want other people there. Just arrange a carpool!

Still want to get married by a fake Elvis in polyester? More power to you! Just be sure to save while you’re in the city of sin.

This post idea was submitted by a Femme Frugality reader. Have a topic you want to see on the blog? Share in the comments below!

4 thoughts on “Eloping in DC: the East Coast’s Vegas”