Over two years ago, I wrote an article about self-uniting marriage. Saving on clergy fees? What kind of frugal bride wouldn’t be interested?

The response to it has been huge, and has inspired many readers to successfully petition against their county clerks to get married without an officiant based on our Constitutional right to freedom of religion.

A couple of months ago, I started talking to a reader in California who wanted to get a “non-clergy” marriage in their state. (“Non-clergy” is the same thing as self-uniting—just different choice of words.) We bounced ideas off of each other, and the couple did the hard work that led to successfully obtaining the type of marriage license they wanted so they could dedicate themselves to each other in the way that best celebrated their understanding of God (or lack thereof) and Love.

As far we know, this is the first instance of a successful secular, non-clergy marriage in the state of California. The reader has been kind enough to share their experiences with us today. All involved hope that this story paves the way for other couples. 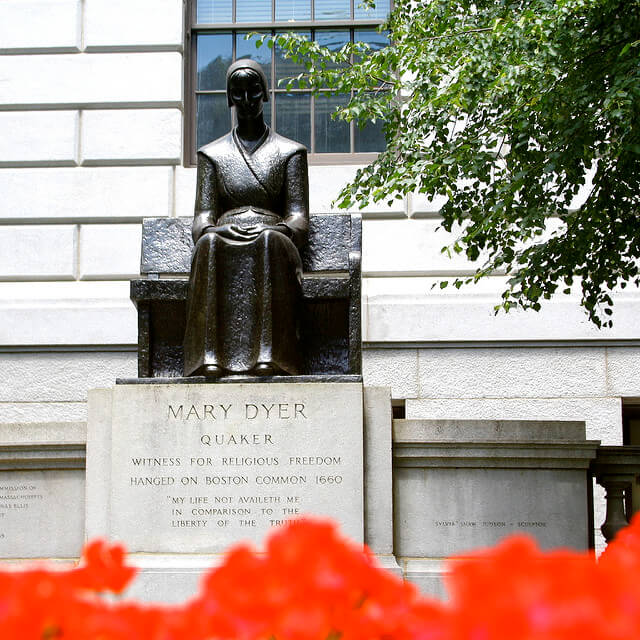 Photo via Thunderchild7 under CC by 2.0

By way of background, the Pilgrims had scarcely arrived and established their fundamentalist, theocratic colony when they started persecuting anyone who didn’t worship the same God in the same way. The first people hanged for heresy in Massachusetts were Quakers. There’s a statue of one of them, Mary Dyer, in in front of the State House facing Boston Common.

But over the years, Quakers and their quirks — including not having clergy — have come to be accepted as “respectably” religious.

“Most states make some kind of special allowance for legalizing a Quaker wedding when there is no pastor to ‘officiate,'” according to the Friends General Conference, the main network of clergy-less Quakers in the USA.

Since the Constitution prohibits disparate treatment for different religions, or for religious and non-religious beliefs, that should mean that it is possible for any couple in any of these states to marry without clergy, as Quakers do.

Easier said than done, as I found out in California.

In the District of Columbia and Colorado, any couple can elect to “officiate” their own marriage, without being asked about their religion.

In other states, the procedures for “Quaker marriage” vary. You will either need to read the law, or ask Quakers in your state. Don’t expect local officials to have a clue, especially in areas with few Quakers.

Even if you aren’t a Quaker, you could start by contacting a local meeting of the “Society of Friends” (Quakers).  Ask nicely, and they will probably be happy to help. Explain that you aren’t a Quaker, but want to marry without an officiant, as Quakers do, and ask them how Quakers register their marriages in your state. Is there a special form or procedure?

Get to Know the Law and Get Some Help

Once you find out the procedure Quakers use in your state, your next task is to get local officials to allow you to follow that procedure, even though you aren’t a Quaker. In some states, such as Pennsylvania, there have already been lawsuits over this. In other states, you may be the first person to ask. Start by asking nicely.

You might have to get a lawyer involved. But don’t assume that local officials will be hostile. They may just not understand: many people can’t imagine why anyone wouldn’t want to pay some stranger to “officiate” over your own wedding.

Being the first in your state, county or city will take more work, may take more time and might require you to face publicity and/or postpone your wedding. But it will set a precedent that will help the next couple.

If local officials refuse to let you follow the same procedure as is followed by Quakers, you could ask civil rights groups that have been involved in this and similar issues, such as the Freedom From Religion Foundation, the Americans United for Separation of Church and State, or the ACLU chapter in your state.

Femme’s note: It took about a month to hear back from them, but a reader in Pennsylvania who ran into problems with her county clerk managed to get a self-uniting marriage license in Berks County with the help of the ACLU.

We asked all three. For each, we filled out a form on their website, and an intake lawyer called us back 1-2 weeks later to get more information. All these groups get more worthy people asking for help than they can handle, so don’t be surprised if they decide not to take your case. Specialized groups such as FFRF and AU may be more likely to take on a case like this than a group with a wider focus like the ACLU.

In our case, AU offered to have one of their staff lawyers write a letter to the county clerk explaining why we should be allowed to have a “non-clergy wedding” (the term used in California law, Family Code section 307) if we state that our “religious denomination” is “atheist”.

Want to see the language included in this letter? Download it here.

That letter persuaded the San Francisco City and County Clerk to allow us to have a “non-clergy marriage” with 2 witnesses and no officiant, which is what Quakers do in California.  If you are in another county in California, and the clerk balks at allowing an atheist “non-clergy wedding,” see if AU will send a similar letter to your County Clerk.

We had a second round of even more arcane argument, however, because we wanted our marriage to be “confidential” rather than “public”.  California is unusual (maybe unique among the states) in having two different ways that marriages can be recorded: public or confidential.

A public marriage is just that: Anyone can buy a CD for $10 with all the public marriages in
California for a given year, including parents’ birth names, dates and places of birth, etc. Who would want their mother’s maiden name and other information invaluable to identity thieves in such a public database?

A confidential California marriage is like a sealed court record: it is kept in the county clerk’s office and available only to the married couple. You can get a certified copy you can show to anyone who needs to see it, e.g. to show eligibility for health insurance as a spouse. Anyone else needs a court order to get a copy of a confidential marriage record.

So in California there are two ways to “solemnize” a marriage (by an officiant or “non-clergy”) and two ways to record a marriage (public or confidential.) That makes four possible combinations.

But the state of California, in its infinite wisdom, has prepared only three marriage license forms. Apparently they developed the forms for confidential marriage and non-clergy marriage separately, and never thought about the possibility of someone who wanted non-clergy solemnization and confidential recording. We were being foiled by poor forms design! 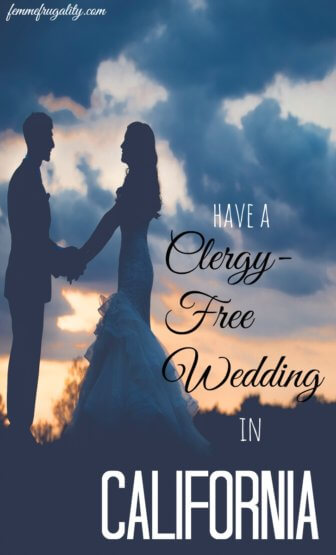 Everyone we talked to agreed that the law allows this, but they kept saying “no” because they couldn’t figure out which forms to use. We were treated politely and pleasantly throughout. I’m not sure how it would have gone in other California counties.

For what it’s worth, the San Francisco County Clerk, San Francisco City and County Attorney, County Clerks elsewhere in the state they consulted, and the state vital records office all said they had never heard of anyone asking for an atheist non-clergy marriage or a confidential non-clergy marriage. But they all agreed that the law is unconstitutional as written, so that some accommodation needs to be made. They also agreed that the state and local websites need to explain these options better – many counties don’t mention the non-clergy option, or don’t explain it properly– and that the forms and maybe the law itself needs to be clarified.

Success! And how you can get a non-clergy marriage in California, too.

After a month of negotiation, and less than two hours before our appointment at City Hall with an officiant we didn’t want and didn’t want to pay for, state and county officials finally worked out a way to use the existing forms for non-clergy, confidential, atheist marriage.

If you have trouble with this in another California county, tell them there is a procedure that has been used for this in San Francisco. They could check with either the San Francisco County Clerk’s office or, perhaps better, the office in Sacramento that was involved.

Interested in a personal contact? Shoot Femme an email if you’re facing this problem as a Californian and she’ll get you connected to the appropriate people.

In the end, everything went smoothly. We filled out the application form at the County Clerk’s office at City Hall, and were given a non-clergy marriage license. We filled that out with our two witnesses — at a time and place of our convenience — and brought it back to the clerk’s office. (We could have filed it on the spot if we had brought our two witnesses with us to City Hall.)

We entered “atheist” in the box for religious denomination. Nobody could dispute that atheists don’t have clergy!

It took a day for our marriage to be recorded. The day after we turned in the signed form, we came back and paid for a couple of certified copies of the marriage certificate: one to keep at home and use for all the paperwork for changing our status with insurers, etc., and one to put in our safe deposit box. These copies were provided on the spot.

The First Atheist Marriage in California

We went through a lot of hassle, but hopefully it will now be easier for others in San Francisco and maybe elsewhere in California.

Congratulations to our couple on their marriage! So much thanks for sharing their story, and for fighting the good fight to pave the way for others who want to get married in accordance with their theistic OR nontheistic beliefs.