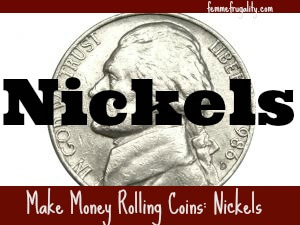 So far in this series we’ve covered mint marks and pennies.  Rare nickels are a bit harder to identify than pennies, but can be well worth the effort.

Older nickels will be easy to identify.  They won’t have Jefferson’s face on them.  They’re called Buffalo or Indian Head Nickels because those are the pictures on them.  If you’ve got one, you’ve made a nice find.  They are worth far more than face value, ranging from $2 to hundreds of thousands.  I would reference the About guide before you traded it in (I’ve found them to be pretty accurate.)

So that’s easy.  If you have a Native American or buffalo on your nickel set it aside.  But what do you look for with Jefferson nickels (which it’s more likely you have?)

During World War II, nickels were made with a silver alloy.  They’re actually 35% silver.  Most of them are worth a little less than $2 (which is still a huge improvement from 5 cents,) but if you have one from 1943 with a Philadelphia mint mark, check the side with Monticello.  If the back is blurry or looks like it’s been printed on twice, you have a double die, and that nickel is now worth around $30.  The years on these are 1942 through 1945.  (Though 1942 with a Denver mint mark isn’t made with the silver alloy, it’s still worth around $.75.)

There were a few years where the mints made mistakes.  One mint mark was printed over another, for example, in 1949 there are some nickels with a Denver mint mark (“D”) printed overtop the “S” mint mark.  Circulated, this is worth around $20.  The same thing  happened again in 1955, only those are only worth $5.  In 1954, they printed the S over the D, and that one’s also worth around $5.

Other Nickels Worth More than Five Cents