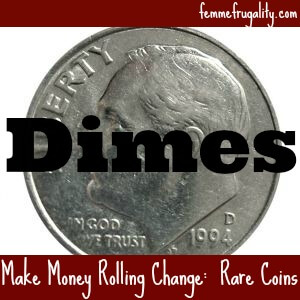 I’ve had almost as much luck trading my dimes in for a decent return as I have pennies.  There are so many different ways you may run across a rare dime when you’re rolling your change, so keep a careful eye out for these!

Save Coins With Obvious Differences

Normally, US dimes have a picture of FDR on the front.  If your coin does not have FDR on the front, save it.  Or sell it.  Or whatever you want to do with it.  Just don’t roll it up and give it back to the bank.  Because it’s worth more than ten cents.  The figureheads are largely non-descript.  One is lady liberty sitting (aptly called a Seated Liberty dime,) but there is also the bust, capped bust, and barber series.  All of them pre-date 1916.  And if there’s anything I’ve learned throughout this whole process, it’s that at some point, age starts increasing face value by leaps and bounds.

Mercury dimes are a great find, and a bit less rare than the older coins.  They were minted 1916-1965.  They range in value from $2.70 (which is a big step up from ten cents) all the way into the thousands.  I could list all the prices here, but I think it would be better for you to just check out the About guide (which is my trusty source for approximations on how much I can expect to sell my change for.)  If you find one, hold onto it.

Between 1946 and 1965, Roosevelt appeared on dimes made of silver.  Because of that, if you come across one today you can sell it…as silver.  At the time I’m writing this the price of bullion silver is $19.26/ounce.  A silver dime weighs about 2.5 grams.  So at this point in time each one is worth about $1.70.  If you find one, you may want to hang onto it.  Silver prices are pretty low right now.

It’s very unlikely that you will find a proof while you are rolling coins.  (Though the guy who’s about to show you what they look like in this video finds them often enough.  Not always in great condition, but still.)  They are generally purchased direct from the mint by a collector, or at least someone who has enough sense not to sell them.  They are on a shinier field and FDR’s head appears a little darker in the light.  The rim along the outside is usually thicker, too.  But when you touch them with your bare hands, the oil from your hands can wear off that shininess.   A lot.  Which in turn makes your proof look like everybody else’s circulated coins.  Value goes down.  Dramatically.  Especially if you have a proof without a mint mark.

When you’re rolling your dimes, just keep an eye out for a few things:  coins that have anyone other than FDR on them, any Roosevelt dimes prior to 1965, anything crazy shiny (proofs), and 1982 along with 1970, 1983 and 1996.  When you’re done rolling you can examine them to see if you have anything worthwhile. (If you have a question, I’d recommend taking it to some type of coin specialist that you trust for an honest quote.  If you’ve got nothing, they’ll tell you.)