A few weeks ago I moved into my new place. I’m doing it slowly, which means it’s been low-stress, but I’ve also had a few moments of, “Crap, why do I not have anything in my house that I need?”

Well, that is until this past weekend. I was super lucky in that I moved into the neighborhood a few weeks before the neighborhood garage sale. I was determined to only buy the things we needed, and the kids could get one toy/bauble each. That didn’t exactly work out the way I planned, but we got some cool stuff and met our budget without going over. 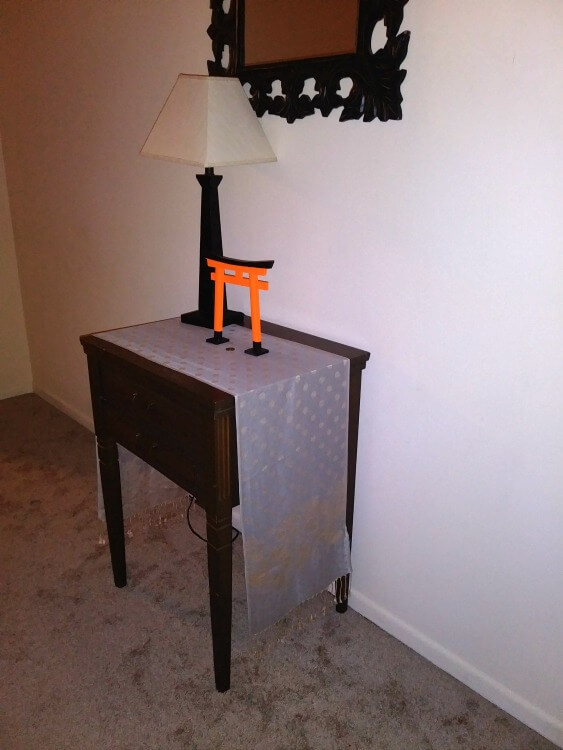 I needed to set some lamps up, which is why tables were so important. This one is actually a sewing machine table that I found at the first house we went to for $10. I may get ambitious and bust out the sandpaper to stain it black like the rest of this furniture by the end of summer. But I might not. It would be cool to have them all match, but I’m trying to spend my limited free time doing things I actually enjoy, and inhaling stain fumes isn’t necessarily one of them. 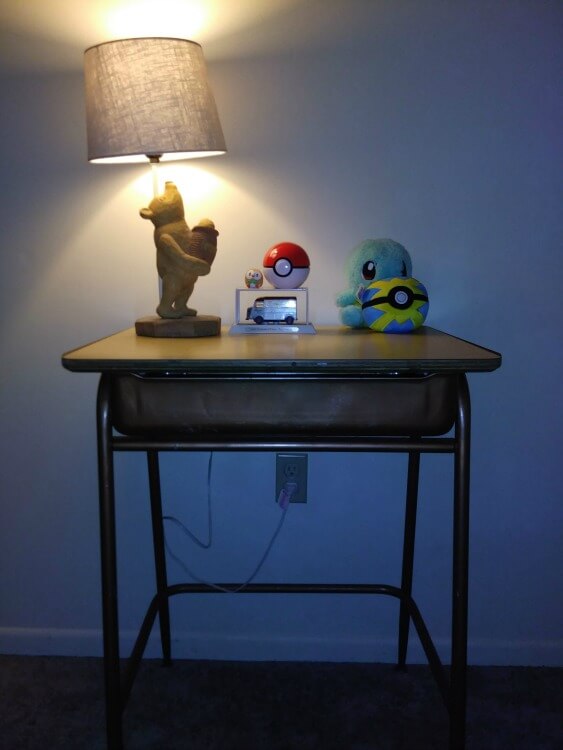 Another lamp situation! For this one I got an old school desk from the same lady for $5. Right now we’re not storing anything inside because little fingers. But it is working really well for giving that lamp a home–and some of the child’s display items. We actually got that truck thing (they know way more about it than I do) at the garage sale for $5. With a mint condition box and all. 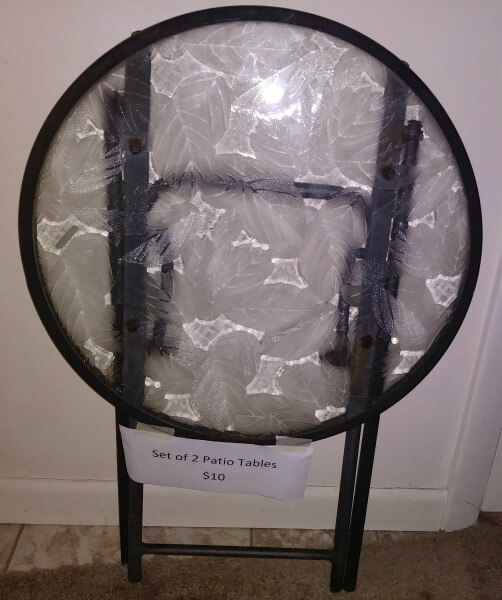 I picked two of these up for $5/each. I already have a chair out on the patio, but now I’ll have somewhere to set drinks or food when entertaining. Or my mouse pad when I’m working outside.

This one was $10, and is going in my room–which I don’t completely have figured out yet. I know I’m going to need a nightstand, and this one is just super cool. The two outer circles swivel, so they can curl up for a compact table or spread out at various angles to accommodate all your stuff.

Stuff like this globe I got for $2. That’s for both me and the kids. They like seeing where I travel, and I like encouraging them to learn more about the world outside our own borders. 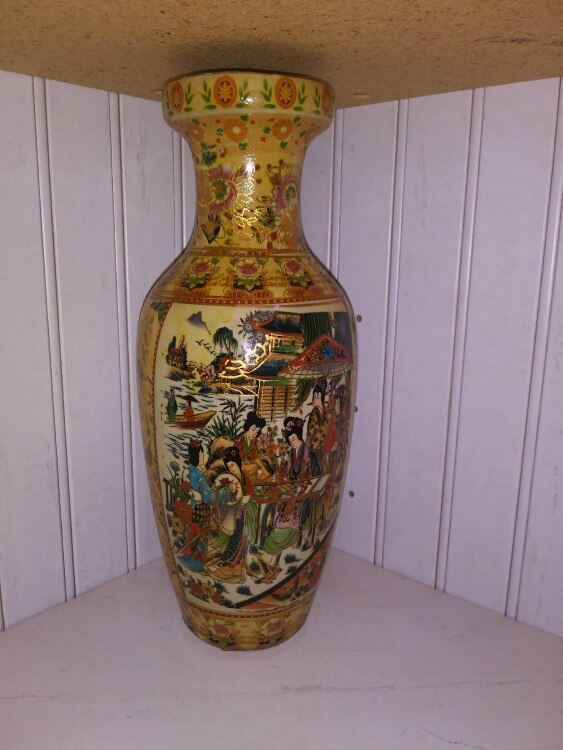 I was at this one house and they had a bunch of vases from India, where the couple was from. They were gorgeous. I got caught looking, and asked how much. Five dollars.

Too much for an indulgent purchase. As I was walking away, I got an offer for $3.

It’s beautiful, so I coughed up the money. He told me it’s supposed to be a Chinese scene. He may have even gotten more specific, but I unfortunately don’t remember.

All About that Cello 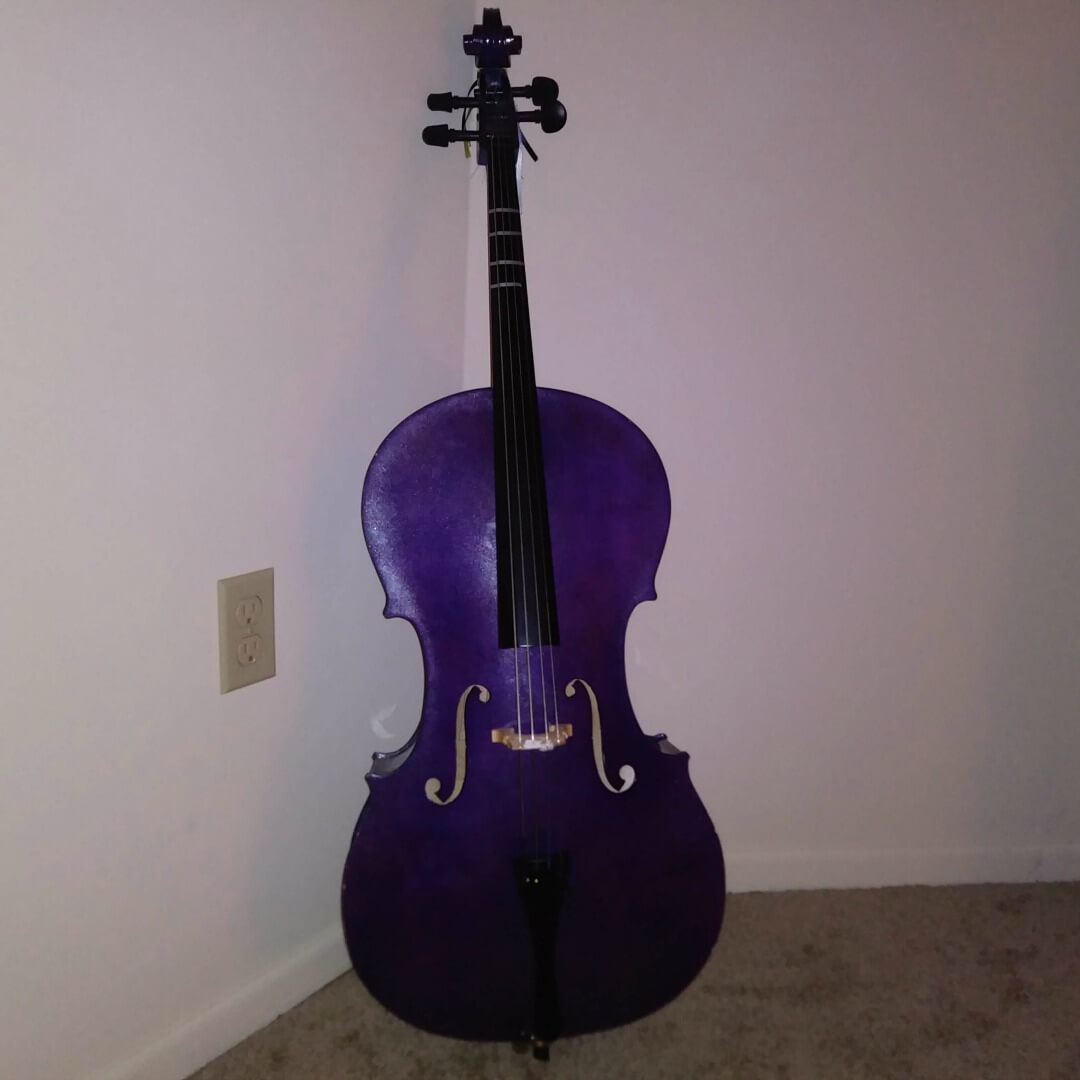 My one kiddo couldn’t stop playing with this child-sized cello every time we walked by it. The second time, I found out it was only $5. The third time, I decided to buy it. It came with a bag, looks to be in functional shape, and supposedly orchestra lessons are offered next year in school. Now I just need to find out how expensive a bow would be…

We literally came in right on budget–sixty dollars. Five hundred points to us!

This is a really great time of year to hit up neighborhood garage sales. You can find them online, or even just keep an eye out for signs as you’re driving around. To get the best stuff, you’ll want to wake up pretty early. Most start at seven or eight, but my sibling has turned up even earlier than that before to catch people as they’re setting up.

Before you go to the store for that one thing you truly need in your home, be sure to pick through you’re neighbor’s stuff first.