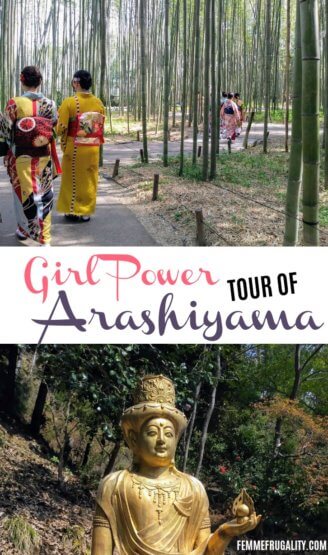 Believe it or not, while I was in Japan my friend who I was visiting had to work! We took the opportunity to spend some time in Kyoto. I’d have a hard time deciding on a favorite place I visited while in Japan, but I could definitely see myself living in that city. Even within the city streets, I found my soul once again moved by the immense beauty that can be found across the Pacific Ocean.

One neighborhood we knew we wanted to hit while we were there was Arashiyama. This is where you’ll find the famed bamboo forest among a million other cultural delights. I planned this part of the trip pretty strategically as I wanted to optimize our time without feeling rushed. As I did so, I also unintentionally planned a very girl power tour of Arashiyama–which ended up being a very cool thing. 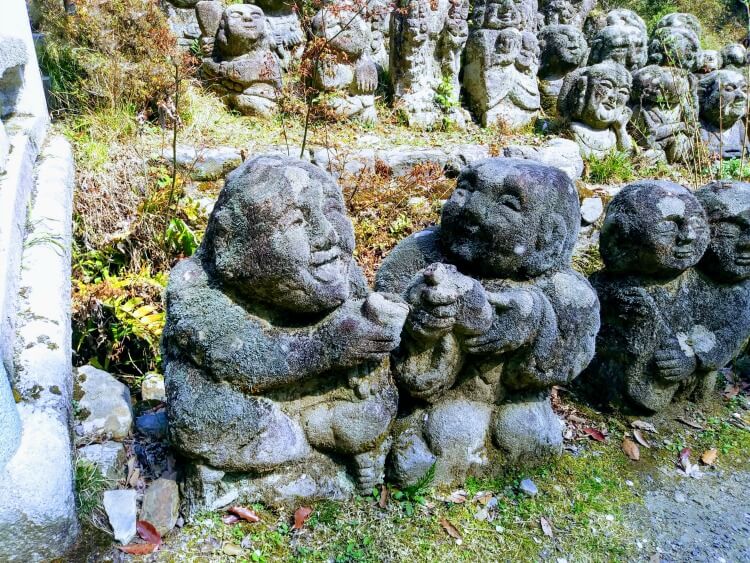 The first thing we did on Arashiyama day was hop onto a train crowded with tourists from central Kyoto to Arashiyama. The ride was pretty quick–only a few stops–but hot and claustrophobic.

Luckily, when we got off the train we were headed somewhere a little off the beaten path: Otagi Nenbutsu-ji Temple. To get there, we took a cab for the sake of time. It was part way up a mountain, and from there, we’d be walking downhill (almost) all day as the sites got progressively more crowded.

But I think we were the first visitors of the day at this temple, and only a few couples came in after us. It was quiet and serene and peaceful.

Oh, and littered with a ton of Buddha statues. Twelve hundred of them to be exact.

These statues were made by lay worshipers under the instruction of an artisan in the 80s, and are meant to demonstrate the many expressions of Buddha–or disciples of Buddha. It depends on which literature you read, and I probably should have asked which it was while i was there. Many of them are serious and spiritual, but then there are fun-loving ones, too.

But those statues aren’t the reason Otagi Nenbutsu-ji makes the Girl Power list. First, the temple was founded by a woman: Empress Shotoku. Built in the eighth century, its been destroyed, rebuilt and relocated several times since its inaugural opening.

On top of having a female-led history, the temple itself is dedicated to two important bodhisittvas: the goddess of mercy and the goddess of space. There are beautiful statues of these bodhisittvas both inside and out, but you’re not supposed to take pictures inside of Buddhist temples.

Admission here was less than $3 each. 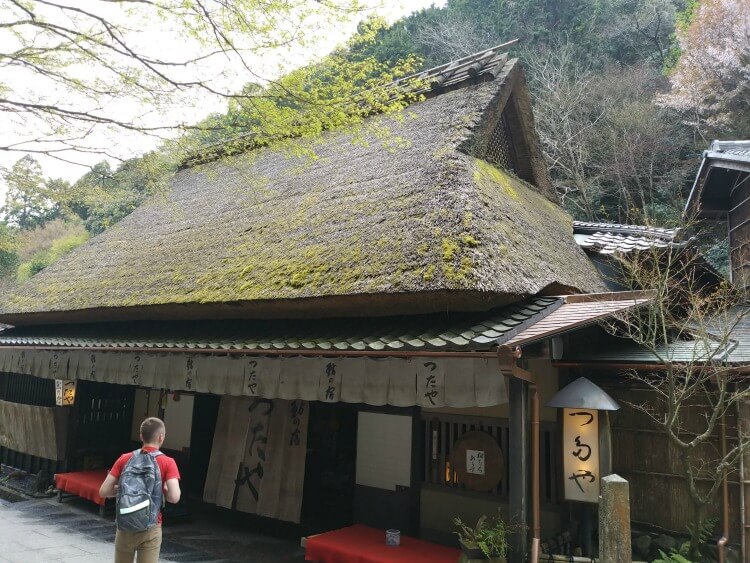 When you’re done at Otagi Nenbutsu-ji, you’ll turn right on the road closest to the temple–the one lined by trees on the right side.

About two to five minutes down the road you’ll see a big, orange tori gate leading to a stone road on which I saw no cars. This is Tori Motto, and it is an ancient and historically preserved street.

The architecture itself is beautiful, with thatched roofs covered with moss. But as you walk the road, you’ll be greeted by various shops and restuarants. We didn’t eat here, but I did do some shopping. Which, if you know me, is a little out of character.

But I was enchanted by the fans and origami. Blown away by the skill that went into making hand bags and jewelry. This is where I was going to buy traditional Japanese chatchkis to bring home to my kids. And a new purse. Because mine had not-so-conveniently broken on the the walk from Otagi Nenbutsu-ji to the Tori Motto.

All but one of the shops I went into was owned by Japanese women. 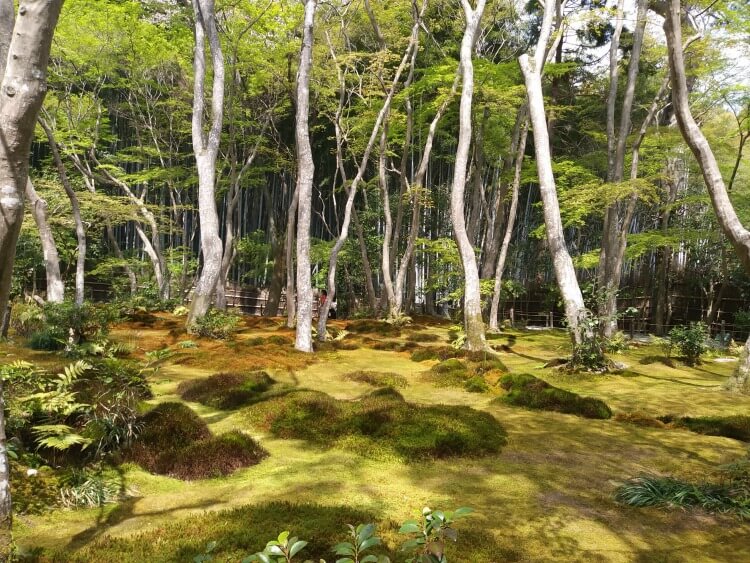 But it had been very dry in the region to this point in our visit, and without rain the gardens looked a little, well, brownish yellow. With a little bit of green. It sounds super ungrateful to say something like that, but really what I think happened is that I made it so beautiful in my head that there was no way reality could keep pace.

It did rain a couple days later, and I’m sure the gardens turned lush and green at that point.

But this temple did not disappoint. While the gardens weren’t quite what I expected, the actual structure was a great experience. It’s humble in size, but inside you’ll find statues of four women, which I assumed were meant to pay tribute to the women who founded this site.

The primary leader, Gio, was a dancer who fell hard for a powerful chieftain in the country’s capital. He fell hard for her, too–until he didn’t. When he abandoned her, she decided to dedicate her life to Buddha, establishing Gio-ji.

She lived the rest of her life as a priestess, as did her mom and sister who came along with her. Someone else that came with her? Another one of that cheiftan’s ex-lovers!

But going in to pray in front of those four figures was something special. A reminder that strength and virtue don’t come from the value men see in us.

Admission here was less than $5 each.

Okay, so technically, Tenryu-ji was founded by a male shogun in the 1300s. However, on this same site in the ninth century, Empress Tachibana no Kachiko founded Japan’s very first Zen Buddhist temple: Danrin-ji. Thus, it definitely counts for our girl power tour.

This is probably the biggest tourist attraction in Arashiyama, so it was very crowded. We weren’t really sure how much inner peace we were going to find inside at that particular moment, and wanted to save 500 yen each, so we opted to just do the gardens.

There is nothing “just” about the gardens at Tenryu-ji–especially at peak cherry blossom season. They’re beautifully manicured–simultaneously delicate and robust. Every corner we turned was breathtaking, whether we were walking alongside the temple or up a path in the adjacent mountain.

I’m sure the temple is amazing; there must be a reason it was so crowded. But definitely, definitely don’t miss the gardens.

Admission here cost us a little less than $5 each just for the garden. It would have doubled if we had chosen to go into the temple, too. 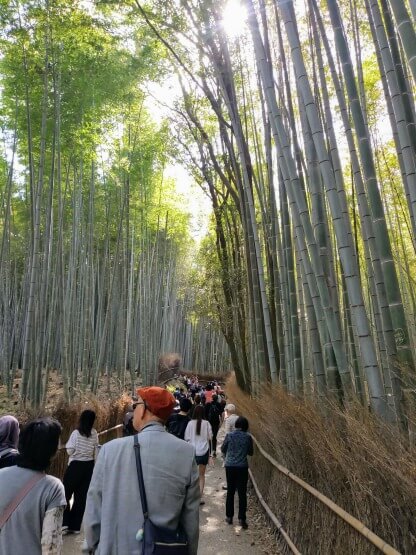 Throughout Arashiyama we found ourselves surrounded by bamboo, but the main alley that you see all the pictures of is right outside the gardens of Tenryu-ji. It’s amazing and magical, but also super crowded. The path is shorter than we thought it would be, but it’s definitely still worth a walk through. Especially since it’s free. Just make sure your expectations are matched with its actual length and the amount of fellow tourists you’ll encounter.

We cut through it on our way to our final destination of the day, which had nothing to do with girl power and deserves a post unto itself.

Stay tuned for next Friday…

7 thoughts on “A Girl Power Tour of Arashiyama”