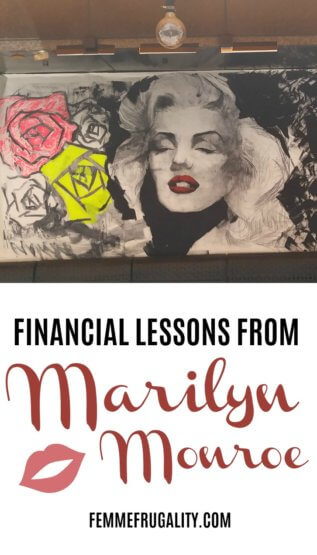 Or should I more properly state, “…from The Secret Life of Marilyn Monroe,” which is a biography by J. Randy Taraborelli.  The bok was a great, anything-but-dry reconstruction of a life that both confirmed some of my assumptions and opened my eyes to realities that fly in the face of decades of gossip.

Monroe lived a sad life, but in all honesty, after reading this book, if I had met her in real life I would undoubtedly feel bad for her and want to help her, but I’d also probably be annoyed and find the woman a bit melodramatic. She had a hard childhood, but she made it sound oh-so-much worse for publicity’s sake.

Her ultimate demise was the pharmaceutical drug culture endorsed and encouraged by her industry at the time, which is a sad, shameful thing. Then again, it would appear that when she was at her best she was such a joy to be around–such a duplicitous character.

But isn’t that the case for all of humanity? We all hold within us light and dark.

Anyways, as I was reading I ran across a ton of financial lessons: some good and some bad. Any quotes I use are from Taraborelli’s work.

Don’t Let Any Man Hold You Back

From a young age, the men in Monroe’s life tried to keep her down. Or, more appropriately, tried to turn her into their ideal of what a woman should be: a home-making, doting wife that had no concerns outside of her marriage and family.

That wasn’t unusual for the time, but Marilyn wanted more. From a very young age she had a very specific goal of becoming a star. She chose her career over her marriages with Jim Dougherty and Joe DiMaggio, and while she may have never achieved ultimate happiness, she certainly achieved her goal.

If You’re Worth More, Demand More

Marilyn struggled with her relationship with her contractual overlord–Fox–for much of her career. After being cast for a film where she would play yet another dumb blonde (which frustrated her as she wanted to break out and take on more serious roles,) she found out she was being grossly underpaid compared to her peers.

You know what? Her attitude worked. She didn’t have to do the movie she was disgruntled with, and when she resigned she got a $100,000 bonus.

Later on in her career she would establish her own production company to further her point and use as leverage to get paid more money. She was never paid commensurate to what she was worth, but she sure knew how to prove her point.

Show Up for Work

Monroe was constantly late to work. It frustrated the bejeezus out of her coworkers. Towards the end of her life it started getting so bad that a lot of times she wouldn’t even show up, citing one illness or another.

Granted, she was addicted to the meds her doctors were prescribing her and may have inherited a mental illness that hadn’t manifested itself in full-force until later in her short life, but her tardiness and constant absence eventually got her fired.

Lesson learned: show up to work.  So you can keep your job.

Your Home Doesn’t Have to be Lavish

Marilyn Monroe spent a good part of her childhood in a foster home that she cited as an adult was quite horrible, but in all reality was very loving. It was, however, modest.

Yet when she became a star, she didn’t go out and buy a mansion. In fact, her home as a grown woman was actually smaller than the one she spent her younger years in. Only a few rooms large, she loved it because it was her own and enjoyed entertaining there with no hint of shame. Had she managed the rest of her finances properly, she would be a personal finance role model.

Know Where Your Money’s Going

Towards the end of her life, her accountant advised Monroe to stop spending so lavishly. He had no idea where she was spending her money, and apparently neither did she. She only had $13,000 to her name.

Considering what she was making, that sure wasn’t a lot. It impacted those she left after she died. While she intended to leave $5,000/month to her mentally-ill mother for her hospitalization and care, her mother had to be removed from the high-class facility she was being treated at during her daughter’s life because the money simply wasn’t there.

Leave Your Estate to Someone

When Marilyn Monroe died, she was broke. The money she left to her family had already been spent.

But then, years later, something happened. All the work she did during her lifetime starting earning her money, and it all went to her estate. She had left part of it to her psychiatrist, and a larger portion to his acting coach.

It seems like an odd choice, but apparently it was a good one. When the money did start rolling in, her wishes regarding her family were fulfilled. And the owner of the estate (her coach’s widow) works hard to uphold her image and has the deepest respect for her. It would have been such a shame to just let that money go into anyone-who-could-grab-it’s hands.

What have you been reading lately?  Check out more recommendations on the Around the World in 80 Books Challenge.