Today, Revanche of A Gai Shan Life  joins us for our weekly Friday series on women’s money issues in honor of Women’s Money Week, which will take place January 1-7, 2017. Revanche covers the xenophobia and racism she has encountered in her lifetime as it pertains to her finances as an Asian-American woman.

Please use the hashtag #WMWeek17 when sharing this story. 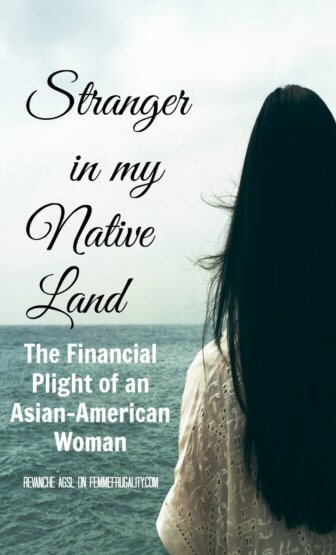 Stranger in a Strange Land: My Native Country

As a first generation American, I see my home country through different eyes than most. Not because I don’t consider myself American. Of course I am, as much as anyone who isn’t a First Nation native can be – I was born here, a natural citizen.

But I have dark eyes, dark hair, dark skin and no nose bridge to speak of, so the correct answer to “where are you from?” can be Japan, The Philippines, China, Cambodia–anywhere but here. California, or Los Angeles, are unacceptable answers. I can’t be from here. I’m not white.

Why does this matter? In some cases, it makes no difference. What harm do I suffer if the cabbie wonders if I’m from that one country he visited, or the other country whose cuisine he likes?

In most other cases, however, it matters a great deal, indeed.

The Financial Costs of Being a Target

It matters when you’re a target to profit from, based on your race. I saw this play out most immediately with Mom and had to get involved at a very early age. Her accent meant that vendors would dismiss her, disregard their own policies, overcharge, and fail to deliver. She had an accent and that made her stupid and unimportant, they decided.

Angry and frustrated sitting beside her listening in to one such conversation, I got on the phone, all of 9 years old but speaking in English unaccented, demanding that they honor the agreed-upon terms. Magically their inability to do so melted away. From then on, I made the phone calls, whether to renegotiate contracts, dispute billing errors or just to get simple information.

Being an Asian-American Woman in the Workplace

It matters when you hear and understand anti-immigrant rhetoric–when you realize that white or European immigrants are now acceptable, but the people who look like me or my friends are “immigrants taking the good jobs.” No matter that I’ve been a star in the workplace since I was 17; to those people, my race and my skin color define me, not my professionalism, work ethic or performance.

As Taylor pointed out, it’s tough enough to make it in the workplace as a woman with the wage gap. As a woman of color, racial stereotypes further impacts your ability to earn a living. So it matters a great deal when employers and colleagues consider you a “minority quota hire” on sight.

It matters when your first manager has a (well-known, internally) obsession with Asian women so his hires were dismissed as objects of his obsession. Work performance made no difference; they couldn’t earn raises or promotions because they were hired based on their appearance–nothing more–so far as the management was concerned.

A Long Way to Go to Eradicate Racism, Xenophobia and Prejudice

Twenty years later, the racism we face is still astonishing. Not more than a year ago, we were calling a mechanic’s shop regarding services and the shop owner declared he wouldn’t help people with accents. We don’t have accents, but he was suspicious and wanted to be sure, you see, that he wouldn’t have to deal with a lesser form of American. “Those people”, he calls them.

My white friends rallied to the cause, of course, offering to call him with their Canadian, British, Australian, and Scottish accents.

My perceived youth, completely normal for an Asian, still comes up when my performance is evaluated, more than my results. I still have to jump through more hoops than any other manager to ensure that I’m being taken seriously as a professional because my years aren’t worn on my face.

I am always mindful of the active racism that lingers in many fellow citizens when I look out for our money. I always get a second and third quote for services.

I’m not bitter about my particular journey, but I am frustrated that this is all old hat. I’m frustrated that my child will also be held up to a standard that takes into consideration zir racial appearance first, zir skills and results second–or last.

Despite all the barriers I’ve faced, the level of racism that I encounter on a daily basis is mild. Asians are the “model minority” so we don’t come in for the same degree of hate that other non-white minorities experience. We’re dismissed, demeaned, underestimated. But we’re considered harmless in the end. If you’re Hispanic or black, you always have to appear calm and collected, otherwise you’re a harridan or an angry Black woman.

I don’t have to imagine what it’s like to be them, I hear their stories and, to this day, I can only shake my head when people declare that we’re post-racism. The recent election, and the surge in hate for Jews and minorities since, clearly points up the fact that many Americans are in favor of racism.

Racism isn’t limited to the white residents of this country, of course, I’ve witnessed racism between non-white races, towards one another, and that also contributes to the wider harms done to our fellow citizens.

Xenophobia and racism are complex issues in this country and it’s critical to know that they are both present in the structure of this country.

It’s critical to know that people who object to hiring for diversity, stating they shouldn’t have to “lower standards,” are telling us what they believe: only a heterosexual white male can meet standards because that is the standard. Not skills, not experience, but race and sex. Anyone else, therefore, is naturally lowering the standard.

It’s critical to know that minority, women, disabled, LGBTQIA, any otherwise not standard issue white male candidates do indeed have the necessary talents and skills necessary to do the job. It’s our job to remove artificial barriers to finding them when you recruit new hires.

It’s critical to know that we have to actively dismantle our biases that point to hiring the people who look the same or fit the same “culture”, that manages to consistently avoid admitting minorities beyond the token woman, or token Asian, or token Black man, that consistently builds and maintains racist structures in which managers can refer to their colleagues as racial slurs.

These are complex issues. I can hardly do them justice here, but they’re worthwhile to tackle.

This country was built on the bones of Natives, with the blood of immigrants, and we must grow beyond what and where we are.

We have to start somewhere. We can’t avoid it simply because we aren’t able to solve it overnight.

6 thoughts on “Stranger in My Native Land: Asian American Money”