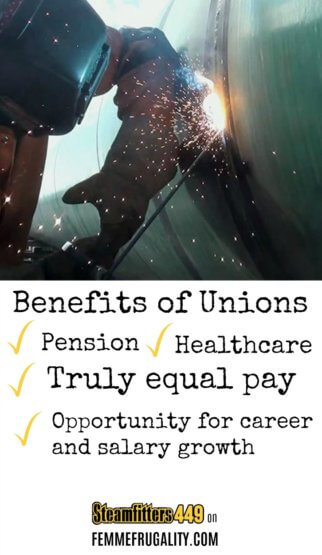 I’m a huge proponent of education. Sometimes that means college.

We need to remember that one is not superior to the other. In fact, if you’re measuring ROI over the course of your career, there’s a decent argument for trade school being the smarter decision.

Career Training Without the Student Loans via Steamfitters Local 449

Steamfitters Local 449 is a union here in the Pittsburgh region representing those who make, install and service piping systems. This includes occupations such as welders and your HVAC-R service person.

How do you learn these skills?

Steamfitters Local 449 works with the United Association and the Mechanical Contractors Association to provide this free education at its training center in Harmony, PA.

After that union members pay a marginal amount into the apprenticeship fund for each hour they work, which continues the cycle of free education.

This frees you to use the money you’re bringing in while you’re training to do things like live in safe housing, afford groceries and plan for your financial future–things that are much harder to do if you’re spending your younger working years burdened by student loans.

Getting Paid to Learn

The first step in the training process will be uncompensated. But if you can make it through that initial training, the rewards are worth it.

If you complete this step successfully, you’ll be taken on as an apprentice. Apprentices currently start at $18.25/hour plus health benefits. If you make it through that first, probationary year, you’ll be eligible for a pay bump of  10% and gain access to Steamfitters’ retirement vehicles.

Keep doing well and you’ll continue to earn those 10% pay bumps each year throughout your five-year apprenticeship.

When you’ve completed your apprenticeship, you’ll start earning journeyman’s pay. That’s currently $41/hour or $82,000/year if you work fifty 40-hour work weeks. Nick Kappas, Director of Marketing at Steamfitters Local 449, notes that after you add in benefits like health insurance and access to retirement vehicles, the effective hourly pay jumps to about $65/hour.

Either way, that’s enough to live a solidly middle-class lifestyle in the Pittsburgh region. And you won’t have to worry about your first ten years of pay going to service student loan debt.

Each of these positions include a pay bump up from the journeyman status, allow you to bring in an even higher income.

How the heck does a pension work?

A major benefit to union positions is access to a pension. Pensions are defined benefit plans, which means you’ll easily be able to figure out how much money you’ll be pulling in once you’re retired.

For example, Kappas says that a journeyman currently working 40 hours a week for 50 weeks a year will pull in $160/month in retirement for each service year they complete.

If you extend your career five more  years remaining at journeyman status, your retirement benefits would jump up to $76,800/year.

Want to know who doesn’t face a gender pay gap?

When everyone’s salary is public knowledge, it’s kind of hard to screw people over based on their gender.

Not only does joining a union eliminate your chance of facing a gender pay gap, but women are considered valuable assets at Steamfitters Local 449. Our cultural conditioning finally finds a place where it’s an asset as Kappas notes a phenomenon that Sam Paxson has previously put forth as a reason for hiring and retaining women:

“When we’re looking at trouble shooting, women tend to be a very valuable asset to us. They’re more patient and creative in finding solutions.”

He also says that these are assets that serve these union members at all levels, including welding and higher-paying administrative positions.

We as women also tend to be more concerned about long-term financial security, so we see the value that union benefits such as healthcare and defined benefit plans provide to us and our families–whether we’re working on a job site or doing the equally important work of managing the home front.

If you’re curious and want to learn more about this career path, you’re in luck! Steamfitters Local 449 is holding its annual Expo up at its training center in Harmony.

It looks a long way from the city mileage wise, but as someone who has made every possible Pittsburgh commute over my adult life, I promise you that 279/79 is way easy to deal with as it has the least congestion, an HOV lane and is a legitimate highway where you can drive fast.

Yes, I’m looking at you, 51. You’re the reason I will never again willingly commute to the South Hills.

The Expo will be happening on May 23, 2019 from 12p to 8p, and will allow you to explore the field, ask questions of union reps and those currently working in the job position you’d eventually like to secure, and even learn through three continuing education courses.

If you, your child or your partner are interested in a career path that won’t end in dramatic debt you can never shake off, I’d highly encourage you to check it out. There is more than one way to secure upward economic mobility.

6 thoughts on “Of Unions, Benefits and Steamfitters”