Today’s author–Dr. S–is a dad, husband, and finance professor. He discusses personal finance and financial independence on his site, Bull in Captivity. 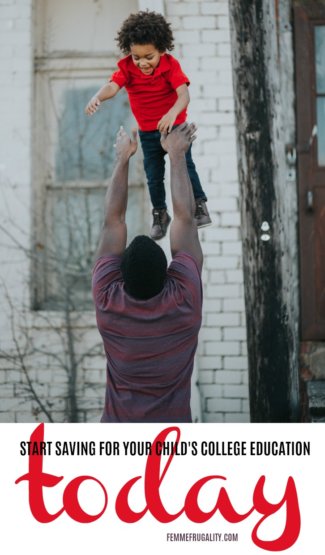 Making sure that our children start their lives off without financial stress is a goal I can get behind. Turning 18 and jumping into reality is tough enough already. Adding the burden of student loans and financial hardship is not a comforting send off.

Unfortunately, college tuition is on the rise, and many students face the reality of not being able to afford higher education without supplementing their part-time income with student loans.

College Board estimates a 2017 annual college budget of $25,000 for state colleges and $50,000 for private schools. Parents seeking to reduce their child’s reliance on debt for college can start saving for their child’s education. But saying, “Start early,” isn’t good enough. It’s important to see the impact of early savings.

Because of the short time span of fewer than 20 years, college funds have a limited amount of time to take advantage of compound interest. This means that you should start investing as soon as possible. This timeline is equivalent to someone beginning to save for traditional retirement at 45. It’s not impossible, but the timeframe is considerably shorter.

Look at these three examples: Monica, Rachel, and Pheobe. Monica starts saving for her child’s college education as soon as the baby is born. Rachel waits until her child is eight before saving and Pheobe begins on her child’s 13th birthday.

Here are the results assuming that they all contribute $100 per month ($1,200 by the end of the year) and earn 8% on average per year. 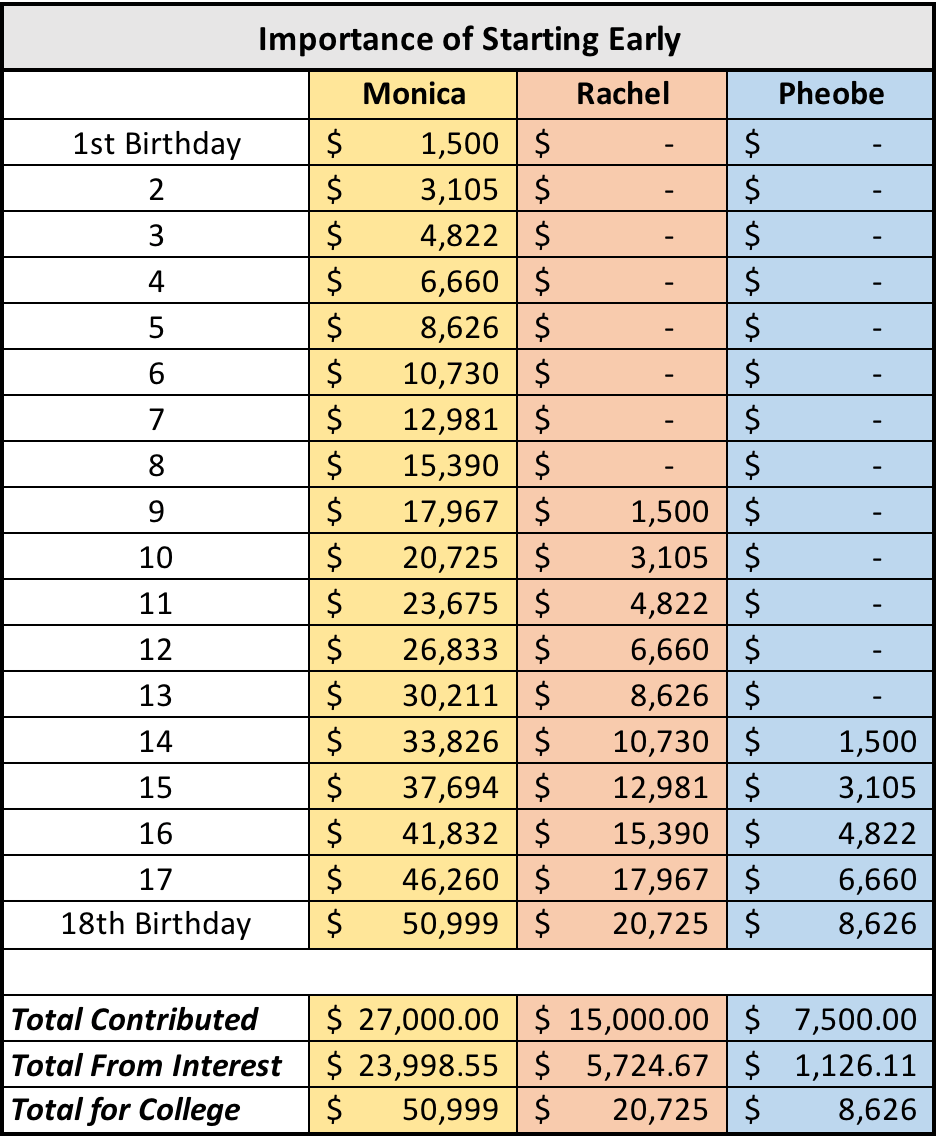 As you can see, Monica has more money in the college account than both Rachel and Pheobe. The higher balance is not only due to the additional contributions Monica saved, but the interest on these investments.

Monica is earning compound interest, or interest on interest, the most powerful force, as described by Albert Einstein.

I know it’s a mouthful, but the interest is acting as another contributor to the account. This is why starting early is so important. The sooner the savings begins, the more chances for compound interest.

In the previous examples, I assumed a return of 8%. This return is not unrealistic but is a return expected for stocks–which are risky.

As college nears, the account should not be invested in very risky investments. The worst thing that can happen is that the summer before your child starts college the stock market crashes and there simply is not enough time for the account to recover.

To mitigate this risk, the account will be invested in less risky assets as college approaches, for example, bonds. Here is an example of an asset allocation that becomes less risky as college drop-off day nears. 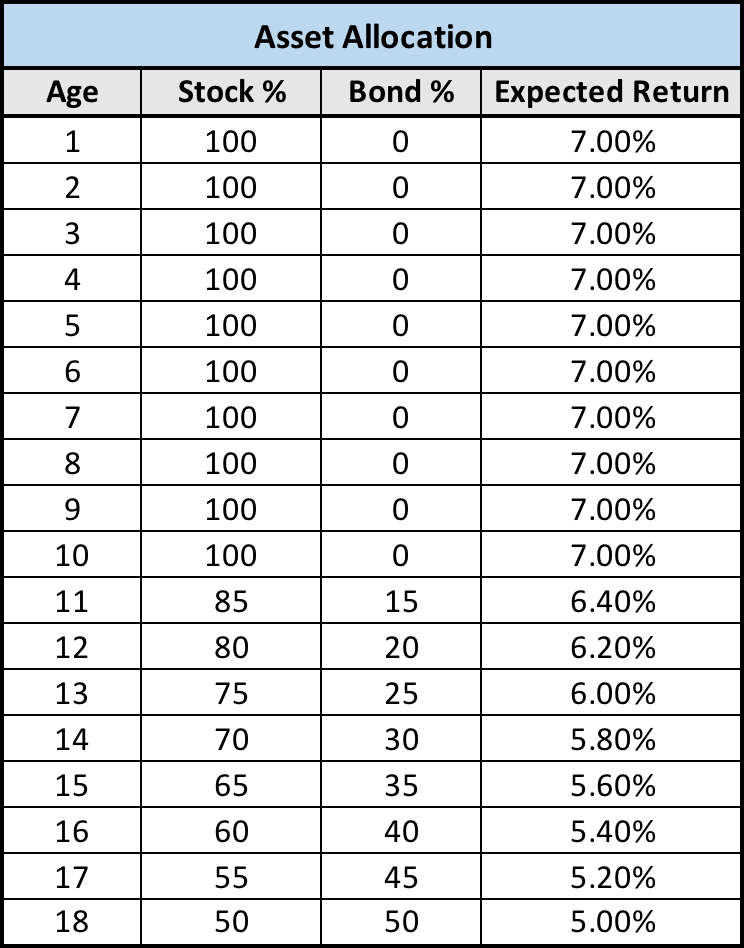 The average expected return for the portfolio is highest at the beginning of savings and drops as college gets closer. Higher risk, higher expected return. The lower risk only makes problems worse for Rachel and Pheobe in our example above. Not only do they have a shorter timeline to invest than Monica, but the returns they have available for compounding are less than Monica. 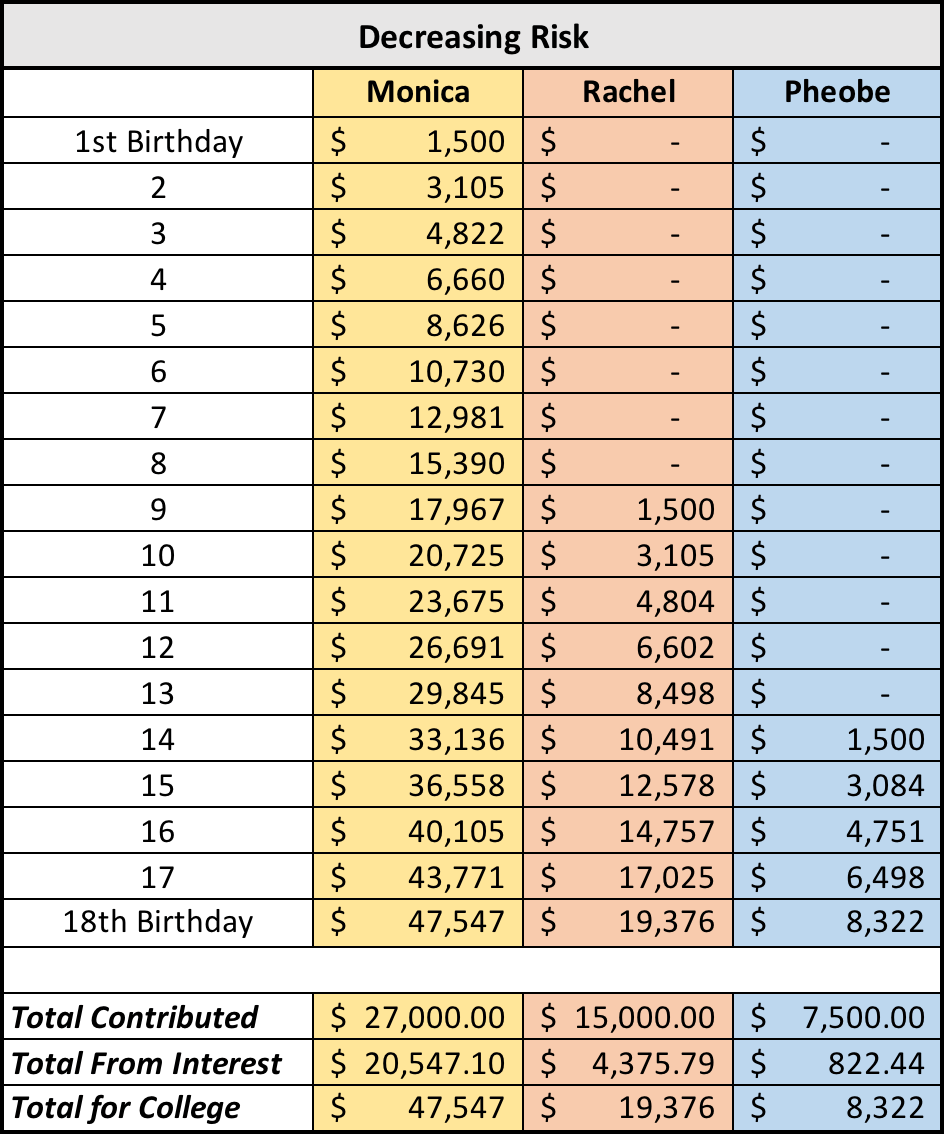 Reusing the same table as before, but with the new expected returns, we see that the results are only amplified. Monica still does better than Rachel and Pheobe, but Pheobe’s account is not looking good.

Is it too late?

There are a few options available if you have not started saving as early as you would like for college education.

A 529 plan is the most popular college savings account. The withdrawals from this account must be used for school or a penalty is placed on the account, so if your child decides not to go to college, this could be a problem.

Many states offer college plans with tax deductibility benefits. You will be able to save for college pre-tax, which helps you increase contributions. Many of the requirements and benefits for college savings plans are state-based so doing a brief search on your state’s options will give you a wealth of information.

Have a disabled child? Check out ABLE accounts.

Other options include a traditional brokerage account which is just an after-tax investment account. There are no tax benefits, but you can use the money for anything including buying your child’s first home or even starting a retirement fund for your child if college is not an option.

At the end of the day, any benefit you provide for your children going to college will be a big help. However, starting early means a bigger account from both your years of contributions and more importantly the help of compound interest.