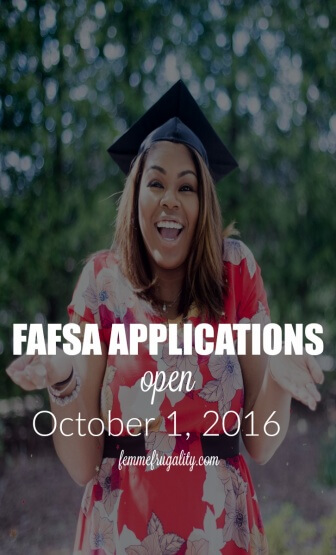 Tomorrow signals the start of a new practice with FAFSA applications, which is important for both non-traditional students and parents of college students alike.

In years past, you had to wait until January 1st to apply for the FAFSA. This was a mess for a ton of different reasons. The first is that most people don’t even have their W-2s until January 31st unless their employer is overly ambitious, so filling out tax information before actually filing was a nightmare and usually required amendments.

Because of those issues, FAFSA applications now open on October 1st. That means the application you fill out tomorrow will be for the 2017-2018 school year.

Prior Prior Tax Year Data

That also means that instead of your 2016 tax year data being pulled for the 2017-2018 school year, the federal government wants you to submit your 2015 tax year data instead. That’s kind of beautiful because you’ve already submitted it. It can now be pulled up electronically sparing you the drudgery of going through all of your tax documents and matching them to the required online forms.

Filing Early Means They Won’t Run Out of Money—Right?

Common advice tells you that Pell Grant funding is limited, so you should apply early to get your hands on those funds that you never have to pay back.

This is true, but typically the money doesn’t actually run out. For the 2015-2016 school year, applicants left $2.9 billion on the table. While applying early is still smart practice (I’d hate this to be the one year they ran out,) the bigger message is to apply—even if you think you won’t qualify.

The FAFSA doesn’t just open up opportunities for Pell Grants. It also opens the door for you to apply to state grants. It also issues work-study opportunities and gives you access to advantaged government loans. (Even though I’m all about doing college debt free, if you’re going to take out loans you might as well do it smart.)

On top of all this, to open the doors to funding from your individual institution, most will require you to have a completed FAFSA. The moral of the story is this: there is “free” money out there. Don’t leave it on the table. Apply. Apply. Apply.

6 thoughts on “FAFSA Changes That Affect You Tomorrow”