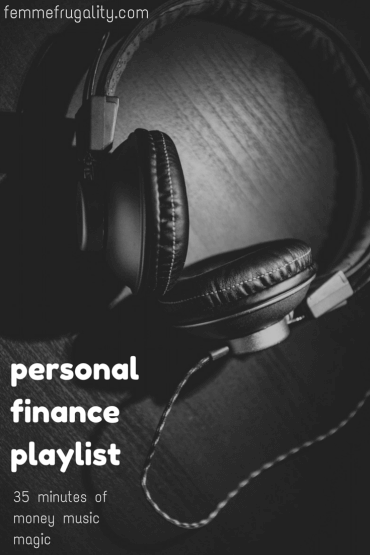 Music is one of my favorite things about being alive.  It inspires.  It relates emotions we otherwise couldn’t portray with spoken word.  It can speak to our souls.

There’s a problem when we start talking about money and music, though.  Money also inspires a lot of emotions in people.  A ton of the songs are either depressing or braggy, which can also end up being depressing for the listener.

Our new-to-us car has an audio jack, which is one of the most amazing things ever.  My last car predated iPods, none the less having them in your car.  Ever since we bought it I’ve been listening to PodCasts at an audible level and making playlists to avoid listening to songs that suck on the radio.

Thus, a personal finance playlist was born, chock full of money music.  Was I able to avoid all the depression and bragging?  No.  But I’ve found some pretty relatable, and most of them are upbeat at least in the tempo.  I like to keep our outlook on finances positive here.

I use YouTube for my playlists.  Because it’s free.  But if you do end up listening and you’re listening behind the wheel, FOR THE LOVE OF GOD don’t watch the videos while you’re driving!  Most of them suck anyways!  This is all about the music and not so much about the visuals.

It’s about 35 minutes long.  I tried to keep some type of flow to it.  Here’s the lineup:

1. Can’t Buy Me Love by The Beatles-  Because it’s true.  Money is great.  But it holds no power over that thing called love.

2. Common People by Pulp- For all those rich girls (or boys for that matter?) who think rebelling against their upbringing will bring them depth of character.  Newsflash: It’s artificial. Only the fire born understand blue.

3. Danny’s Song (covered) by Me First and the Gimme Gimmes- Because that’s what happens in life after you’ve found that love that money can’t buy. And I like this version thirty times better than the original.

4. Bills by LunchMoney Lewis-  I crank this one when I’m headed into a rough job.  It’s great for anyone who wants to make it through their workday with a little more motivation.  Gives me a more positive attitude.  (The video is crazy silly, though.  Again, don’t watch it while you’re driving.  Distracted driving kills.)

5. Thrift Shop by Macklemore- Because it’s a frugalista’s theme song.  And will help you build wealth while you’re working towards that 50 thousand LunchMoney Lewis’s lady wants.

6. She Works Hard for The Money by Donna Summers- Because it pushed for respect of women in the workplace.  Or just pushing for respect in our personal lives for people who bust their bums to support their family.

7. Money by Pink Floyd- How they managed to encapsulate so many opposing views of money in three verses is evidence enough of their greatness.  Of course, I’m ignoring that the first two come off a little contemptuous.  Can’t lie and say I disagree with them.

8. A Good Idea at the Time by OkGo- Because it inspired this post about what to do when you buy a group buying deal that you later realize was a rip off.

9.  Make the Money by Macklemore- Here they are again.  But this one was such a great way to wrap it up.  After you’ve made all that cash, don’t forget who you are.  Don’t lose your soul in the pursuit of riches.