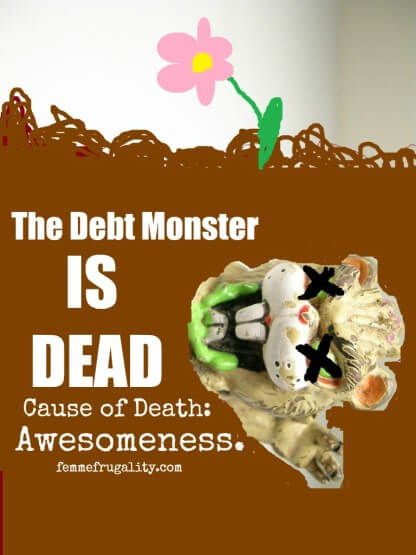 Good news!  That debt is dead!  It got paid off a month and half ahead of schedule!  It’s a good feeling to have it gone, even though it wasn’t super massive.  To continue with the good news part of the post, here are some tips we used to pay it down:

If you want to figure out how to pay off your own debt, I’d highly recommend this amazing debt calculator. It allows you to play around with payments and payoff dates, giving you the power to make a plan.

You may remember me mentioning my car and how we had paid it off years ago.

I just shouldn’t mention anything positive that happens in our lives ever.

Recently, it broke down.  It was the best car ever.  Seriously.  It never gave me any major problems beyond regular maintenance.  It was a decade old.  And when it went, the engine just died.  Irrevocably died.  Died so hard there was nothing we could do about it.  But died so suddenly that we didn’t sink hundreds to thousands into it in repairs before it went.

So it even went out lovingly.  And for that I will always be thankful to it.

Luckily, we had enough in our emergency fund to put a down payment on a new-to-us car without leaving our balance low enough to wig me out.  So I have a car payment.  I’m not debt free.  I can’t do a happy dance.

But I needed to diversify my credit streams, anyways.  As long as we pay this one off as aggressively as we did the last one, odds are it will actually help my credit score by the time we’ve got that down payment for a house.

And then when we have that we’ll have a mortgage.  Maybe someday we’ll pay that off super early.  But as I’m growing older, I’m learning that for me, being debt free isn’t really the goal.  I’d love to preach extreme frugality, but I’m not biking 20 miles on a highway in God knows what direction everyday, and our public transport to the suburbs mostly sucks.  So it’s a car or quit my career, which would be a bigger loss than our modest car payment.  I’d love to pay for a home in cash, but if we keep renting the inflation in the renting market will make it so we can’t even save for a down payment.

For me, the goal is to keep my debt manageable while being prepared for the emergencies in life that always crop up when you’re least expecting them.  The debt free-ness that I held onto until my late twenties may not reign again until I’m closer to retirement.  But that doesn’t mean I have to rack up oppressive credit card debt.  That doesn’t mean that we’re going to suddenly give up the student-loan-free path we’ve taken to get the husband through college.  That doesn’t mean I have to let that four letter word detract from living a meaningful, happy, and fulfilled life.

Life is a compromise best fulfilled through moderation.