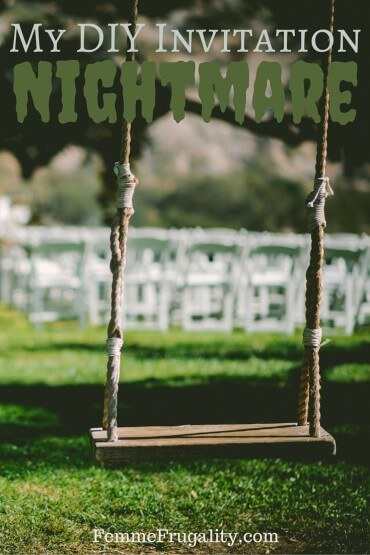 There’s a reason I’m not DIYing a lot on this whole wedding thing.  I’m not very good at it. But I thought I’d give the invitations a go because there are so many free templates online and I know how to use a printer.

Or so I thought.

I found this free printable kit.  I think it’s super pretty.  And it was really easy to input all of our information.  Then I went to print them.  The invites themselves came out easily enough.  And then I tried the RSVP cards.  I had this crazy idea in my head that I’d just use them as postcards, printing our address on the reverse and saving a little bit of money on postage.  I could not get the front to line up with the back for the life of me.  Then, when I finally found a quasi solution, I went to cut them.  The pattern says they’re 3.5×5, which is the smallest a postcard can be, but I guess what that means is that they will fit into a 3.5×5 envelope.  Which makes the whole postcard idea impossible as the card is just a little too small.

So I ran out of paper.  And my printer ran out of ink (only the color that I kept using for the damask on the side of the invitaiton.)  Plus I now needed tiny envelopes.  Which I tried to print addresses onto from the computer because my handwriting isn’t the best.  (Another epic fail…I think this printer just hates me; I’ve printed envelope addresses in work settings before.)

But I finally got it done.

Four nights of headaches and swearing at my printer after the kids were in bed:  Priceless.

What I Wish I Had Done Instead

I should have just ordered them online.  I discovered Invite Shop a few days too late. They have really cute designs and are priced right.  If I had bought from them, my costs for the invitations and RSVP cards would have been around $44.19 including shipping.

Plus I would have bought envelopes (which I would still just do at Michael’s; the price per unit is better there, though it’s not enough of a difference that it should keep you from “splurging” on convenience if that’s what you’re after.)  So add $10-ish to that.  In retrospect, I’d pay $17 more to get those four nights of my life back.

So I found super cute invites.  And even though it’s too late, I messed around with the personalization tool.  And it’s amazing.  You can move everything around if you want to.  I wouldn’t on all of them, but you can get really detailed.  Like I can make this heart over Pittsburgh instead of Seattle-ish. 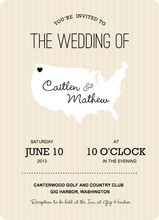 And you can put engagement pictures in here:

Or just keep everything the same and go classically elegant: 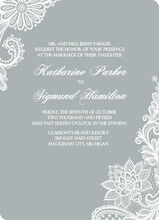 As a total aside, I’m pretty sure this would be the fiance’s pick.  If he cared about things like wedding invitations.  And if I hadn’t already mailed those suckers out:

I found matching RSVP cards for all of them, too.  We’re having a very small wedding, so I thought I was up to the task.  Not that many invitations.  I was wrong.  If anytime you try to do something DIY you hit a snag or major pothole, save yourself a headache and just order them.  Prices weren’t that different, and it would be so worth it to not have to spend hours at something I hated and hated me back equally.

How did you do your wedding invites?

17 thoughts on “My DIY Invitation Nightmare”