CONFESSION:  Every year for Christmas I get an astrological calendar.  One of those ones that tells you your horoscope for every single day of the year.  I love it.  Every time I get to the end of a pregnancy, I read it like a Bible searching for some hint that tomorrow will be the day I finally start to get my body back to myself.

But any hint I find is totally and incorrectly inferred on my part.  Things like this tend to have very little truth behind them; how could they, being such a mass produced product for so many people?

But as of 2009, Americans were spending at least $200 million a year on astrological products including horoscopes, tarot cards, and personal readings.  So someone must be doing something right.  Right?

Think Claire in Lost.  Remember how she went for a personal session with a psychic (is that the same as an astrologist?  Just pretend it is for the sake of my example.)  He was reading her palm or feeling her chi or something like that and was very concerned about her baby; so concerned that he put her on a flight he knew was going to crash so she couldn’t give up her baby for adoption.

(Sorry for the pseudo-spoilers, but if you haven’t seen it yet, I figure you really don’t want to.)

Astrologists can do things like that in real life, too.  Maybe not quite as specific.  It was a TV show.   But there are some who can create an entire star chart for either a specific period or the entirety of your life/personality based on the time of day and location where you were born.  I’ve always wanted to get something like that, but the real thing costs hundreds of dollars.  And I just don’t know if I’m that eager.

I do believe, though.  The problem is it’s hard to know what’s good to believe in a prescriptive manner.  Descriptive context makes it easy to discern a real from a fake, but the whole point of readings and horoscopes is to be predictive, right?  For instance, my friend has this really cool book that has you look up your general life’s horoscope based on your birthdate.  Whoever wrote this book had skills.  We looked up our own and that of our friends, laughing and blushing when the good and bad aspects of our personalities and tendencies were revealed with startling accuracy.  But the only reason we know it’s good stuff is because our lives and personalities have already come a long way in taking their form.

How about financial horoscopes?  Again, I wouldn’t make any major money decisions based on them, but they can be fun to check out.  Here’s a link to all twelve of them for the current year.  It includes career info with the finances.  (Click on the pic below.) 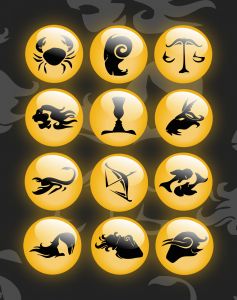 How is yours looking so far?  Incredibly accurate?  Insanely off?  Do you buy into the booming industry as a science or something silly that cons people out of their hard earned cash?

27 thoughts on “Is Your Money in the Stars?”