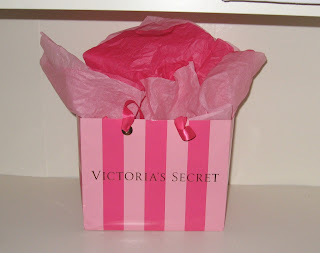 I try my best to save money.  In any way I can.  Most of the time my rational self lets the rest of my brain know when being “frugal” isn’t in my best interest.  But sometimes that rational part takes a nap and I do inappropriate things.

My friend’s son was turning three.  We went out and got an appropriate present for his birthday.  I have a stash of gift bags and tissue paper in my closet. I save them from gifts we receive.  So I never spend money on gift bags.  And most of the time I’m able to dodge wrapping things.  It’s great.

But this time as we were heading out the door, I searched my stash and all I could find was a Victoria’s Secret bag.  I shrugged, wrapped the present, and got ready to go out the door.

The boyfriend saw me.  “You’re wrapping it in that?”

He looked at me funny, but gave it up.

We went over to the birthday boy’s house, ate cake, played with balloons, and gave him his present.  I was right.  He wasn’t really concerned about the wrap job.  He tore through to find the present.

Now, a year and a half later, I’m looking through some old pictures.  And realizing what an idiot I am.  “Look, here’s the birthday boy opening his mother’s friend’s underwear bag!”  I can only imagine what Momma was thinking.  I don’t know what I was thinking.  Reason and rationality were taking a nap.  I should have just gone to the dollar store and picked up a blue bag.  Or something pink that didn’t advertise where I had most recently bought underwear.

Do you have an experience where your stinginess led to inappropriate behavior?

53 thoughts on “When Appropriate Behavior Yields to Stinginess”