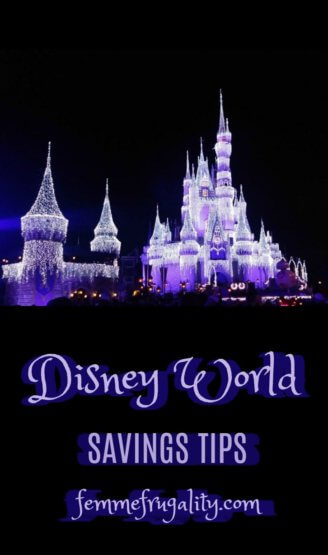 The capstone on our Florida trip was Disney World. We had gone not all that long ago, and I had politely put in a complaint about accessibility issues at the park. They offered me free tickets to compensate us for our troubles, so we tried again a few months ago.

Things were mostly better this time. Far from perfect; policies at the park still do not give adequate access to the disabled. But I appreciated that they tried and that we only ran into one gnarly park employee this time around.

Aside from having an overall better experience, I did learn a couple things I wanted to tack on to last year’s Disney savings tips.

I spent an embarrassing amount of money on a balloon for one of the littles. I mean, it was pretty awesome. A balloon inside of another balloon–both of which have yet to pop.

The quality might be the reason why the balloon lady let me in on a little secret: you can totally exchange your balloon. If it pops or flies away, just bring your receipt and any balloon remains to the nearest person selling balloons to get a replacement.

Now, let’s say you bought your balloon at Magic Kingdom. The balloon floated away on your way to the car, but you’re not going to Magic Kingdom the next day. You’re going to Disney Hollywood Studios.

Doesn’t matter. Take your receipt to the balloon seller at Hollywood Studios and they’ll get a replacement with no hassle.

Yes, I was tempted to take my receipt to the balloon seller at Hollywood Studios to score a second awesome balloon dishonestly.

Eat before you go to the park.

Last time we went to Disney World, we tried to wake up early and get there as soon as the parks opened. It was May. It was muggy. Everyone got moody.

So this time, we left a little later in the morning, grabbing a leisurely brunch on the way there. One day we did pancakes in the timeshare (which was once again kindly given to us as a gift by a family member), another we hit up a diner, etc.

In turn, we grabbed one meal, generally at a quick-serve place, while we were at the park and stayed out past bedtime.

If we judge by happiness levels, this was a much better plan. Although another contributing factor may have been the time of year.

I mean, was I happy to pay $60-$70 for quick-serve food? No. But if I’m honest, the quality of food there was higher than what we would have gotten at the fast food joint I would have stopped on the way home out of sheer exhaustion. The price wasn’t ideal, but…

Budget-wise, it was a major win over last year. We ate far fewer meals at the park total, and I cut the character meals altogether. We had already done that once, and the hack I found to meet characters for free for sure at a scheduled time was employed heavily this time around. Calling it a hack might seem like a bit much, but after you’ve spent money on the character meals, it feels like one heck of a hack.

So we didn’t have to stress about meal plans, It also meant we weren’t rushing around to make our reservations because we didn’t have any. So. much. less. stress.

And so much less money.

Around the different parks, you’ll see opportunities to get your picture taken. Sometimes it’s with mascots, sometimes it’s just at a scenic park. We noticed a bunch of these especially in Animal Kingdom.

I don’t have the best camera on my phone and I’m not the best photographer, so this time I made sure to purposefully take advantage. I tried to bunch together all our professional picture taking at two parks so I could pay to buy the photos from the Disney app for each day. By only doing two days, I was able to save money over paying the “whole trip” price.

Unfortunately I did that last time. There were just too many great memories and pictures. But I did learn the bunching method from that experience.

Do you have Disney World savings tips?

What are your favorite Disney savings hacks? Leave them in the comments!