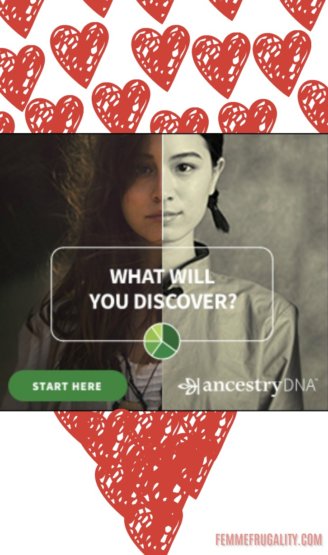 With Valentine’s Day coming up, I’ve been wanting to do a new, holiday-centric piece. I wasn’t exactly sure where to take it this year, though. I wasn’t feeling incredibly sappy, so I instead went incredibly nerdy.

I started thinking of all the DNA we all carry in each one of our cells. How that DNA contains a history of countless couples mating in some way. And how the end result of all of that history and all of those lives is you.

And that in and of itself is pretty amazing, whether you have another set of DNA cuddling next to you on the couch or not.

If you don’t feel like waiting until the end to see how this pertains to money, Ancestry is having a super sale on AncestryDNA for Valentine’s Day. I usually only write  about the sales on this product for Black Friday as that’s the biggest one they have all year, but this one is dramatic enough that it’s worth shouting from the rooftops.

You have a lot of ancestors. And they might not have been human.

If you trace back just 30 generations, or about 1,000 years back, you have over 1 trillion direct ancestors. Homo sapiens are 200k-300k years old. I don’t know how to pronounce the number of ancestors you could potentially have, friend.

Except you don’t have as many ancestors as basic math would imply. Humans have inbred over their history, and not everyone has had kids. There are significant bottlenecks in the DNA story of each one of us.

Our ancestors were mostly human. Some but not all people will have some Neanderthals and Denisovans in their direct line, too, though.

Eve is real. Kind of.

Mitochodrial DNA is passed on from your mother’s side. Always. What that means is if we all trace back far enough in our mitochondrial DNA, we should be able to find our initial mothers.

Except that we all have one mitochondrial mother, aptly named Eve. Eve wasn’t the only female around at her time, but her mitochondrial DNA was the only one to survive. That doesn’t mean you’re not related to another contemporary of Eve’s on your father’s side, say, or even your mother’s side through her father.

But it does mean that the mother-to-child mitochondrial DNA chain was broken for all of her contemporary females, but not Eve. We all call the same common anscestor, “Mom,” though she was not necessarily the very first human mother.

When we look at birth months in the US, there is a significant drop in October and November, right when you’d expect Valentine’s Day babies to be born. Instead, the most popular times to exchange DNA appear to be November and December, according to the CDC’s birth numbers. This assumes all babies will be born on their due date, which is a noteworthy asterisk.

I love this nurse midwife’s insight into the whole thing. Like she talks about Polar Vortex babies: Because when no one can or wants to leave the house, they apparently get together more. Then nine months later, she’s crazy busy at work.

There’s a sale. Learn more about your DNA for less.

This year for Valentine’s Day, Ancestry is lowering the price of their AncestryDNA kit from $99 to $59–that’s 40% off! It’s not too often that they have sales this big, but when they do, AncestryDNA is a reader favorite.