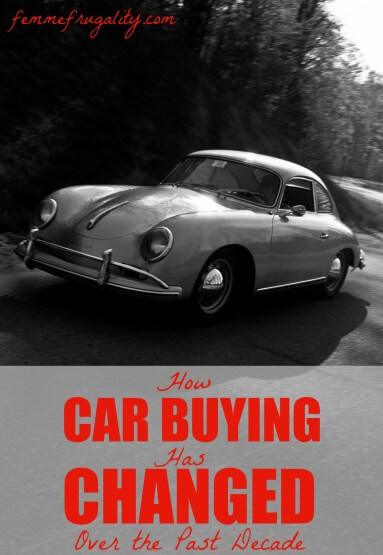 Recently, we had to buy another car.  The old one died, and finding it’s replacement was a little bit of a nightmare.  The old one was a great foreign car that had given me little to no problems over the years, but I sure had racked up the miles on it over the last decade.  When I bought it, there were negotiations, but mostly it was listed at a great price with only 3k miles on it.  I bought in a different state, but shopped in my home base of Pennsylvania, too.  At the time, prices in PA were ridiculous for cars that were mostly rusted out from winter salt.

When I went to buy this time, I was in shock.  Prices had shot even further through the roof.  We only looked at used, and I had issues finding a car with under 100k miles under 10 grand.  (Though, I really should learn to drive stick.  That makes things a heck of a lot more affordable!)  I even checked in the state I had previously purchased in, but now their prices were comparable to PA’s, and just as inflated.

Eventually I found one with around 40k miles on it for a good bit under 10k with an automatic transmission.  When I went to look at it, it was very, very basic.  No power windows, locks, or any bells and whistles.  But with the market the way it was, all I cared about was that it ran well and would last us longer than the loan would.  That domestic car is my new transport, but I was left asking the question…

Why Has the Market Changed?

I understand inflation plays its role over the course of ten years, but this price difference was unreal.  I bought pre-recession, and pre-cash-for-clunkers.  When Cash for Clunkers encouraged people to sell off their older model vehicles to be destroyed in the name of carbon emissions, they took an enormous percentage of used inventory off the market.  (This is not a loaded statement.  I’m all about reducing carbon emissions.)

Simultaneously, people started what a horrible idea buying new was.  Strapped for cash due to the recession, even those who like making bad money decisions on sparkly things were forced to accept the practicality of purchasing pre-owned vehicles.  The demand for used vehicles went through the roof, and now there was less inventory than ever to supply it.  If you’re familiar with the basics of supply and demand, the spike in prices will seem inevitable.

How Has the Market Changed?

On top of that increase in price, in our Pittsburgh market the entire buying process has changed.  How has car buying changed?  Most major dealerships refuse to haggle anymore, saying that they’re already listing at their lowest prices.  Their salesmen are generally paid on commission not for the amount of money they bring in, but for the quantity of vehicles they sell.  So presumably they have no incentive to sell you a more expensive car.  They just need to get you into something.

Where there may still be wiggle room in this process is the price of the trade-in.  If they’re not willing to budge on the price of the new vehicle, they may be willing to negotiate how much they’ll give you for the old vehicle you’re trading in, lowering how much you’ll pay for the new-to-you car without moving the sticker price.

Is Buying New Really Such a Bad Idea?

I’ve always believed that buying used was the best way to go.  Don’t get a beater that will cost you more in repairs than a loan would, but don’t buy brand new and watch your vehicle depreciate before your very eyes as you drive off the lot.

I’m seriously considering changing my opinion.  As we were going through this process, my radio-listening skills were especially acute every time a dealership commercial came on.  It was still the depths of Pittsburgh winter, and that’s generally a good time to buy a vehicle from the consumer standpoint.

I heard several advertisements for dealerships, including one that sold the foreign make of my last vehicle that I loved more than any other machine ever, offering brand new vehicles right at the $10k mark.  I’m sure these were the most basic models available.  I’m sure they had no bells and whistles.

But neither does my pre-owned domestic.  And for a thousand or two more, I could have had a car from a manufacturer I had more faith in, 40k miles more on its lifespan, and a longer period left on its warranties.  We drive our cars until they die, so the depreciation doesn’t mean a whole lot as you almost always end up upside-down on a car loan, and the difference in monthly payments would be negligible.  For the first time, I’m questioning if buying used is the way to go.  If our next car breaks down in the winter when dealerships that sell new are desperate to clear inventory, I may just do the unthinkable and actually make a trip to their lot.

Hopefully we have another decade until that happens, though.  And who knows?  Maybe car buying will have changed just as radically in the next decade as it has in this one.