Toxic workplaces present very real problems for employees. Discrimination based on your gender identity, gender, or sexual orientation can affect decisions to stay with an employer or leave, leading to an unnecessary loss of talent and productivity. 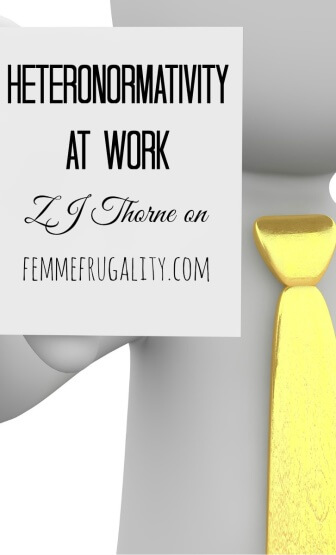 A simple definition is in order and we’ll borrow from wikipedia, for simplicity’s sake, if you don’t mind. “Heteronormativity is the belief that people fall into distinct and complementary genders with natural roles in life. It assumes that heterosexuality is the only sexual orientation or only norm, and states that sexual and marital relations are most (or only) fitting between people of opposite sexes. Consequently, a “heteronormative” view is one that involves alignment of biological sex, sexuality, gender identity and gender roles.”

Many people think that sexuality has no place at work. It’s already there. Permeating everything. People wear wedding wings, talk about their spouses, have photos of their children, bring their spouses to work functions, discuss fertility issues and trying for a baby at work, etc. Human Resources wants to know your marital status to update your tax forms and potentially include your spouse and progeny on your health insurance and other benefits. When you name beneficiaries for your life insurance, you are showing who matters to you.

What they mean when they say sexuality has no place at work is that they do not want homosexuality mentioned at work. They mean they don’t want gender identity addressed at all. They are comfortable hearing women talk about how hot Channing Tatum is, but a woman mentioning how beautiful Michelle Carter’s powerful muscles are makes others uncomfortable. Best to say nothing, really.

Heteronormativity shames workers via dress codes and bathrooms. You may not even be hired because of your non-normative presentation. You may be called into HR because the unnecessarily gendered dress code specifies that men must wear a tie, but you are not a man. Your outfit is tailored, clean and well-pressed, but you are being different from other women and that makes HR uncomfortable. Your work product is stellar, but you make people uncomfortable.

You don’t even have to be out at work (many people are not) for heteronormativity to impact you.   You would not even have to come out if people would stop assuming your sexuality and gender identity and being wrong about it. Heteronormativity forces the closet on us and then demands that we correct their misconceptions.

When you assume that people are straight and cisgender because they have said nothing on the matter, you are being heteronormative. You are also missing out on important information about people and their lives. You are making it awkward. Stop.

There are still no nationwide protections against LGBT discrimination at work. You can literally fire a person for discovering that they are transgender in most states. You can fire a person for being bisexual or asexual in most states. Your workers know this and are afraid. They are not able to relax, because they are not safe. One middle-manager who is homophobic can ruin their life and personal finances.

“For the Fortune 500 companies that have internal policies which forbid LGBT discrimination, 96% of them state that their workplace policies have led to greater productivity and a general increase in overall morale.” via Brandon Gaille.

Whether you realize it or not, sexualities and gender presentation are regulated by social norms and institutions. When you are congratulating a married heterosexual for their birth announcement, you are likely congratulating them for sexual activity. However, when a same-sex couple announces a pregnancy, the questions they receive are often inappropriate and invasive. You would never ask a straight woman how she got pregnant even though we know that IVF and sperm donors and infidelity are real sources of pregnancy. People ask gay women how they got the sperm. They ask about the donor. They ask if you slept with a man just once, since it’s the “easiest” way, you know. Har har.

There are benefits to employers to combating heteronormativity and making it safer for their LGBTQIA employees. In one five-year study, the results showed that employees working for out gay managers actually had 25% higher employee engagement. The study found that “Gay leaders value their employees as a whole, because they, themselves have experienced what it’s like to be judged for one thing, rather than valued for who you are.” via StartOut.

There are many LGBT entrepreneurs and they are doing what they can to protect their employees. According the National Gay & Lesbian Chamber of Commerce Diversity Initiative, there are 896 certified LGBT businesses. There even are more businesses that have not gone through the certification process. The Diversity Initiative’s numbers go up every year.

“From 2005 to 2014 more than 1 million jobs created by LGBT entrepreneurs left discriminatory states in favor of inclusive states. Of those, 78 percent moved to California, New York and Illinois. States with policies unfriendly to the LGBT community lose many if not all of their nascent growth entrepreneurs.” via StartOut.

Heteronormativity and homophobia have existed in all but one work environment I have enjoyed. Even now, I have a coworker who corrects me when I mention my girlfriend. She literally interrupts me to say “your friend.” Seriously. I live in a relatively liberal area, but still get this disrespect of my relationship.

Tiring of the heteronormativity that told me that I was wrong and did not fit, I created my own business. This business serves the LGBTQIA community with knowledge and empathy. This business allows me to dress as a professional rather than as a professional woman. My job is losing a hard working intelligent woman with knowledge of their systems. My job is losing someone who thinks outside of the box and saves them money via reduction in inefficiencies. They are losing a lot, but they have not made the environment one in which I can thrive.

In the end, I started my business, because “I don’t want to just show up. I want my work to reflect my values. I am creating that work.”

9 thoughts on “Heteronormativity at Work”