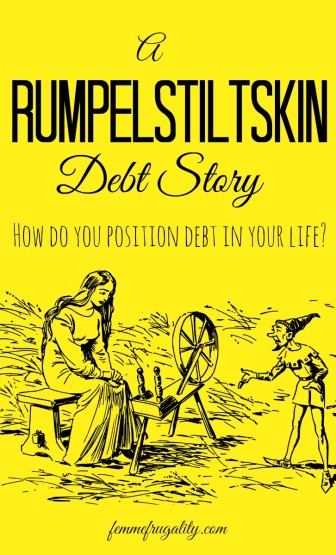 My first year out of high school, I worked at a pizza shop. My bosses were a young, married couple who were expecting their second child. It was a pretty chill place to work as I navigated my first collegiate experiences. Mostly I worked weekends.

They had trouble deciding on a name for their baby boy. One weekend, after not seeing my coworkers for five days, I came in and there was a baby carrier on the floor with a little bundle of joy secured inside.

“Chase.” My boss went on to tell me that as her husband was going through their pile of bills (opening a food franchise isn’t cheap,) he kept coming across one name more than any others. It was the name of the bank that held most of their business debt.

“Honey, what do you think about the name ‘Chase?'” he asked.

And so Rumpelstiltskin was born.

How we position debt in our lives

I always thought this story was uncomfortably weird. Hopefully, someday they’ll have the debt paid off—maybe they do already—but their son will always bear its name.

When thinking about it recently, it made me think about how we position debt in our lives. That first year I was in college, I decided student debt would have nothing to do with my name. It led to a long road of low wages, but I would have graduated at the height of the Great Recession, anyways. While I wasn’t raking in the dough without a college degree, I also didn’t have any obligation to a student lender.

I’ve decided over the years to take out car loans after owning a long line of beaters paid for in cash. These loans do add debt to my name, but they also have always added value as they’ve allowed me to reliably and safely commute to jobs that pay me more than my monthly car payment. They’re a net win in my specific situation. (Though maybe someday I’ll have enough cash on hand to pay for it flat out.)

The last time we faced debt as a couple, we designated it “The Debt Monster.” It was an evil entity, and we needed to kill it as quickly as possible. The framing worked.

Maybe my old bosses liked the name Chase. But at the time, their business was also the core of their existence. It’s easy to see how the debt associated with it would hold such a strong sway on their naming decisions.

At the time I initially started college, I could have easily put debt to my name. I could have justified it by arguing that I’d make more money when I graduated from school. I probably wouldn’t have, but there’s no way anyone could have been that clairvoyant prior to the housing bubble debacle.

I could just drive around beaters or suffer without a car until I somehow had enough money to buy one without working. It would be harder to bring in money, but we also wouldn’t have as much to deal with in monthly payments.

And we could have accepted The Debt Monster as a part of life that most Americans deal with. We could have dropped the name “monster” and made minimum payments as we chipped away at it in moderation.

So much of how we deal with money depends on our perspective. Over time, our perspective changes as does how we treat our finances. Fortunately or unfortunately, our names don’t.

How do you position debt in your life?

8 thoughts on “A Rumpelstiltskin Debt Story”