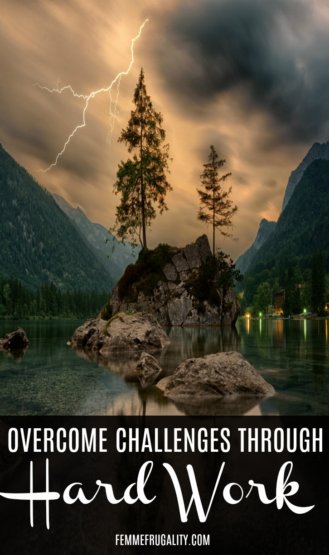 Lately I’ve been thinking a lot about where I am in my life.

Some areas I’m happy with. Others I’m not.

I’ve been through some good times. And some bad times. Of course, there were the terrible times, too.

But through it all, one thing has kept me going: a strong work ethic.

I say this not to brag. I’ve made as many mistakes in my life as the next person, and I’m certainly not sitting upon a mountain of cash that would make me financially independent.

But for all the times when things could have gone much worse, I’ve remained determined to make things work. Some of this has been born out of living in survival mode, and some of it has been a refusal to fail. Well, maybe not to fail, but rather a refusal to give up.

Knock on the Door of Opportunity

When I was newly married and very young, I had a hard time finding a job. Even ones I was overly qualified for.

I was looking at going back to school, but there were very few degree programs for my field. I didn’t know which ones to enter, so I looked up a chapter of a national networking/certification group. I wanted to go to ask them what educational opportunities were available.

Lo and behold, there was one meeting that very week right across the street. I went, and while I learned that unfortunately there weren’t very many good educational opportunities in the region, there was an agency that was hiring. And we immediately clicked.

That led to one of the most fulfilling jobs of my life. I loved getting up to go to work everyday, and I gave my all to be the best I could be in that position. I went to all the trainings that came through town. I practiced a ridiculous degree of professionalism. When I had to move, there were so many tears all around.

I never would have had that experience, though, if I had just given up on making things better. If I hadn’t looked up that networking group to find educational opportunities, I would have never met my bosses. If I hadn’t continued to pursue education through professional trainings, they may not have been as apt to give me challenging and exciting assignments.

Part of work ethic isn’t just doing the job that’s in front of you. It’s about actively pursuing all the paths to potential opportunity.

Some say opportunity knocks. In my life, I’ve found it to be the exact opposite. I knock. Sometimes no one answers. Sometimes the door gets slammed in my face. But sometimes, the door opens and you’re welcomed into a new realm of possibilities.

Life can suck. For all of us.

But how we react to that reality impacts the trajectories of our lives. All too often, it’s easy to see a problem and view it as an insurmountable road block. These do exist, but that doesn’t mean we should acquiesce to them.

Always try to find a way over. Around. Through. It can be rough, but if we allow ourselves to sit there in frustration, we’re essentially stalling out our potential. I’ve done this a few times in my life, and I always regret it later.

When I have my head on right, I try to look the problem in the face and find solutions. There was another period in my life when I had a hard time finding employment. It took me four months, actually, and I was very grateful to my past self for saving up a nice emergency fund to get me through that time. Even with that, I got a part-time gig at the local grocery store to pad things about three months in.

But during those months, I didn’t give up. I applied to jobs up to two hours away from my new rural home. I told everyone I knew I was looking for something. I once again went to the places where people were networking, and did volunteer work to showcase my skill set.

This eventually ended up leading to two job offers in one week. One was full-time. One was extremely part-time and sporadic.

I took them both.

Instead, I looked everywhere to find a solution, and it eventually paid off. Again, I had a rewarding job I looked forward to going to everyday.

Doing what I’m doing right now full-time was never a goal of mine. I loved my career, but a regional work shift/shortage revealed to me that it was going to be unstable–at least for a few years.

I needed an income today, though. Not in a few years. I had been side hustling a bit with the online writing thing, but when I found out I wouldn’t have regular work anymore, I started putting in the hours. I actively hunted for writing jobs and worked to build up this site a little more.

It worked and has been supporting me and my family for years now. I had to do the work, though. I couldn’t do it half-heartedly. I had to put everything into it.

The same has been true for me in pursuing many of my other goals, too. Most of them are tied to language. I learned the Cyrillic alphabet through hours of practice. I got really good at French by reading French books and watching French movies on top of my academic studies. And now, I’m working on doing the same for Japanese.

Opportunity may present itself. Or it may not. But if you aren’t ready to do the work, opportunity will move on to the next candidate–no matter how smart or well-qualified you are.

I am privileged in so many ways as a white woman. Assuredly, many of my successes have been made easier because of this fact.

But if I had relied of that fact alone, I would have floundered. Without hard work, life would have drowned me a long time ago.

If you’re feeling like life is getting you down, become defiant. Do not let hardship win out. Be proactive and knock on the door of opportunity. If that door gets slammed in your face, focus on solutions rather than bitterness or despair. Then, once you find a solution and an open door, do the work. Put your head down and make things happen.

Life and money still won’t work out the way you planned. But it’s going to be a heck of a lot easier.

Besides that, every once in a while life will surprise us and give us something better than what we were planning for, anyways.