It’s been an interesting couple of years for our finances. I’ve essentially switched career fields. Income has gone up, but is variable. My family’s needs have changed as my children get older.

Oh, and I’ve racked up what looks like consumer debt.

It makes me sick to my stomach. I hate debt unless it can be leveraged to make more money. And now I’m sitting in the thick of it.

Appearances Can Be Deceiving

I say it looks like consumer debt because of where it’s held: across five, zero-interest credit cards.

But I didn’t rack up debt buying super cute clothes or going on super luxe vacations. We do travel, but most of our travels in the past couple of years have been free or ridiculously frugal.

No, this debt comes primarily from paying health insurance premiums, which have increased by 200% since I took out my first Marketplace plan in 2015.

A Note on Health Care Premiums

Yes, I am blaming a decent portion of my debt on health care costs. I wouldn’t be the first person to do so: fifty percent of debt collections arise out of medical debt in the US.

The ACA needs to be reevaluated and tweaked.

But I am so grateful for the legislation. Without it, I wouldn’t have access to health insurance. I’d be in a high-risk pool–as I have been since birth during periods where employer-sponsored insurance wasn’t available.

Though I’m paying high premiums now, without the ACA I wouldn’t even have the ability to reconfigure my finances to accommodate the costs. My premiums, when a health insurance company would actually take me on, would be at least double the rate they are now. This is assuming no increase since I last shopped high-risk pools in the days prior to the ACA.

I also pay for a health plan with good coverage. Thank goodness I do. We’ve had to use the plan in the past few years more than I would have liked, and without it, we would have had a much more difficult time getting access to the care we needed. If we had bought a lower-tier plan, the difference in copays would have easily outweighed the increased premiums.

I’m also self-employed, and any time you run a business, you have to account for overhead costs. Health insurance is one of those costs.

Would I appreciate even lower premiums? Yes. I hope our government starts having a constructive conversation around that very topic without burning our system to the ground.

But please don’t use this post as fuel for an argument against government intervention in health insurance marketplaces. It’s not the conversation I’m trying to inspire with this post.

I’m open to differing opinions on the topic when expressed respectfully without stripping my family of their humanity, but today I just want to talk about debt.

How Did This Happen?

I’ve not been as proactive as I could have been with this debt. When premiums rose again at the start of 2017, I freaked out a little, but thought I’d get a plan together.

Obviously, I did not live up to my own expectations in a timely enough manner. We kept spending as usual. We aren’t lavish people, but there are expenses we could have cut. We needed to hustle more–even though time is at a premium.

But I got kind of overwhelmed with life and froze up. I tried my best to pay for things without credit, and when I had to finance, I made sure it was at 0% interest.

Recently, I got sick of being overwhelmed. So I turned my debt into a visual, hoping it would help me see things in another way. Hoping it would fire up some inspiration. 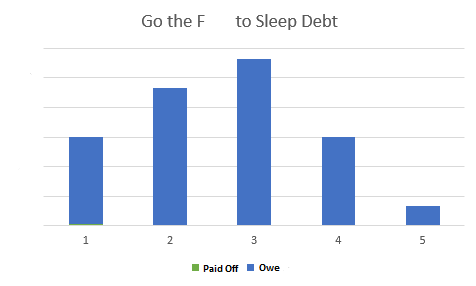 Go the Bleep to Sleep, Debt.

It wooooorkkkeeed! When I saw that chart, I instantaneously became determined to turn the entire thing green.

I thought, “Goodnight, Debt. I’ll most likely kill you in the morning.”

It was this weird mixture of The Princess Bride and this bedtime story my mom used to read to me:

I even thought about titling this post “Goodnight, Debt.”

But then I remembered two things:

In fact, this is the bedtime story that more closely relates my emotions towards my total balance, and was the inspiration for this post:

What Am I Going to Do About It?

I have this plan. It’s called: Watch My Expenses More Carefully and Hustle My Butt Off.

I think that’s really at the core of every personal finance goal ever.

It’s simple, but it’s something I’ve taken too long to pursue in 2017. I’m going to pay this off before the 0% interest periods expire. I’m not going to allow this to cripple me. I’m going to change my behavior, even though it’s inconvenient.

And, as before, I’m going to throw every spare cent that comes my way, whether through hustling or my budgeting strategy, directly at the debt before it hits my bank account.

I’ll be updating my progress at least once monthly. I rarely share specific numbers on this blog, but I will be posting my bar graph as it turns more green and less blue. If you want to stay in the loop, I highly recommend subscribing to the newsletter so you won’t miss any updates.

I’d love it if you joined me. Let’s eradicate our debt together. Let’s tell it:

Month 1: My debt is getting drowsy.

9 thoughts on “Go the Bleep to Sleep, Debt.”