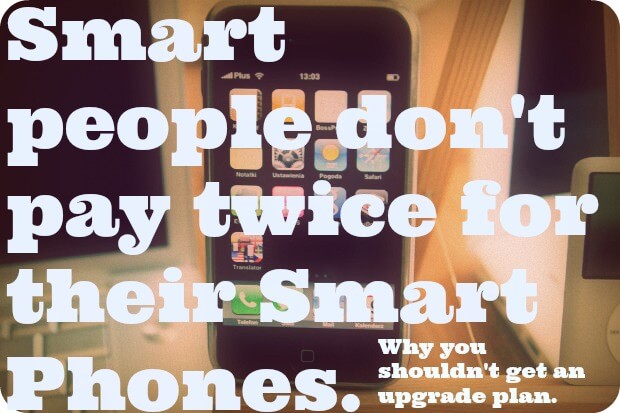 T-Mobile started this new movement with cell phone carriers: get people to pay full-price for their phones and then they can upgrade sooner. Here’s basically how these plans work:  you get your phone, agree to pay full-price, and then stretch your bill for the phone itself out over the contract period.  As long as you’ve paid a certain percentage of your device off, you have the option of upgrading your phone sooner than you normally would.

You could do that, but it would be silly.  Have you ever wondered how these companies can offer a $650 iPhone for a promotional price of $200 when you sign a new contract?  The profit loss is already built into the price of your service plan.  It’s called a phone subsidy and you’ve been paying it all along.

So now these carriers are trying to convince consumers to continue to pay the same price for service plans and then pay for the cost of the phone on top of it.  So you’re paying full price for your phone, but also paying for a subsidy charge.  You’re paying for your phone twice.  Why would anyone want to do that?  Because they’re marketing it to you really well.  By giving you the “freedom” to upgrade sooner, they can make oodles of more money.  If these plans sell enough, they may even be able to get rid of the up-front subsidized discount all together while still charging the subsidization fees.  So I’m all about everyone NOT buying one of these plans.  Because I like my subsidized discount.  I want to keep that option on the table.  And I don’t want to pay for my phone twice.

(To be fair, Verizon and AT&T are the worst culprits.  Sprint does offer you $15 off your bill a month, IF you have one of their biggest plans.  T-Mobile charges less [thus eliminating that double payment referred to above] if you have one of their upgrade plans, but there is a $10 service fee each month.  Or you could just switch to Republic Wireless and spend $20 a month on your bill instead of hundreds.)