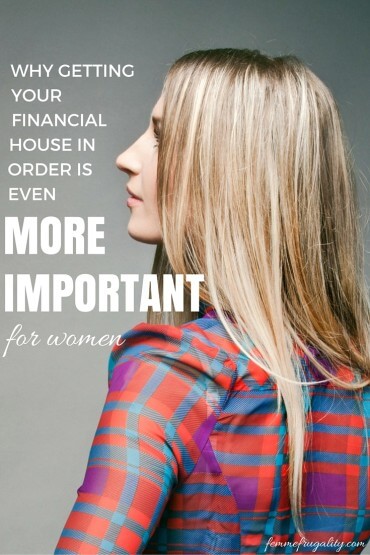 “Women with money and women in power are two uncomfortable ideas in our society.”
–Candace Bushnell

As a financial planner, I was pretty adamant when I had couples as clients that they both participated in at least the initial kickoff session. After that, if one of the two said that they were fine with not being involved going forward, then that was acceptable to me, although I always gave the non-participating spouse a one-page “to do” list if the participating spouse ever got hit by the beer truck, and got a premature opportunity to find out what was on the other side. (Besides the stories that John Edward used to tell people about their loved ones talking to them through him.)

Maybe it was because I am a male or because there was a selection bias that occurred in the types of couples that I drew as clients, but there were certainly a few instances where the wife was the one who said that her husband made the financial decisions, and she was fine with it.

Note: I’m not including same sex couples in this analysis because if you’re a same sex couple, you both face the same gender-specific issues, whereas an opposite sex couple means that the female has different financial needs than the male.

It was frustrating to me to see this situation because, like it or not, the women are much more likely to have to deal with and pick up the pieces when the husband passes away. I’ll explain more about this later.

The husband-as-lead scenario didn’t happen terribly often in my practice, maybe 20-25% of the time, but it certainly happened enough that I had a standard response to it.

The statistics about women participating in household financial decisions are mixed. A 2008 Pew Trust survey showed that families believe women make more decisions 43% of the time, whereas they divide decisions equally 31% of the time, and the man makes more 26% of the time.

On the flip side, a 2013 Fidelity survey reported that only 24% of women said that they took responsibility for day-to-day financial decisions.

Regardless of whose numbers you believe, there are a significant number of women who are punting the decisions on household finances to their spouses.

I’ll throw one more statistic to show some numerical and financial disparity.

In 2010, the RAND Corporation conducted a study relating the numeracy (math skills) of household members to overall household wealth.

According to the survey, men were more responsible for the finances than the women, with men in charge 62% of the time.

In cases where there was a 10 year or more age difference where the man was older, and the man was age 70 or older, the man made the decisions 82% of the time. This was the case, even though studies show that cognitive decline can start as early as age 60, and that math is the first skill to go.

What’s even worse, according to the RAND study, is that households where the man scored 0 on the test had him making the financial decisions 50% of the time!

How does this impact family wealth and financial well-being? Let’s look at couples who had one member score 0 and another member score 2. There were less than 20 0/3 couples out of 1,200, so there wasn’t enough data to draw conclusions.

More broadly speaking, when the less numerate spouse made decisions, the financial wealth of those couples was 14.7% less than households where the spouses were equally numerate.

Adhering to traditionalist values, particularly when the financial decision-maker isn’t the mathlete (that’s a word…trust me!) is really harmful to your long-term nest egg’s health.

However, that’s not the only issue that causes women to come out on the short end of the stick when they don’t take part in the financial decisions.

On Average, Women Earn Less Than Men Over Their Careers

This quotation from Catalyst sums it up:

“No matter what their race/ethnicity, age, occupation, or education, all women are impacted by the gender wage gap.”

The Catalyst study finds that, on average, in 2013, women earned 78% of what men earned in income.

How much will each have at the end of the year at age 60?

Those differences add up over time. It’s a 28.2% difference over 30 years for the man.

So, just from a pure actuarial standpoint, women have a longer retirement to plan for. They can either work longer (which stinks if your husband is already retired) or plan so that they have enough assets to carry on when they, statistically speaking, outlive their spouse.

However, that would only be true if you married someone your age.

The average age difference for a heterosexual couple is 2.3 years, meaning that men are usually 2.3 years older than the women they marry.

So, women should plan on living between 6.5 and 7 years longer than their male spouses.

That’d be great if the female spouse was about 6.6 years older than her husband, but as we saw above, that rarely happens.

On average, a woman has to make the financial decisions for 6 ½ to 7 years without her spouse, whether she wants to participate or not. Plus, she has to make those decisions when she’s likely cognitively impaired and, therefore, susceptible to making the wrong moves.

Ladies, that’s not a position you want to be in, I can assure you! How many of you have heard the anecdotes of the widow who doesn’t even know how to balance the checkbook?

I’m sure you’re not in that position because you’re Frugal Femmes, but even then, you need to be actively participating in the financial decisions, from budgeting to investing to insurance to estate planning.

I’m not really going to go into the nuts and bolts of budgeting here; you can swing a dead cat at the Internet and find budgeting articles.

However, you do need to make sure that you’re setting aside enough money each month to save for your retirement.

We calculate the number such that the youngest spouse lives to be 100. There is a less than 1% chance that both spouses will be alive at that point, but you do not want to run out of money on your 99th birthday. That’s about the worst possible scenario you could face if you’re alive at that point.

I like the anti-budget. Figure out how much you need to save and then work backwards from there.

Again, I am not going to tell you what to invest in. In general, invest in low-cost indexed funds for most of your investments. Don’t try to swing for the fences lest you fall prey to the myriad behavioral biases that make the average investor a chump compared to market averages.

The rule of thumb that we use is for asset allocation – 100 – the age of the younger spouse for equities and the rest for fixed income. Easy peasy. Rebalance. Use proper asset allocation. Don’t follow the herd and try to figure out what the market is doing from what Jim Cramer prognosticates.

By the way, repeat after me (loudly, preferably if you’re reading this from a Starbucks):

INSURANCE IS NOT AN INVESTMENT. IT IS INSURANCE!

Yes, there are a few exceptions to this rule, but they are few and far between.

This can be a touchy subject, particularly if you have a blended family. Remember, if your spouse passes away, you still have to look out for Number One (the person you see in the mirror).

You want to make sure that you have your documents together and affairs in order, to include not only a will, but other documents like advanced medical directives and do not resuscitate orders (if either of you doesn’t wish to be resuscitated in the event of an unlikely recovery).

It’s painful to go through. You’re forced to face your own and your spouse’s mortality in a way that no other event, aside from the death or disability of someone close to you forces you to do.

I’m Convinced! What Do I Do?

Personal finance, in general, should not be a lot of work on a month-to-month or even a year-to-year basis. Set a plan and execute it.

Even if you don’t want to be involved in the nuts and bolts, if you’re a woman, you’re, in all probability, going to have to be the one to handle the day-to-day finances at some point. Make sure that you’re prepared for that day so that, if it comes, you know what to do and do not get taken advantage of.

Jason Hull, CFP®, is the CTO of the online, comprehensive financial planning service myFinancialAnswers. He is an Army veteran, earned a BS in Engineering from the United States Military Academy at West Point, and earned a MBA from the University of Virginia’s Darden Graduate School of Business.

This post is a part of Women’s Money Week. If you want to join us, you can do so here. Please tag this post with #WMWeek17 when sharing on social media.

26 thoughts on “Getting Finances in Order is Imperative for Women”