I saw this on Pinterest and had to try it.  I had a scarf that wasn’t really wide enough to keep the wind out, and even though I don’t have a sewing machine my remedial hand-sewing skills were enough to get it done.  I think it took the original artist about 10 minutes to make her old scarf into a hat.  For me, by hand, it took an hour.  Still, not bad. Lay your scarf flat on the ground, inside out.
Fold it in half, then cut it several inches longer than you think you’ll need it to be.
Pin the two long sides.  Sew those sides together using a whipstitch/overhand. 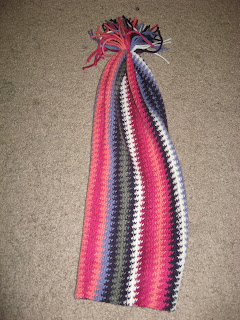 Flip the scarf inside-right.  (Should be a long tube of fabric.)
Put a simple, single running stitch in the top near the fringe.
Wrap your thread below the fringe several times to make your pom-pom.
Use your needle to create a knot that is sewn into the fabric.  Cut off excess thread.
(Note:  My thread was thick enough to hold this.  If yours isn’t, consider using yarn or quilting thread.) 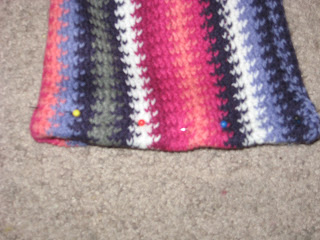 Turn the bottom of the hat up in on itself about 1/2 inch to an inch.
Hem the bottom of the hat so it will not fray using a running stitch.
Your hat should be too long.  Fold the hemmed edge inside until your hat is an appropriate length.
Do a small, single running stitch over the side hems several times to keep the hat’s length.
(Similar to back stitch.)
If your hat’s still too long, you can fold up the bottom and have a brim without anymore sewing.
If your fringe is so long that it looks silly, trim it down until it looks like a pom-pom.
Congrats.  You have a new hat. 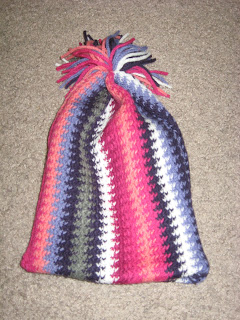 *Part of Frugal Friday at Life as Mom*

35 thoughts on “Upcycle Scarves into Hats”