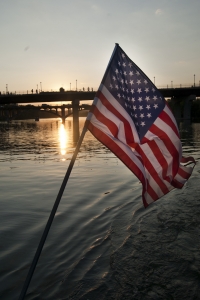 70% of American’s believe that it is harder to become rich than it ever has been in our country’s short history, according to a relatively recent study by Princeton Survey Research Associates International, with a poor outlook: 80%  believe that things will either worsen or stay the same in the next ten years.  Given, these types of studies are prone to bias, largely because respondents are thinking about the recent past instead of the last decade or so.  Still, this is a little disheartening, right?

The Conundrum
Against this lies another poll conducted by the same organization in which roughly one-third of respondents said it was very or somewhat likely that they would attain wealth.  While this is close to overlapping with the 30%  of respondents from the first survey that didn’t believe that it’s harder to become rich than it ever had been, bear in mind that the other possible responses to the first survey were easier (9%), no different (18%), and don’t know (3%).  So how can only 9% of respondents feel it’s easier to be rich now than ever before while 33% feel that it is very or somewhat likely they will attain wealth?  I will tell you: because it depends on the question.

The Questions
Do you think it is easier or harder to get rich today than it used to be?  This is a question that requires a bit of probing into one’s own feeling of worth and opportunity.  The way it is posed conjures up our past failures and missed opportunities, perhaps our frustration with our jobs and careers, taxes and bills, or how the higher education system is structured.  Some may say it is easier now than ever before, due to the relatively low-cost of internet ventures, etc., while others are not very familiar with internet based services, let alone programming and so may disagree.   I think this latter group is the majority of America, and so the results of this question suggest that opportunities for common-folk to attain wealth through the means that are available to them (primarily save and invest) seem a dryer well than before.

Do you think you will be rich one day?  This question is more straight forward than the last on an emotive level.  The question is asking you to take into account future what-ifs and could be’s and thus dwell less on your current state of affairs.  If you are like most American’s your current state of affairs kinda sucks.  But the future?  Who knows…?  This reading is complicated by those 80% who responded that over the next ten years things would worsen or stay the same in regards to becoming rich, but I think this is more a factor of the preceding question than of America’s true optimism.  One sets up the other.

Seeking an Entrepreneurial Attitude
American’s probably don’t like to think too hard about their prospects of becoming rich.  Our country was founded on the idea that anyone can rise to achieve their dream, and as a nation I think we hold this ideal fervently.  The two questions above seek to expose the tangibility of our dreams, should they be tied in some way to wealth.  Although as I point out they are of differing emotional complexity, I do not think there are answers to be found here as of now.  I think that America is currently doing a lot of soul searching, and perhaps a little fretting over whether or not the dog-days of entrepreneurship are over with (has entrepreneurship been reduced to “entrepreneurial attitude”; a term on a job description?).  Surveys need to be taken with a crack rock-sized grain of salt, but in overlaying these two it does appear as if Americans feel down, but not out.

7 thoughts on “Becoming Rich in America: A Guest Post”