A few weeks ago, I woke up to this pleasant email in my inbox: 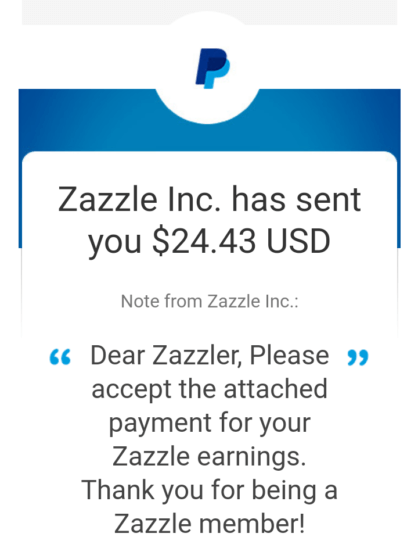 It took me a minute to figure out what I was looking at. It was money I wasn’t expecting, and I was really hoping it wasn’t a mistake or phishing tactic.

Then I remembered that years and years ago, I opened up a shop on Zazzle. I designed t-shirts which very few people bought. The payout threshold was either $50 or $100, and I didn’t think I’d ever meet it.

I guess they got sick of holding onto my money, or–more likely–there’s some type of rule about how long they can hold onto payouts.

My income situation is a heck of a lot better than it was back then, but I’m in no way, shape or form above getting excited about an unexpected $24.43!

It’s the opposite of the sunk cost fallacy. The original fallacy is that you feel like you’ve already invested too much in something to give up–even when you’re clearly not going to come out ahead.

In my inverse fallacy, I had already given up on getting ahead–so much so that my current self is grateful to my past self for spending hours designing t-shirts so I could have $24.43 six years later.

It doesn’t make sense. Twenty-four forty-three isn’t a good return on my time investment. But because I’m so far removed from the experience temporally, I’m totally cool with that return. Because I had given up on ever receiving anything for it.

This post was originally going to be titled, My First Passive Income. But then I realized this was not, in fact, my first experience with passive income.

I pull in a decent amount of money with this blog. It’s nothing to retire on, but it does help support my family. Some of that money comes from advertising. And some of it comes from affiliate sales.

I generate affiliate sales when a reader clicks on one of my affiliate’s links and makes a purchase. It doesn’t cost them anything extra to use my link. The affiliate has just arranged to pay me a commission when I refer a customer their way. I only do this with companies I like and trust.

I’ve had a mixed bag of experiences with affiliate sales. I’ve spent hours on a post, only to have it generate nothing.

I’ve had others perform ridiculously well, but they have to be updated at least once a year. I spend about the same amount of time updating these posts as I did writing them. The return is great and worth it, but I’m putting in a decent amount of maintenance hours in order to achieve that result.

I’ve had others perform pseudo decently without having to touch them after the first writing. The sales–and therefore commissions–aren’t as explosive, but they are steady and it’s almost zero maintenance. These are the posts on my blog that I consider truly passive income.

All of this got me to thinking about my philosophy on work. I grew up with the notion that you always spent your time at your labor, and were compensated commensurately.

Even after I started blogging and meeting a bunch of people who had great financial success with passive income endeavors, it all felt a little pie in the sky to me. Duplicating that success seemed less like a model and more like striking a vein of gold.

I don’t think my knee jerk reaction was wrong. Yes, there is a science you can apply to some passive income tactics, but there is always a chance you will fail.

There is always a chance you will bring in a boat load of money, but to maintain that income you’ll have to work your tail off. Which means you haven’t created passive income; you’ve created a job.

But still, there is that enticing chance that you’ll hit that vein. That steady stream of income that requires zero maintenance.

There’s a relatively high amount of risk involved when compared to traditional, time-for-money work. You can invest a lot of time into something that turns up nothing for you. If this happens, you run the risk of falling into the original sunk cost fallacy. You might wait too long to give up.

If you had just traded your time for money in the first place, you would be way further ahead. 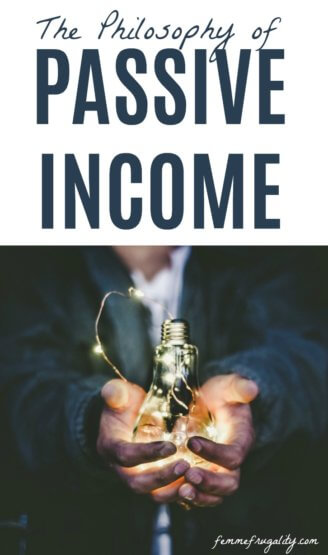 My Current Philosophy on Passive Income

I’m not against building passive income streams. I know people who have achieved success in this manner, and believe others can do it, too.

But I’m keeping my personal economy mixed. I might not strike that illusive vein of gold. Or, after I do, there may be an algorithm change that robs me of traffic and therefore that income. I’m more than pleased with and grateful for the moderate amount of success I’ve found with passive income through this site.

But I’m not putting all of my eggs into one basket. I’m simultaneously supplementing and hedging that income with time-for-money work. At the end of the day, while I like those surprise PayPal messages, I’m not comfortable enough to expect them.

7 thoughts on “Philosophy of Passive Income”