This post started out as an ode to renters’ wall paper.  As many of you know, sometimes renting can make more financial sense than buying.  The biggest thing that sucks about that is that you don’t get a whole lot of say when it comes to decorating.  I’ve only ever rented one property where the landlords were cool with us painting.  The place we live now has white, white walls, and there’s not a whole lot we can do about it.  We have a child who shares a room with us, so we thought putting renters’ wallpaper up on one wall to separate the child’s space from our own might be a good solution.  It’s not nearly as cheap as paint, but at least we would be allowed to do it.

Then reality set in.  You see, we’re not exactly on the same page when it comes to decorating.  Before we got together, we each had our own decor style.  His was random…your typical bachelor pad.  (Though thank God he wasn’t the kind to stick up pictures of half-naked girls.)  I had been married before, and after my divorce my style was more femme-power than anything else.  Anything that displayed the beauty, power, and divinity of womanhood went up.  So when we moved in together, our walls were eclectic at best.  Then we had kids.  So in addition to all of the mishmash we had before, now we had portraits of babies and finger-painted Picassos lining our walls.  I like to spread my stuff out evenly.  He likes to tack everything on the same wall until every inch is covered, leaving the rest of the apartment a blank canvas. 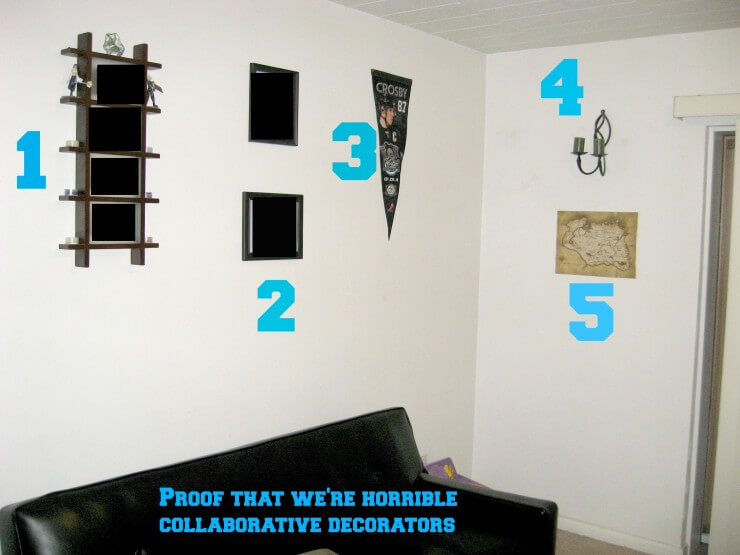 1.  Our photo frame serves as a shelving unit for candles and…Final Fantasy toys…

2. These are actually really cute pictures of our kids, but as most of you know I don’t share pictures of me or the people in my life.

3.  Sorry, Sid, you’ve got to move.  One time when I was pregnant my fiance went to pick up my prenatals for me.  They asked him what my birthday was.  “August 7, 1987.”  “Hmmm…that’s not what we have in here.”  “Oh, shoot.  That’s Sidney Crosby’s birthday.  Hold on…”  I kid you not.  And he didn’t even remember my birthday.  A friend that was with him came to the rescue with the correct date.

5.  No, this isn’t anything like a map of where we grew up or where our ancestors lived. This is a map of Skyrim.  An imaginary world.  In a video game.  I. Don’t. Get. It.

So we sat down and tried to agree on a style of renters’ wall paper.  And we couldn’t.  Every one I liked, he hated, and visa versa.  So we decided to focus on our living room instead, and had much more success.  We picked this awesome wall mural from Walls Need Love.  The best part for us was that not only could we pick the colors, we could simulate what the finished product would look like, allowing us to experiment and COMPROMISE. 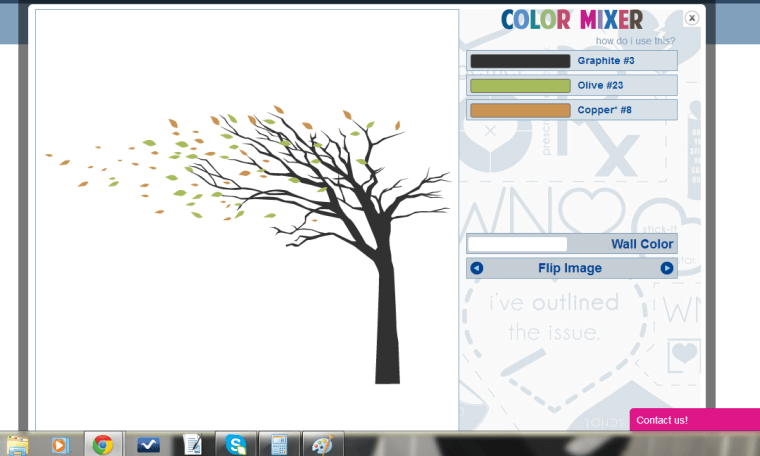 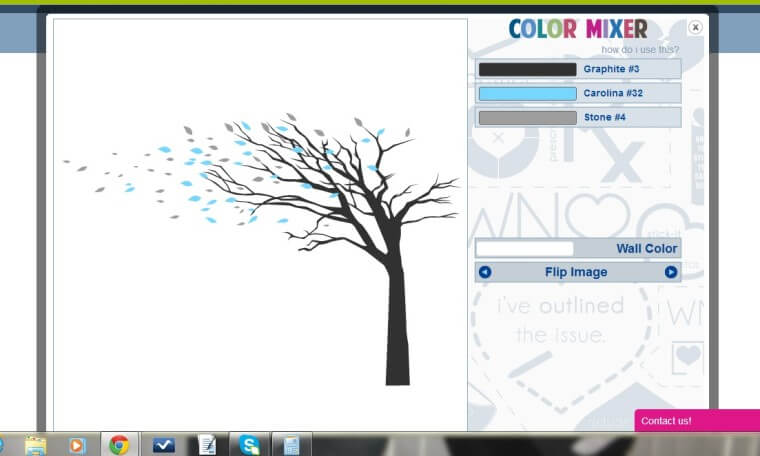 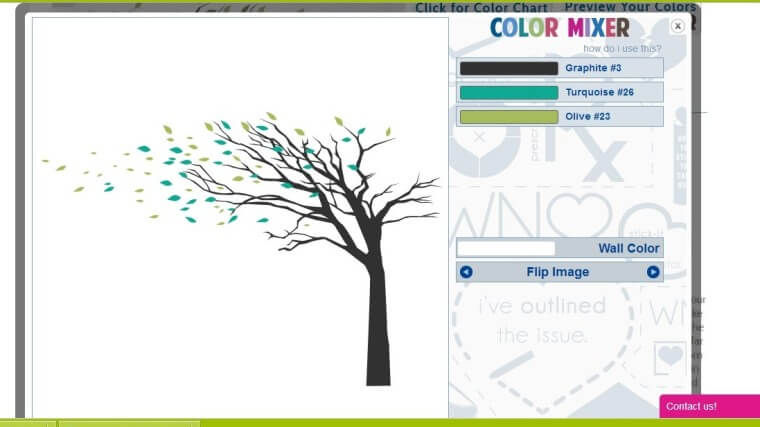 So the next step was actually putting the thing up after it arrived.  I’m going to preface this by saying it turned out awesome.  But we chose one of the most intricate designs we could have.  And we’re not the most DIY people out there on earth.  So it took us about two hours over 2 nights.  (We were glad we decided to work on it after the kids went to bed.)  For people that do this kind of artsy, DIY stuff all the time, the whole process would probably be a breeze.  You remove the sticker side of the paper and push the contact paper with the decal up where you want it.  Then you smooth it out, remove the contact paper, and voila!  Beautiful wall decal.  We kept pulling up skinny branches and not lining stuff up right.  But, remember, we’re bad at this kind of thing.  And the decal itself was VERY forgiving, allowing us to peel and readjust while sticking to the wall over and over again.  (This is a good sign that it will come down cleanly when we move out, too.)  If we did this and got it to look beautiful (which we did) then anyone can!

But if you’re like us and not necessarily the most patient or hands-on artsy person, I’d recommend getting a decal with a few less intricacies.  They have some super amazing cool ones.  And if you’re not into decals, square/rectangular removable wall paper sounds about as easy as it gets.

All of the hard work was worth it! 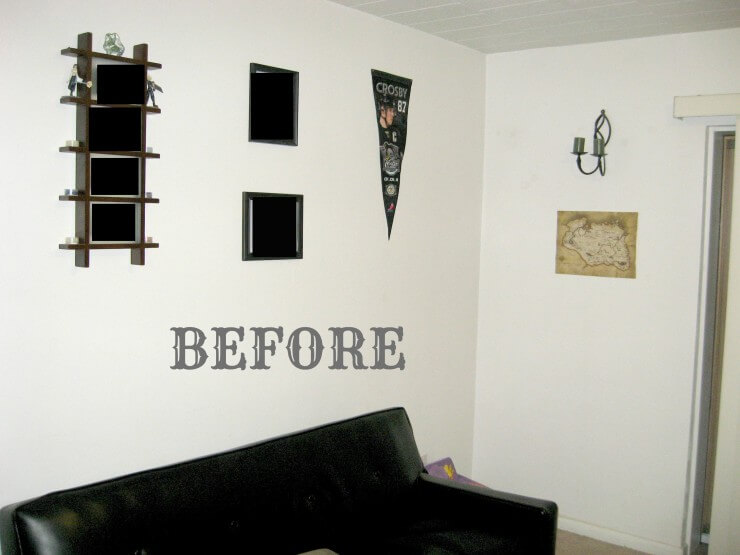 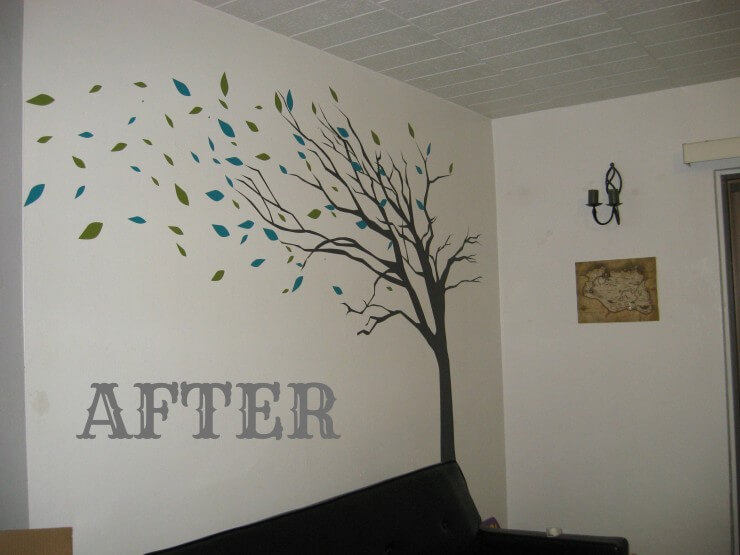 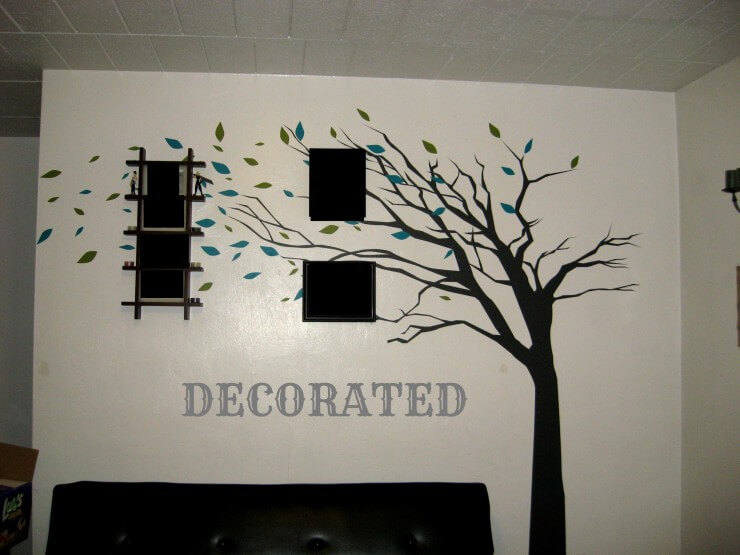 So now we have a beautiful looking family tree!  The colors actually match people’s outfits and the scenery in the photographs that I have covered up.  The sconces are the same color as the olive leaves, too.  Yuna’s dress blowing in the wind actually makes sense now. (Though the only people that sentence will make sense to are FFX fans.)  I’m actually starting to feel like we have a HOME and not just a place we rent!

The fiance thinks it looks pretty awesome, too.

The good folks at Walls Need Love, who provided us with the much needed decor, are also working with me to bring you all a giveaway!  Whether you’re a renter by choice or necessity, or simply a homeowner who thinks their designs are pretty rad, you can enter using the rafflecopter below to win $30 to WallsNeedLove.com.

29 thoughts on “Loving Your Walls as a Renter”