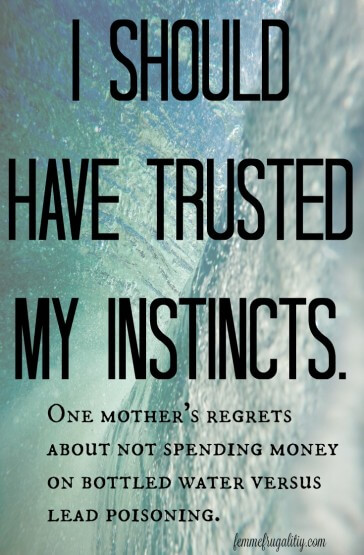 Since I became a mother, I’ve discovered new fears. A litany of them, actually. One of those fears when I was expecting was drinking water. I was so paranoid about water quality that I bought bottled. As a pregnant woman, I drank a lot of water. It was one of the few “luxuries” I allowed myself in those days.

After I had children, I was still concerned about it. So I continued to buy bottled, largely because I sometimes used formula with my children. (Primarily they were breastfed, but even then, what I was drinking would end up in their milk.) I didn’t use it 100% of the time, but it was still our primary source of drinking water.

After the formula and breastfeeding days were behind us, I eased up. Water and soil in Pittsburgh is surprisingly clean considering everything we’ve put our environment through until the 1980s. (Though our air quality is still suffering, despite us becoming a shining example of green-city renaissance.)

Plus, bottled water is expensive considering the stuff you get out of the tap is free. Stop drinking tap water and you likely won’t see a big dip in your bill.

Shortly after I stopped buying bottled, the organization that provides our water (PWSA) switched from treating our water with soda ash for corrosion prevention to caustic soda. They both prevent erosion to lead pipes, but which one you use is highly dependent on water chemistry.

They made the switch because it was cheaper, and they didn’t notify anyone they were doing it, including regulating authorities. It went on from April of 2014 to January of 2016. They don’t have hard data that shows lead levels are elevated, but it is a possibility.

From a completely anecdotal perspective, I know of at least one house that has tested their tap water and lead levels came back too high, but I do not know if there were any other extraneous factors at play.

During the time that the caustic soda was being used, they didn’t test for lead levels. We already have a higher rate of lead exposure than Flint, Michigan in Pittsburgh, and now all my worst paranoid worries are receiving some justification.

PWSA is bringing me a free water testing kit. But, and here’s the kicker, all I do is fill up a tube of water and then submit it back to them for testing. No third parties. No control for bias.

I’m going to have a hard time trusting it.

The point? I wish I had trusted my instincts. I wish I had blown money on bottled water for the past two years. Sure, I’d have a little less money, but I also wouldn’t be scheduling blood draws for my children.