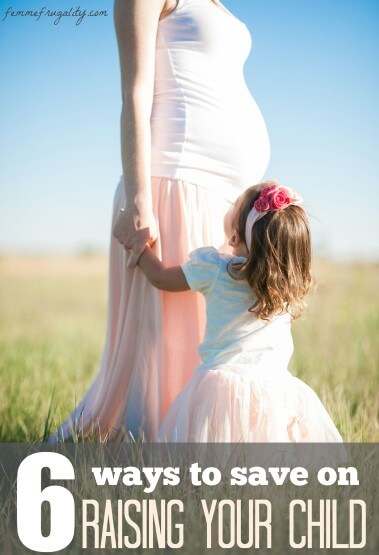 Is that the last year that data was available?
Yes.

Using those numbers, I should have spent $88,600 as a mother by now.  But I haven’t.  Not even close.  Ballpark estimate is less than a quarter of that.

A lot of our focus has been on building income over the past years.  But I’ve been taking stock lately and realized that we do live a pretty frugal lifestyle on top of that.  I guess we always have, and once we had kids we kept on with that way of thinking, even with additional mouths to feed.  We’ve saved or forgone spending at all, and it’s paid off for us big time.

Without further ado, here’s a list of how to save money raising a child, brought to you by La Maison du Frugality:

1. We haven’t upgraded our living space.

The number one contributing to factor to that huge, average number is housing.  It makes  up 30%.  When we first moved into our apartment, it was just the two of us, and it was moderately spacious.  Now, with kids, it’s not.  We share a room with one of them, in fact.  It’s not ideal, and it’s not always comfortable, but we’re used to it.  I want to change it, which is why we’re saving up to buy a home, but with rent increases in the area lately, after we have that initial down payment we won’t be spending a ton more than our current rent.  There’s a little bit of justification behind that statement, as we will have to start paying for extra utilities and  house maintenance.  But by not moving to another rental while we save for our bigger goal, we’ve saved about $500/month based on the market in our area.

2.  I had killer insurance while pregnant.

I haven’t been insured the entire time my kids have been alive, but I was lucky enough to be covered and have great insurance while I was pregnant.  And my kids have always been insured.  On top of good insurance cutting down drastically on out-of-pocket costs, from pre-natal appointments to delivery room (though those aren’t included in the $245,340,) I also made sure I took advantage of every facet of my insurance.  And I mean every facet.  I was able to get a lot of those expensive things my kids needed in those early days via insurance instead of out of my own pocket.

A lot of this is due to my husband’s good relationship with his bosses at work, ability to set his own schedule there, and the ability to set his own schedule at school within reason.  For the most part, when he works, I’m home and visa versa.  But there are still occasions where our schedules overlap, and we need help.  He’s from the area, and most of my family stuck around, so we have baby-sitters galore who are generous enough to help out with the kids when we need it at no cost.  There are certain advantages to staying in your hometown.

My oldest recently and suddenly outgrew all their clothes.  My husband was freaking out, saying we had to go buy an entire new wardrobe.  I took him into the bedroom and opened the closet.  I pulled out a bag full of the next size clothes, designated for summer.  There was a whole other one for winter.  We didn’t need to go shopping.

So we don’t spend a ton of money on clothes.  Turns out we have a fair number of friends and family members with kids slightly older than ours, and we’re not afraid of hand-me-downs.  For those times when we don’t have something we need given to us (which is awesomely generous of our friends and family, by the way,) we head to the resale store and get $1 jeans or $7 brand-name sneakers.

I do know how to sew.  My skills are remedial.  But they’re enough.  I’ve been able to mend clothing instead of tossing and replacing.  I’ve been able to stitch up stuffed teddy bears and giant turtles.  For the clothes that are too worn to resell or pass on, I save them up and use them to make blankets and quilts.   Fixing is almost always cheaper than replacing.

6.  I seek out free kids’ entertainment.

Summer is especially awesome for free kids’ events here in Pittsburgh, but there’s really something going on all year.  I’ve used library events year round.  In the fall there are RADical Days where you can do seemingly everything in the city at least once for free.  Because one of us or the other has been a student for most of the time we’ve had kids, we’ve been eligible for attraction discounts or freebies either from the venue itself or through the student life office.  If you look around, there’s almost always something to do for free.  Even if you can’t find an “event,” kids are down for anything if you’re excited about it.  Going to the park has never failed to disappoint mine, and on rainy days, the indoor playground at your local mall can do wonders as long as you don’t get sucked into any unplanned shopping while you are there.

So those are the top six ways we’ve saved or avoided spending at all, and spent considerably less than the $88k+ we should have.  What are some of yours?

19 thoughts on “How to Save Money Raising a Child”