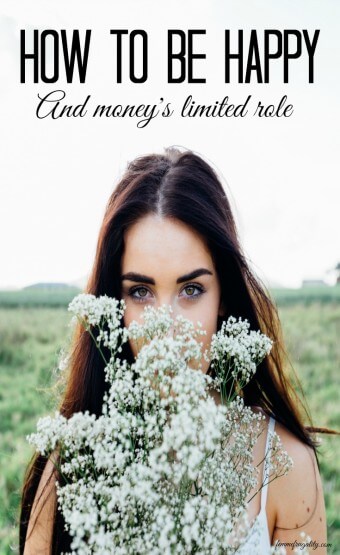 I’ve known for a while that money isn’t the key to happiness.  Or at least not the whole key.  But did you know there’s people that have actually researched the psychology of happiness?  With psychology being essentially the study of why people do what they do, these people have literally been studying why happy people are happy for the past couple of decades.  And they made this documentary about it called happy.  I watched it.  And now you get to read my rehash.

Money Only Buys a Certain Amount of Happiness

According to the film, 50% of our happiness levels are genetic.  I’ll wait till there’s a few more decades of research to decide if I think these numbers are concrete or even accurate.  But we’ll work off this model for now.

10% of your happiness is determined by your environment, which in the way our society is set up, can depend in part on how much money you have coming in.

There’s been tons of research, both highlighted in the film and otherwise, that says after you hit a certain point, making more money does not equate to more happiness.  This point is somewhere around $50,000-$75,000/year.

Now, if you’re making 10k a year and all of a sudden you start making 100k, your happiness is bound to skyrocket.  But shooting for a mil isn’t going to sustain the ascent of good feelings.  In fact, there’s research showing that people who work too hard or make enough money to participate in the consumer culture at a ridiculous pace are actually UNHAPPIER.

So, let’s be liberal and say the whole 10% of your environmental happiness is determined by how much cash you make.  (This is totally untrue.  But it illustrates that at absolute most, money determines 10%!  Not a lot!)  What’s the remaining 40% determined by?

People who change up their routine tend to be happier.  It may just be my circle, but I know so many people who absolutely love travel.  And I’m guessing the reason why is because it’s a new experience, and those contribute to our happiness. But travel can be expensive.  I advocate for it when budgeted for, but there are other ways to change your routine without saving for twelve months:

To be continued Wednesday….
This post, which contains affiliate links, first appeared on Femme Frugality on September 24, 2012.