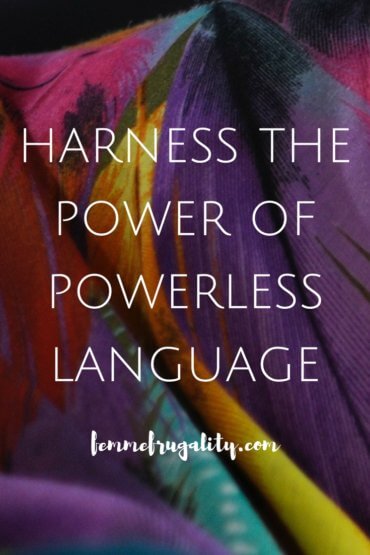 As women, we often are victims of prejudice in the workplace. If we say what we mean, what we want, or what we know, we get labelled as a b!@%*. If we soften our language, we tend to get trampled all over.

Examples of hedges in powerless language are, “I think,” “seem to,” and “possibly.” The standard argument is that they weaken our language and invite people to doubt us or our credibility.

Powerless Speech Can Be Powerful

While this can sometimes be true, some of the greatest persuasive speakers ever used what we label “powerless language” to get their points across. Think Benjamin Franklin and Plato’s version of Socrates. They didn’t call it powerless language, though.

These men had learned early on that being brash was not going to get them anywhere. They had brilliant minds, but no one was going to hear what they had to say if their arguments were cocky and left no room for any error by the speaker.

Cockiness and arrogance tend to make people solidify their original opinion rather than change it.

Using eironeia changed Benjamin Franklin’s life. People started listening to and respecting him, which opened up the many career paths he was able to successfully pursue.

Here are some words  he suggested throwing out the window in his autobiography:

These words tell the person you’re talking to that if they disagree with you they are a moron. When you make someone feel like a moron, they’re not likely to agree or ever want to deal with you again.  This is true not just when it’s a woman speaking the words, but a man, too.

Franklin replaced these powerful words with powerless hedges. Some examples he gave are eerily similar to the words we’re told to avoid as they’re powerless or “too feminine.”

“I convcieve,” or “I apprehend,” are an eighteenth century way of saying, “I think.”

Though if the language register in your situation were high enough, Franklin’s words verbatim could still be appropriate today.

Another of his examples, “It appears to me…” is essentially the same thing as saying, “It seems…”

His example of “…it is so if I am not mistaken,” could be replaced by the single word, “possibly.”

Give Powerless Language Legs to Stand On

Franklin always backed up his hedges with good arguments and solid facts. If we say, “I think you did the numbers wrong,” we’re not going to get a very good response.

However, if we change our language we can still use a hedge, come across as professional, and not make people hate us:

“I think there may be an error in the numbers.  I’m looking at the district’s sales for February and they don’t seem to match this chart.”

We’ve used hedges–“I think,” “may be,” and “don’t seem”–and we’ve presented facts.  We’ve removed the negative judgement on our subject by focusing on the error in the work, not the person who made the error.

We can rage on in our head, “I know that you are incompetent!” But while those words may fall into the powerful category, they are not an effective way to problem solve in a work environment regardless of your gender.

There are still some hedges you should avoid. Avoid anything that doesn’t sound professional. Things like, “I’m sort of busy right now,” or, “I’m kind of disappointed in the quality of your work,” might be phrases you would use with friends, but are inappropriate for the work place.

They don’t diminish your language because they are powerless; they can be used just as effectively as the other hedges we looked at above, but only if you’re using them in the right setting. The language register at work is higher. Period. Even if you wear jeans and a tee.

The next time someone tells you powerless language is completely ineffective and feminine, encourage them to read Franklin, Plato, and Socrates. Used properly, a little powerless language can go a long way in influencing others and gaining the respect of your coworkers and superiors.

12 thoughts on “Harness the Power of Powerless Language”