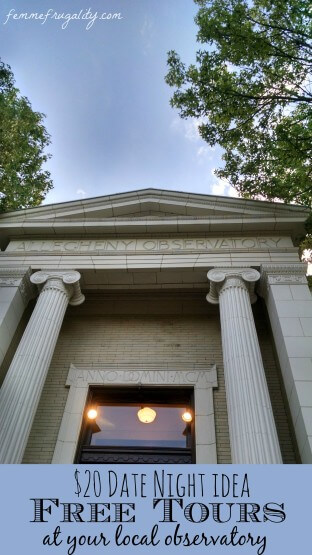 A couple of months ago, Toni from Debt Free Divas shared her family’s $20 Date Night as a part of Couple Money‘s $20 Date Night Challenge.  It’s an awesome concept, and I wanted to try it on for size.

The fact that this was a couple of months ago shows you how often the husband and I get out together. I’m cutting us some slack because we did get out together while we were in Myrtle Beach, and there’s no point in stressing over date night.  That kind of defeats the purpose, although we would like to do it more.

For our $20 date night, we went on an Allegheny Observatory tour.  They give free tours on Thursday nights April thru August, and Friday nights April thru November.  I’ve been meaning to check this out for a while, and this was the perfect excuse.  (If you want to do something similar, observatories across the country run free tours.)

The night started out with a lecture.  To give you an idea of how that went, I’m a history nerd and was riveted.   I had to keep nudging the husband to wake him up.  I guess he wasn’t as into it as I was.

But we learned things about the first unmanned airplane, the importance of Pittsburgh (the very room we were in, actually,) in keeping standardized time for the railroads back in the day to prevent crashes, and, of course, telescopes.  Specifically how they could use them to look at the sun without blinding themselves.  (I won’t get into too much detail, because apparently it’s boring material to people other than me, but if you’ve ever been to DC and seen Langley anything, suffice it to say that we had him first.)

Aside from Langley, we learned about a man named John Brashear.  Even the husband stayed awake for this part.  He was a man who didn’t have any education after age 15.  A man who worked in the steel mills.  But when he was a kid, a man had come through his town with a telescope, showing him the cosmos.  He never forgot it, and taught himself how to make  lenses. Refractors, actually.  In the shed in his back yard.

He wrote to Langley, asking him for advice on his most recent specimen that he had DIYed at home.  Langley gave him an audience, told him to do nothing more because it was darn near perfect, and asked him which optometry school he had went to.

He hadn’t.  He was just brilliant with his hands.  He was also incredibly skilled with architecture, and was a pro at raising funds for the observatory.  He became an important figure in Pittsburgh’s history, all because of his curiosity, and the audacity he possessed to write a letter to the best scientist alive.

Moral of the story:  Be curious.  Be audacious. 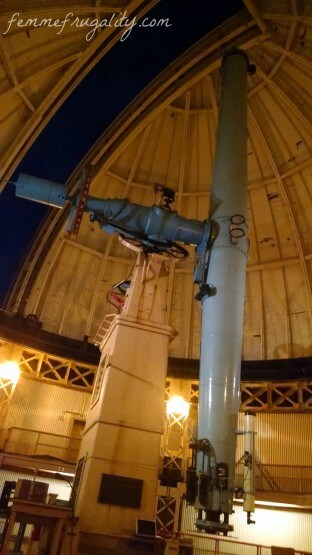 Finally, to the husband’s relief, we went in to see the telescopes.  The first one was massive. The ceiling creaked and slid along some old trolley wheels attached to dome to reveal the night sky.  I had no idea that the Allegheny Observatory was so important.  Apparently, this photographic telescope’s images were the ones used to proof every astronomer’s theories about comets and other cosmic happenings until at least the late 90s.  In the early 2000s, it stopped operation because there’s some new computer photographic technology they use that the telescope isn’t fitted for yet.  If you want to dork out on that more, you can read more about the Thaw telescope here.

Then we actually got to look though a telescope at the night sky.  It was the same telescope Langley was looking through when he discovered that Saturn’s rings weren’t solid.  I have no idea how he did that, because when we looked through, it looked like this. No joke.  Like some old-school cartoon rendition.

So that was our $20 date night.  The tour was free, but we went out to grab some eats before, and there our $20 went.  We had some good food, learned some cool stuff (or slept,) and got to use the equipment to spy on celestial bodies.  All in all, a fun night.  Thinking we’ll have to find some more $20 date nights around the city to share.

What have you done for frugal date nights?  Would love to hear your ideas in the comments!