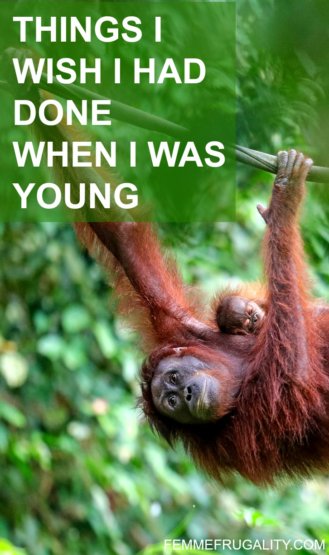 My life has been anything but traditional. Most traditional life paths look like this–at least, if we millennials had gotten the opportunity to pursue the path our parents’ generation preached would lead to success:

I’ve been married a couple times now, finished school nontraditionally, and had kids before I got that degree.

None of those steps happened in order. But for the most part, I haven’t bemoaned the consequences. My journey has been unique, and it’s been one with plenty of opportunities for self-actualization.

That being said, lately there have been some opportunities I’ve become aware of that I totally wish I could pursue. If I didn’t want to keep the kids in this school district. If I didn’t have this business that I’m kind of in love with running.

And so I’m putting it out there on the internet that if you’re young and have relatively few responsibilities, go. Do these things. Or the things you dream of doing. Because right now is the time. As you get older, you will have more responsibilities. Sometimes these responsibilities are restrictive.

If you’re anything like me, you feel like your responsibilities are already enough at your age. And they are. I respect you for meeting them. But believe me when I say they will get heavier as you age. Sometimes that’s a beautiful thing. But sometimes it can prevent you from applying for a job in the jungle to work with orangutans.

Things I Wish I Had Done When I Was Younger

Get a job in the jungle to work with orangutans.

A pet interest of mine lately has become primatology. I never thought this would be a huge interest for me. Animals are cool, but I never felt particularly drawn to study them.

But go watch YouTube videos about bonobos, chimpanzees, gorillas and orangutans. It’s incredible to watch these creatures, our closest cousins, go about their lives. Experience their emotions. Use tools. Care for each other.

So much of what we consider human can be observed in these practices. This, plus access to a language both species can apparently gain fluency in, American Sign Language (ASL), has my brain spinning lately. Especially as so many of the great apes are going extinct because of habitat destruction and the bush meat trade, both of which are caused by humans.

So when I saw an open position at a research outpost my heart soared and the immediately turned sour. Would I love to go work in the jungle to study one of the gentlest of the great apes–the orangutan?

But again, kids. Business. These are also things I love and want to be spending time at, and both demand attention.

Why did I not do ish like this when I was younger? I think back and can point to a million reasons why, many of them related to my lack of college education at the time. I wish I had known more about grants and scholarships back then.

I have very few excuses for not doing this. When I was extremely young, I did live abroad. But I was so young I don’t remember too much about it.

When I was college-aged, I could have gotten a job at a hostel or done work online. Apparently, I could have also volunteered as an orangutan researcher in the jungles of Indonesia. In a low enough cost-of-living area, moving abroad would have been more than feasible. But none of these possibilities even crossed my mind.

Study abroad did, though. That’s one thing that stings about not doing college traditionally: I pretty much missed out on study abroad opportunities. I still dream about them now, but pursuing a semester abroad at my age has a lot more complications as far as visas, childcare, and those children’s educational needs go.

I’m not saying it will never happen. But living abroad probably isn’t in the cards in the near future here. Doesn’t mean I’ll stop dreaming, though. 😉

Okay, so I didn’t know what the hell index funds were when I was younger. I wouldn’t find out about those until J L Collins introduced them to me when I was slightly older but still young.

And I thought you only had enough money to invest if you were rich. And I was decidedly broke, though I did manage to get together decent emergency funds from time to time.

But had I gone to college traditionally I would have graduated at the peak of the Recession. Stocks were so cheeeeeaaaaaappppp. I would have so much more saved for retirement now, but back then I didn’t even know how to open an IRA and robo advisors didn’t exist. I could be wrong, but I feel like you generally needed more to get started back in the day (which really and truly wasn’t all that long ago.)

But I can still help the orangutans.

Just because I didn’t do some of these things when I was younger doesn’t mean I can’t transfer some of the enjoyment I would get from them into my life.

I may not be able to go back in time and invest from the age of 18, but I can regularly save for my retirement today. Future me will be grateful I started when I did rather than waiting until later. The best time to plant a tree was thirty years ago, but the second best time is now.

I may not be able to live abroad at the moment, but I can bring the joy of travel into my kids’ lives by exposing them to it early via vacations and long weekends, building it into the budget all the while.

And I may not be able to go research orangutans in the jungle, but I can still help the effort to save them by donating to the research center’s cause.

Life doesn’t necessarily get worse as you get older. Your joy just changes forms.