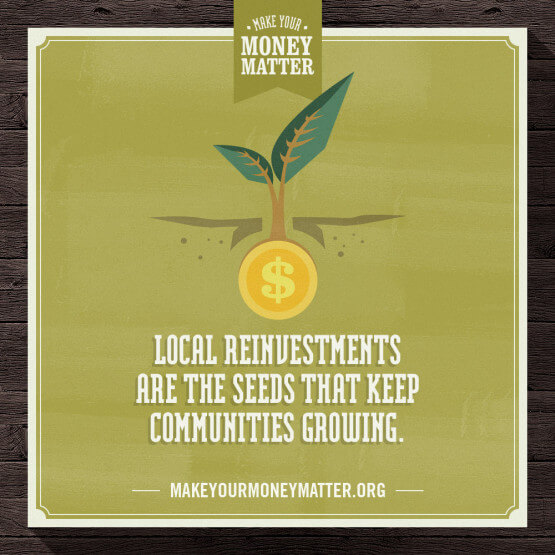 I’ve written before about my travels to Acadia National Park.  It’s located on an island off the cost of Maine.  That beautiful piece of land is called Mount Desert Island, and the community effectively banned all chain stores.  Well, almost all.  You can find a Subway.  (Apparently they had to agree to some pretty strict rules to get in at that location.)  But you won’t find a Wal-Mart.  Or a McDonalds.  Instead, every business is locally owned.  It’s a beautiful thing.  As a tourist, my favorite shops are the stores that sell art.  Art on lobster claws, art on Christmas ornaments, art on canvas, art in the form of bath bombs or candles, art as hand-woven clothing and handmade jewelry.  But there’s small businesses everywhere from the grocery stores to the whale watching boats.

Thinking about Maine’s small businesses made me think about how other local ventures have effected my life and how I make my money matter.  And I realized it’s this:  no matter how unbearable I think a place is, the small businesses give me an excuse to love it.

I used to live in North Carolina.  I actually enjoyed my time there a lot, but there were times I’d worry about how dangerous my town could be.  At first, I was afraid to explore at all.  Then I heard about the angel store.  They pretty much only sold angel figurines, and it boasted that it was the biggest one in the country.  At the time, I was weirdly obsessed with angel figurines.  (Even weirder because this was a while ago and I’m still in my 20s; I was young, and had a grandmother’s hobby.)  I was so excited to check it out that I got over my fears, googled the directions, and went for it.  I arrived at a single floor building.  I noticed the restaurant next door as I walked into the modest sized building.  I was floored.  There were figurines of all different sizes and designs filling every nook and cranny of this place.  All of them angels.  Every time I thought I had found the last room another doorway appeared and presented me with another opportunity for awe and amazement.

I bought an angel that day.  And many days thereafter.  If I was feeling bummed out or just wanted to buy a birthday gift…to myself….I’d find myself wandering the saint-filled antechambers, selecting the perfect trophy to bring home.  But winged souvenirs weren’t the only thing that small business gave me; it also gave me the motivation to be brave.  It got me out my door and into my community.  It forced me to get lost on the new streets that I called home, and encouraged me to venture a little further each time I went out. I discovered that daylight and confidence are a girl’s best friend when it comes to living your life in a town that can be dangerous.  And I didn’t just live my life; I enjoyed it.

I also lived in a place that was the polar opposite:  Eastern Idaho.  The region I lived in was ridiculously safe, but no where near as diverse.  I missed the culture I had known growing up in Pittsburgh and living in “dangerous” places like the one in North Carolina.  I had some really amazing co-workers that made the whole thing bearable, but when I wasn’t at work I would get bored.  And lonely.

I had a friend back in North Carolina who had gotten me into scrap booking.   I’m not very crafty, and I hated how people would make their glorified photo albums all cutesy and kitschy and ruin their photos with stickers that would be outdated in five years.  This friend was like me, and we really turned scrap booking into an attractive, but comparatively minimalist art form.  So I’d get bored and lonely.  And I’d catch up on scrap booking wishing she were there.

I ran out of paper or something and heard that there was a place in town that had a pretty good selection.

When I think of my hometown, I think of local food and stores in strip malls that sell sports memorabilia.  But mostly I think of the South Side.  In the daytime.  At night, it’s a barhopping scene, but during the day there’s every type of kitschy shop you could hope for.  There’s vintage clothing stores.  There’s an amazing geeky comic book store.  There’s a coffee shop that sells local artists’ work. There’s a bike repair shop.  There’s a community.

And that’s a short list of what small businesses have given me.  Community.  Stimulation.  Bravery.  It’s enough to make me jealous of the people on Mount Desert Island who get to experience it every time they shop.  For anything.  Except Subway.

Have you ever had a personal adventure with a small business?  Has it provided you with an unexpected experience?

*This post is sponsored by Make Your Money Matter, in association with PSCU, though all views are my own.*

19 thoughts on “The Island of Small Businesses”